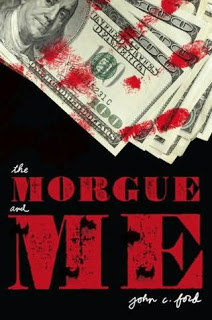 John C. Ford is the first-time author of The Morgue and Me (Viking, 2009). From the promotional copy:

Christopher just needed a job to kill time the summer after high school graduation. He didn’t expect it to be in the morgue. Or that he would accidentally discover a murder cover-up.

Or that his discovery would lead him to a full-blown investigation involving bribery, kidnappings, more murders…and his best friend.

And he certainly could never have predicted that Tina—loud, insanely hot, ambitious newspaper reporter Tina—would be his partner.

But all of that did happen. And Christopher’s life will never be the same.

With plenty of plot twists, red herrings, and dry wit, The Morgue and Me is a page-turning modern take on the classic detective genre.

As a contemporary fiction writer, how did you find the voice of your first-person protagonist?

I won’t say it was magic, but I was lucky to tap into my main character’s voice right from the opening lines of my first draft. The book starts with a prologue in which an 18-year-old boy, Christopher, reveals that he has shot someone. (You don’t know why or how, and I’m not about to spoil things here.)

I liked the idea for the prologue–if nothing else, it’s dramatic. As a bonus, it had shades of the opening scene in the noir film “Double Indemnity,” and The Morgue and Me is something of a YA update on those great noir stories.

Nobody would (or should) care about the “Double Indemnity” allusion, but it got me thinking. In “Double Indemnity,” the main character is a jaded insurance salesman. Certainly, an 18-year-old’s frame of mind would be much different than his, but how? And then I thought…he’s embarrassed. He’s an 18-year-old kid, embarrassed by all the attention this shooting is getting in the press. So I wrote:

When you’re eighteen years old and you shoot somebody in a public place at two in the morning, of course you expect some attention. Especially when it’s the person I shot, and especially when you’re found on the scene with that person at your feet, gasping away in a pool of blood that seeps around your shoes. Still, I find it really embarrassing.

It’s a wildly inappropriate reaction (someone’s been shot, after all), but it also rang true. And more than anything else did, it really keyed me in to what this kid’s voice was going to be like.

One other thing I did is make a list of 20 things that indicated something to me about Christopher’s character. He’s a photographer, for instance, because he’s an observer of people. And he has an MP3 version of Orson Welles’s “War of the Worlds” radio broadcast, because he’s attracted to crazy tales.

Some of these things made it into the novel (photography) and some didn’t (“War of the Worlds”), but all of them helped me see him more clearly. For other significant characters, I did lists of 10.

I love this question, because it isn’t even close.

Without doubt, the book that proved most useful to me was How to Write a Mystery by Larry Beinhart (Ballantine Books, 1996). The title, I hasten to add, is not its greatest strength. It sounds like the book wouldn’t be useful to people who aren’t writing mysteries. Don’t be fooled! Virtually all of its lessons (in chapters on Scene Construction, Openings, Clarity, Character, etc. etc.) apply to all novels.

What makes the book so wonderful is the extreme specificity with which Mr. Beinhart breaks down abstract concepts.

Now of course, we writers like to feed our souls with inspirational words on the mystical writing process, and rightly so. And for those purposes, I would direct everyone to Bird by Bird by Anne Lamott (Anchor Books, 1995) and On Writing by Stephen King (Scribner, 2000).

But at a certain point, you want to know the nitty gritty. The nuts-and-bolts of, say, plotting a novel. This is where I found many writing guides lacking, but How to Write a Mystery contains endless riches.

Take, for instance, the subject of sex scenes. A topic that would seem to elude useful, specific instruction. But here’s what the book says:

“A good sex scene, like any other good scene, is a matter of construction. Problem, movement toward a solution (setup), a surprise solution (payoff). If it’s not the end of the book, it should create a new problem that will require a new solution . . . .”

It goes on to give examples. This is concrete advice that, to me at least, gave a whole new insight into how a sex scene (or, since I don’t really write sex scenes, any scene with a romantic angle) should function. Plotting, character, and anything else you’d want to know about get this same treatment.

The book is extremely smart about the writing process, and also very funny. And, in its own, plain-spoken way, it also provides some of that good old soul-feeding stuff.

As an unpublished writer getting beaten over the head with statistics on how hard it is get published, I found this passage tremendously encouraging: “If you can write a clear sentence, if you can organize your thoughts, if you know the field and love it, and if you will make the commitment, you can probably write a salable book.”

I highlighted it in my copy. But really, you could highlight the whole book.

Read “Cover Story: The Morgue and Me” by John C. Ford from Crowe’s Nest. Peek: “The cover of my book has a home here. It could fit, of one piece with my ramshackle library. The one that fed my imagination in high school, that took me to dangerous places, that made me think in exciting ways, that made me want to write.”