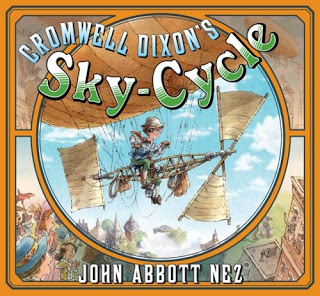 I’d have to say it’s the freedom of creating books that I like best about my life as an artist.

If the creative spark remains bright, it keeps me working. It stops being work once I’ve found my way into that “zone.” When the creative focus is really humming along, making art or writing doesn’t seem like work at all. I might redraw an image eight times, and it scarcely occurs to me that I’m working. I can spend two days writing up in a new book idea and it never seems like work.

Contrarily, if that key initial inspiration was lacking…then each new drawing would seem like endless drudgery.

So I guess it’s the freedom to pursue my fascinations that probably makes my creative life most enjoyable.

My favorite book ideas often arrive about 3:45 am. If I like them enough, then I’ll find it worth my while to crawl out to the kitchen table and scribble them down on the back of a grocery list.

I’ve had ideas for books appear in the oddest places….some of them out of thin air almost. Ideas might appear as a doodle. I was inspired by the the shape of a shadow on my living room chair for the character of one book I wrote.

One day I walked through a parking lot in the rain and the shape of a crumpled piece of paper inspired an entire idea for a story. So inspiration can be weird to say the least! Of course art needs limits and order, but the initial origins of ideas remains mysterious and amazing to me. 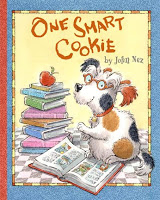 My previous book, One Smart Cookie (Albert Whitman, 2005), was inspired by the title to a post on the Internet.

I was reading a title that had the phrase “Good read, Dog!” in it. Somehow just this phrase clicked together instantly to inspire a story about a dog who could read. The story mostly fell into place from that odd beginning.

One Smart Cookie is a story about a family where it’s Cookie, the dog, who is the main reader in the family, since the children are preoccupied with video games and painting. I think it was a very timely theme…since there is a lot of that going on in the modern electronic world today with people attached more to their cell phone texting than to the real world.

It’s the richness of imagination that enables one to thrive, I think…though that may be more a thriving of imagination than finances. Often it seems one is lucky to just survive in this business, especially in this current economic time of cutbacks.

With freelancing it’s always feast or famine. So very often just surviving ought to be considered something of a victory. I do think it’s always important to keep as many irons in the fire as possible.

I know that for me, having the ability to work doing a range of illustration styles, licensed character illustration, digital art, and my own writing helps to keep me busy.

If you were writing your recipe for success, how would you proportion out the time and effort you spend researching, writing, marketing manuscripts, dealing with business correspondence, doing online promotion, doing real-space publicity, speaking at events, and/or teaching/critiquing? What about this combination works for you? 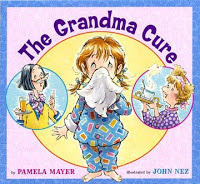 I think I might have to rewrite that recipe actually.

By far my favorite aspect of bookmaking is working on new stories and drawings. Believe it or not, I’ve only had two book signings in the last 20 years…so plainly I’m not so great at that.

Luckily, I’m usually too busy working on a new project to do much else…which is what I’d much rather do.

As for the nuts-and-bolts of career promotion, I find that the U.S. Postal service seems to be the most effective and least expensive means of getting things accomplished. When I’m not working on a project, I’ll be busy with new direct mail promotions, updating my website or sending new dummies around to editors. The world of children’s-book publishing seems to be a very small place, so my mailing list is usually under a hundred.

I think a freelance working life in publishing is a lot like fishing. One puts out the bait…setting out a lot of lines…and then we wait for a nibble. Sometimes it ends with just a nibble. Other times the bobber goes all the way under and you’ve landed a big fish. Sometimes the process can be exciting…or dispiriting.

Often getting results can be a cumulative process. Maybe after getting three rejections from an editor, I’ll finally get invited to do something new. But it might not have happened without the first three rejections.

And speaking of rejections…they are a dismal fact of life for freelancers. The freelancer’s life is filled with rejections. Sometimes they roll off my back like water off a duck’s back… and sometimes they don’t. I know even world-class artists and authors get rejected…so it’s a constant psychological battle. But we just have to keep plugging away.

What do you love most about being an author-illustrator? Why?

I love the imagination involved. I like that quote of Einstein‘s–“Imagination is more important than knowledge.”

Call it freedom…call it escapism…the two seem related I suppose. But if it wasn’t for the freedom of being able to imagine our own dreams, I’d think we bookmakers would be in a terrible fix. Without freedom of imagination, we might as well be writing product manuals for linoleum installation.

I believe it’s a privilege and honor to work making books for children. I think childhood is an ideal and magical time of life. It’s when the wonders of the world seem the most real and accessible, before life gets bogged down with the cares of being a grownup. So I definitely think anyone is lucky to be making pictures and stories for children’s books.

I’d say the highlight of my professional career has been getting my own authored books published and to be recognized for my writing. Maybe I’m just used to being an illustrator, but I think authors get more respect and attention than artists. 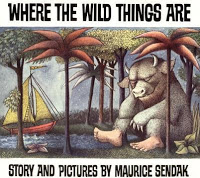 Since the majority of my career has been in illustration, it’s been a struggle to be taken seriously as a writer.

My college degree was in English, and my illustration has been 95% self taught. I dropped out of art school after one semester because I couldn’t afford it…though I did get to take a class with Maurice Sendak. That class was definitely a highlight.

Most of my professional highlights have been personal accomplishments of my own…when I feel like I’m on the right path and possibly doing something worthwhile as a creative artist.

When I finish a book, and it finally arrives on the porch in a box from UPS…and I’m pleased with how it came out…that would certainly qualify a highlight.

And I’d say another highlight was the first time I tried illustrating a book with a computer and it all worked out just as I had planned.

Of course this business definitely has it’s flip-side. For me, making a living with publishing and freelancing is a Pandora’s Box.

There are all sorts of awful things about it–unpredictable income, always wracking your brain for a new direction, never knowing where the next project will come from. And then there are days when I literally don’t have a clue what to do next.

Finally, there’s always hope…the fact that sometimes all it takes is one new client and you’re happily busy for the next year. But like riding a flying bicycle, I’d say freelancing is not an advisable activity for everyone.

When you know who you are and it’s easy to decide what’s important and what to say “no” to. Then it can sort of feel like you’re on the right path of success.

One thing I really find difficult about publishing is that no matter how successful you are, it’s easy to feel overwhelmed by the tidal wave of books in the crowded marketplace.

When I walked around the mid-winter ALA in Seattle I was totally overwhelmed by the zillions of books everywhere. I hear the summer ALA and Book Expo are ever more crowded. So how is it possible for anyone to ever stand out?

I think it’s a better idea to look at things through the lens of our own personal achievements instead. And maybe the most important thing of all is to remember to find a way to enjoy the process without expectations too far beyond that. Nevermind who’s winning what prize or whose book is on the top of the heap. We are lucky we can spend our days working on the ideas and images that make books.

I think the artists and authors I admire most are those who have succeeded in both realms…business and art. The skill set required to do that is extremely rare, I think.

Cromwell Dixon’s Sky-Cycle was a very fun book to do. And I just loved trying to capture all the elaborate fashions and settings of the period.

This book is the amazing true story of America’s forgotten “Boy Aeronaut,” who actually built and flew his own flying bicycle over the skyscrapers of Columbus, Ohio in 1907. It’s a real “boy’s book,” filled with amazing homemade inventions in Cromwell Dixon’s workshop.

It’s a true story of adventure, determination, courage and perseverance. 1907 was an amazing age. It was a period when an obsession with flying swept the nation. For the first time in history, people were flying and even building flying machines in their own backyards.

I’d hope it might encourage today’s children to get out from behind their computers and go build something out in their backyards.

What role did Cynsations play in your acquisition process?

One day I was totally stumped about where to send a new dummy book I had made–(Cromwell Dixon’s Sky-Cycle). I was searching online and happened across this great list of editors on the Cynsations site. It was a lifesaver.

Maybe it was just luck, but following that lead, I somehow managed to have my book forwarded to Timothy Travaglini at Putnam, who liked the book enough to buy it.

I greatly appreciate the informal yet very informative interviews about the various editors listed on Cynsations. So often I am flummoxed wondering where to send a new book dummy, so this helpful information source was wonderful to find.