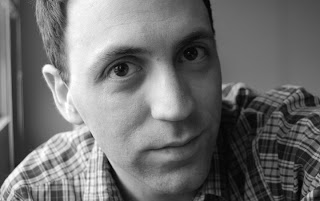 Daniel Kraus is the first-time author of The Monster Variations (Delacorte, 2009). From the promotional copy:

Someone is killing boys in a small town. The murder weapon is a truck, and the only protection is a curfew enacted to keep kids off the streets.

But it’s summer—and that alone is worth the risk of staying out late for James, Willie, and Reggie.

Willie, who lost his arm in the first hit-and-run attack, finds it hard to keep up with his two best friends as they leave childhood behind. All of them are changing, hounded by their parents, hunted by the killer, and haunted by the “monster,” a dead thing that guards the dangerous gateway between youth and manhood.

But that’s not all: shadowing the boys everywhere is Mel Herman, the mysterious and brilliant bully whose dark secrets may hold the key to their survival.

As the summer burns away, these forces collide, and it will take compassion, brains, and guts for the boys to overcome their demons—and not become monsters themselves.

In this chilling and poignant debut novel, Daniel Kraus deftly explores the choices boys grapple with and the revelations that occur as they become men. 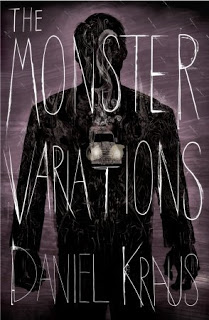 Up until recently, I’ve been a plunger. Not just a plunger, but a base jumper. I like digging myself out of difficult spots.

With The Monster Variations, I began with this sentence: “Then he realized his arm was gone.”

That’s exciting to me, that potential of taking something inexplicable and maybe horrible, and then making sense of it, and then, if I’m lucky, making it meaningful, too.

Much of the book unfolded that way, with me making rather dangerous leaps and then seeing if I could catch hold of anything on the way down. There’s a magic to this approach that I think most writers can appreciate: you don’t know where you’re headed, there are no expectations, and things could go terribly wrong. But when it goes right, it goes really right.

I’m finishing up my second book for Delacorte, Rotters, and from a plot perspective, it’s far more ambitious than The Monster Variations and required months of research and plotting.

So that has been an entirely different experience, one in which I felt safer because I had a guide, but also forced me to really push against that guide when the urge struck, which was often.

As a horror writer, what first attracted you to that literary tradition? Have you been a long-time horror reader? Did a particular book or books inspire you?

It’s almost false advertising to call The Monster Variations “horror,” as there is nothing supernatural about it. In fact, it’s rather pastoral in stretches.

A friend described it as Ray Bradbury‘s Dandelion Wine (1957)–except just the parts with the serial killer slinking through the night. That’s about an accurate of a description I’ve heard so far. So, yes, it’s scary in parts, but it’s the kind of scary that comes from the threat of your world being taken apart by a violent, uncontrollable force, in this case a hit-and-run killer.

I didn’t start reading Bradbury until I was in college. But from maybe fifth grade through the end of high school, I pumped Stephen King directly into my veins. So I think there is something of his plotting DNA that has mixed with mine.

With The Monster Variations, the obvious touchstone is his novella “The Body” from Different Seasons (Viking, 1982) or the movie version, “Stand by Me” (1986).

With my next book, Rotters, a horror epic about grave robbing, the best touchstone is probably Pet Sematary (Doubleday, 1983).

So while King is sort of my narrative compass, on a sentence level I share a lot more with Bradbury and modern, non-horror writers that are lumped into more of a “literary fiction” pile.

The majority of my adult life has been spent reading these types of books and so what has come out from me has been a hybrid, something I’ve heard called “literary horror.” I don’t know exactly what that means, and I reserve the right to shift dramatically in the future, but for the time being, I think I can live with it.

Books by Booklist Authors: Dan Kraus’ The Monster Variations by Gillian Engberg from Booklist. Peek: “‘Great successes change the directions of lives, but for some reason that seems kind of obvious. It’s the failures—and our public or private reactions to those failures—that I think really kick our lives down certain paths.'”