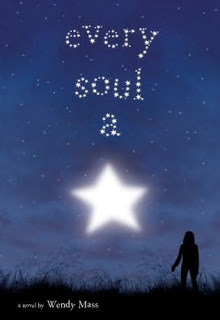 Wendy Mass on Wendy Mass: “According to Wikipedia, I play the harp, have eight kids (four sets of twins), have written 23 books in 23 years, and can run a two minute mile. So I guess we’ll leave it at that.” Note: actual wiki.

Voracious. I used to read with a flashlight under the covers even when it wasn’t nighttime! I’ve always liked the privacy factor that goes along with reading, like you’ve hidden yourself away in a secret world known only to you and the characters in the book.

Why do you write for kids and young adults today?

At the risk of sounding corny, I honestly wanted to give something back to that time in my life when reading meant so much to me, when it helped me figure out what kind of person I wanted to be, when it offered me an escape.

I also think writers have a voice that stops at a certain age. For me, that age is between 12 and 16.

A long and winding path indeed. I wrote everything from baby books with squeaky toys embedded in them, to newspaper articles about new stores opening in town, to some things that I can’t even mention because they’re too embarrassing and/or incriminating.

I was pretty relentless though, in the pursuit of publishing fiction. When people tell me they’re going to stop writing after one rejection letter or even after ten rejection letters, I sit them down and show them my lovely stack of them. Every “no” brings you closer to “yes.”

Could you fill us in on your back-list titles, highlighting as you see fit?

Each book feels like a child, and I always feel bad if one doesn’t get the attention that another does. I don’t often hear much about Leap Day, for instance, and that was my favorite one to write. I’ve been really blessed that A Mango-Shaped Space and Jeremy Fink have been brought into schools in the past few years, bringing new readers along with them.

Reading a lot of books in various genres helped me to get comfortable with the structure of a novel. Through trial and error and a lot of writing classes, I’ve managed to figure out what works best for me in terms of the actual writing process—I generally sketch out most of the book first. That’s not to say that each time I start one I don’t panic, because I do.

Congratulations on Every Soul a Star (Little, Brown, 2008)! Could you tell us a little about the novel? What was your initial inspiration for writing the story?

I was walking through a book store one day, and my eyes rested on the magazine rack. An issue of “Sky & Telescope” with a picture of a recent solar eclipse on the cover caught my attention. By the time I’d finished reading one or two of the articles, I knew I had my idea.

When I first wrote the proposal and sent it to my editor, she brought it to the pub committee and they turned it down. I really didn’t want to let go of the idea though, so I reworked it, submitted it again, and this time they accepted it.

I also changed the title. It used to be The Boy Who Chased the Sun. I might still use that title one day, maybe for a picture book on the same topic.

The book alternates between the points of view of three very different main characters. It took a while for me to figure out how to keep track of what everyone was doing, and to make sure each of them was growing and changing and moving the story forward. I wound up making a big chart in order to keep track of everything, and that helped a lot.

As for research, I loved learning about eclipses and astronomy in general. From the moment I saw Saturn through a telescope at a local observatory, I was hooked. I bought my own telescope that is now pretty much just a lightning rod in my backyard. Sigh. Isn’t that always the way.

Do you work with a critique group or partner or exclusively with your editor? Why does that approach work for you?

I’ve been with the same small critique group for about five years. This works really well for me, because I’m the kind of person who enjoys seeing that red pen all over my page. It also motivates me to get the pages done in time for each meeting.

In terms of marketing and other outreach, how do you connect your books to young readers?

Skywriting? I have pages on MySpace and Facebook, and a blog on my web site, although I don’t update it nearly enough. I try to make the web site really thorough and welcoming.

I also try to reply to every email a reader sends, but I’m slipping far behind, a fact which haunts me.

Recently I’ve been doing a lot of school visits, which I think is a great way to connect with readers.

How do you balance your writing life against the demands of being an author (events, marketing, business correspondence, etc.)?

Add three-year-old twins to all that, and it’s certainly a juggling act. I wind up going places to write that don’t have the Internet available so I don’t get distracted reading the latest antics of Hollywood.

I generally save the evenings after aforementioned twins are asleep for business-related stuff. Usually in front of the television.

To my youngest beginning-writer-self, I’d tell her not to stop keeping a diary in fifth grade just because her sister stole it and blabbed its contents to the school. It would be great to have a record of my life growing up, rather than my often faulty memory.

I’d have told my older-beginning-writer-self to chill out more. I’d also thank her for not giving up when things looked bleak.

Besides the usual advice to read, take classes, keep a notebook for story ideas, go to conferences, network with other writers, I’d say to tell the story you want to tell, the story that only you can tell. Don’t give up unless it’s not fun anymore.

Next up is a middle grade novel called Finally. It’s about a girl who turns twelve and can finally do all the things her parents promised she could do at twelve. Things don’t quite work out as she’d planned.

After that comes The Candymaker’s Son, still a work in progress, about my favorite topic—candy!

So far, what is your favorite children’s or YA book of 2009 and why?

Positively by Courtney Sheinmel (Simon & Schuster, September 2009). It’s the story of a girl living with H.I.V, which doesn’t sound like a fun topic, but is actually beautifully written, uplifting and funny, and will make a big splash, I’m sure.

Laugh at my kids. They fall asleep at night with their arms around their favorite books (which change daily, but usually contain a pigeon, bunny, elephant or piggy (they’re big Mo Willems fans!)

Occasionally I get to sleep, too. Only occasionally.

2 thoughts on “Author Interview: Wendy Mass on Every Soul a Star”