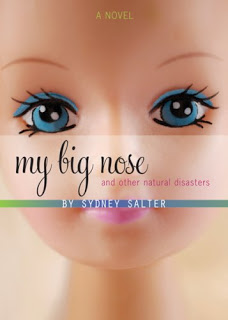 Sydney Salter is the debut author of My Big Nose and Other Natural Disasters (HM Harcourt/Graphia, 2009). From the promotional copy:

It’s the end of junior year, and summer is about to begin. The Summer of Passion, to be exact, when Jory Michaels plans to explore all the possibilities of the future–and, with any luck, score a boyfriend in the process.

But Jory has a problem. A big problem. A curvy, honking, bumpy, problem in the form of her Super Schnozz, the one thing standing between Jory and happiness.

And now, with the Summer of Passion stretched before her like an open road, she’s determined for Super Schnozz to disappear. Jory takes a job delivering wedding cakes to save up for a nose job at the end of the summer; she even keeps a book filled with magazine cutouts of perfect noses to show the doctor.

But nothing is ever easy for accident-prone Jory–and before she knows it, her Summer of Passion falls apart faster than the delivery van she crashes.

In her hilarious and heartbreaking debut novel, Sydney Salter delivers a story about broadening your horizons, accepting yourself, and finding love right under your nose. 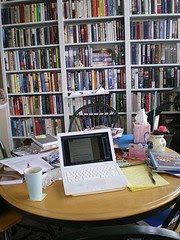 Usually, I write at a table in my living room near my bookshelves with a view of my neighborhood. I love all the light and open space.

My workday follows my daughters’ school day. That’s the ideal.

The reality is that I’ve learned to write anywhere and everywhere.

Last summer I finished a draft of a novel, one chapter a day, by taking my daughters to the bookstore, buying them each a frappuccino, shooing them into the children’s section, and asking them not to talk to me for an hour while I wrote in the café.

I have revised in airports and mall food courts. I have written chapters on ferry boats, numerous Starbucks locations, and in my car while waiting for my daughter to finish her guitar lesson.

I have discovered that sometimes a change in scenery—one in which I don’t have to look at my dirty dishes while pouring a cup of tea—helps motivate me.

When I’m writing a first draft, I keep track of my daily word count as well as my writing location (just for fun).

I don’t really feel qualified to answer this question, but that’s how most of book promotion has felt to me: absolutely daunting.

Realizing that I had a lot to learn about virtual marketing, I joined online debut author groups. The Class of 2k9 focuses on promoting books to booksellers, librarians, and teachers, but we’ve become a support group as well. The 2009 Debutantes offers support, but those authors also generously share their marketing savvy. Authors Now is a website that provides visibility for authors and information for the reading community.

I wish I’d gotten involved in online writing communities earlier. Sites like www.verlakay.com are a great networking resource for pre-published and published authors.

I’ve started blogging (www.mybignose.blogspot.com), but I’m struggling to find the time to post while keeping up with writing, revisions, and promotion.

I wish I’d developed the habit earlier; I might also have developed a larger blog following. And, of course, I’m also busy friending everyone on various social networking sites.

The personal networking I’ve done over the years has helped tremendously with book promotion. For years I’ve belonged to local writing groups, and I’m a Regional Advisor for the Society of Children’s Writers & Illustrators (Utah/So. Idaho).

Knowing that speaking is an important part of a writing career, I’ve always pushed myself out of my comfort zone to accept public speaking opportunities. I worked as a library storytime reader, taught writing at my daughter’s school, spoke to local writing groups, and created conference workshops (sometimes researching topics I didn’t know much about). Not only did these appearances help me become comfortable with speaking, I’ve made connections with people who are excited about my upcoming books.

I’ve found support from so many people. My family members have rallied, sending out email blasts to pre-order my books. My brother has given me pep-talks as well as contacted his friends who have media ties. My sister-in-law has used her teaching connections to help me get speaking engagements in my hometown. My husband is encouraging me to speak at an out-of-state SCBWI conference on his birthday. No one in my family is going to let me ignore book promotion!