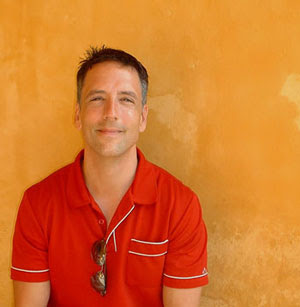 Gene Brenek is the illustrator behind the tie-in designs for Tantalize (Candlewick, 2007, 2008) and Eternal (Candlewick, 2009) used on T-shirts and other items available from the Sanguini’s store at Cafe Press.

Gene is an author, illustrator, and advertising professional. In 2009, Gene received an MFA in Writing for Children and Young Adults from Vermont College of Fine Arts.

He makes his home in sunny Austin, Texas; with Michael and John-John. (One’s an international spy, the other coughs up fur balls. Unfortunately, Mr. Brenek’s not at liberty to disclose who is who.) Read a previous Cynsations interview with Gene.

You last spoke to Cynsations in February 2007 about designing the Sanguini’s logos for Tantalize. What is new in your writing and artistic life since then?

This past January, I received a masters in writing for children and young adults from Vermont College. Currently my writing is at both ends of the spectrum, in terms of age. I’ve just finished an alphabet book and a YA psychological thriller. Maybe I could combine the two, do a psychological-thriller-alphabet book along the lines of Ed Gorey, one of my all-time favorite author-illustrators.

In the interim, you have added new Sanguini‘s T-shirts! Could you tell us about your approach to them? Note: Sanguini’s is the fictional vampire restaurant from Tantalize. 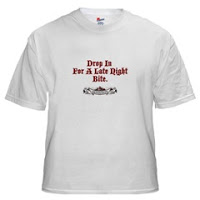 Sure. I felt like the original designs captured the spooky aspects of Tantalize. And yes, I added a couple of new designs in that same vein (pun intended).

However, I also wanted to explore the humor that I found throughout the novel. I thought that Quincie would be the type of girl who would display an “I Heart Baby Squirrel” or a “Drop In For A Late Night Bite” [see image] T-shirt at Sanguini’s. I think Quincie’s like most teens I know, very savvy when it comes to marketing.

Thanks so much for the new designs to celebrate Eternal (Candlewick, 2009)! Give us the full creative low-down. What were your sources of inspiration, and what where the major challenges along the way?

The biggest challenge was creating a style for the Eternal designs that was unique to this particular story, while at the same time keeping the essence of what I had already created with the Sanguini’s artwork. This meant keeping the red-and-black color palette.

The designs originated right out of the characters if you will. Daddy Dracul deserved an old-school crest [see below]. The type of artwork that seemed like it had been in the family since the days of yore when Vlad, The Impaler was skewering anything that moved. 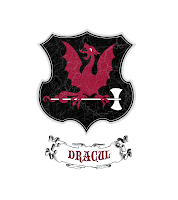 Miranda’s sensibilities determined the other designs. She’s a girly-girl princess who knows how to swing a battle-axe. I started playing around with the shape of a tiara. It reminded me of an upside-down bat and things just came together for me [see below].

I got such a kick out of the descriptions of Joshua and Zachary. According to Zach, being blessed with good hair is one of the assets to being an angel. I had to use a typeface that really captured the essence of heavenly hair. As much work as these guardian angels do, they deserved their own T-shirt [see below].

As a YA reader, what were your favorite books of 2008?

The Compound by S. A. Bodeen (author interview).

And finally, if you could be a character in my Gothic universe, who would you choose and why?

Probably Brenek. There’s something about his character that appealed to me. I can’t quite put my finger on it.

No honestly, I was a big fan of Joshua. I’m a sucker (pun intended) for sidekicks that have a great sense of humor about them. Plus, practically everyone else seemed to have a big target on his back. I love to read about characters in danger, but I wouldn’t want to be one.

I like angels that have a bit of a sarcastic streak. I’m hoping we see more of Josh in the next book. (Hint, hint.) 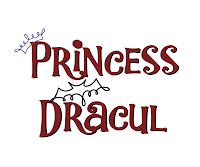