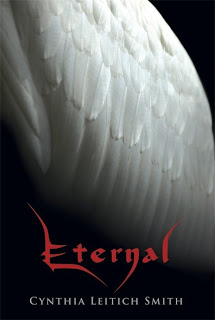 Eternal by Cynthia Leitich Smith (Candlewick, Feb. 10, 2009) is now available! Read an excerpt from Candlewick Press. From the promotional copy:

“At last, Miranda is the life of the party: all she had to do was die.

“Elevated and adopted by none other than the reigning King of the Mantle of Dracul, Miranda goes from high-school theater wannabe to glamorous royal fiend overnight.

“Meanwhile, her reckless and adoring guardian angel, Zachary, demoted to human guise as the princess’s personal assistant, has his work cut out for him trying to save his girl’s soul and plan the Master’s fast-approaching Death Day gala.

“In alternating points of view, Miranda and Zachary navigate a cut-throat eternal aristocracy as they play out a dangerous and darkly hilarious love story for the ages.”

Note: Here are the answers to a few, quick questions I’ve been asked of late about this new release.

The books are set in the same universe, and both are something of a conversation between me and Abraham Stoker about his classic Dracula (1897), especially with regard to such themes as redemption, gender, and the dark “other,” which in his day meant Eastern European.

That said, the most obvious difference is that they feature different main characters. (Careful readers may catch a glimpse of a Tantalize character cameo in Eternal, though.) The two casts will crossover in my next prose novel, Blessed (Candlewick, TBA), which I’m working on now. And by the way, I’m shooting for one hell of a finale. Eternal also expands the multi-creature-verse to include angels and a new type of shape shifter.

Beyond that… Tantalize is about more “common man” characters in the universe. Quincie and Kieren are high school students. She works in her family restaurant. He’s the studious son of a wedding planner (okay, mama is also a werewolf) and engineering professor. Even the vampires are well integrated into the everyday world. They have jobs, raise kids, and, sure, eat people. But not constantly and not without having to think hard about covering their tracks.

Eternal takes us to the major players–the vampire royalty, the guardian-and-arch angels. These characters on the front lines at a time when those lines are blurring. In that way, the novel is more escapist, what with its castles and ballgowns and blood-wine cellar. It’s also perhaps more romantic, more horrific, more fine detailed.

Did any personal experiences inspire aspects of the book?

When I was in ninth grade, my English teacher had the class read A Tale of Two Cities by Charles Dickens (1859) aloud in turn over the course of the semester.

I distinctly remember grumbling that the only good parts were the first and last lines. But looking back, much of it did sink in, and fellow lit geeks will find nods aplenty in Eternal. You don’t need to know Tale or Dracula to understand my novel, but if you do, the conversation of books is in play.

Drawing again on my adolescence, it was clear that Miranda’s dream would be to become an actor. I never longed for the spotlight myself, but I distinctly remember wishing I could shrug off my more conventional high school activities and join the Thespians. I admired their talent and independence and how much happier they seemed than everyone else, especially at a time when I was often just going through the expected motions.

[Note: If you were a Thespian from my high school and are thinking, what?!, I’m sure y’all had your massive teen challenges just like everyone else. But well, you know, greener pastures. And trust me, you were much more awesome than I could’ve ever hoped to be.]

Beyond that, I set Eternal partially in Dallas, partially in Austin, and mostly in Chicago. All of these are cities that I’ve lived in and love. Miranda is from Dallas. After his “fall,” Zachary spends time in Austin, and the two finally meet face-to-face in a fictional North Shore suburb of Chicago. From there, the story also takes them into the Windy City itself.

Here’s a quick excerpt from Zachary (complete with photo illustration): 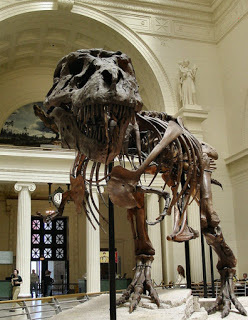 I’m dwarfed by the tyrannosaur skeleton at the Field Museum. Forty-two feet long, thirteen-feet tall at the hips. It was found buried in the Hell Creek Formation in 1990.

The last time good and evil went head-to-head, no punches pulled, the dinosaurs died out. Lava flowed in oceans as large as the United States. Tsunamis tore apart the shores. Fire engulfed forests, and the sky turned to ash.

According to Angels to Zombies and the scuttlebutt I remember from upstairs, we’re shaping up for another showdown. And this lame-ass angel?

I can’t even handle one teenage vampire princess. 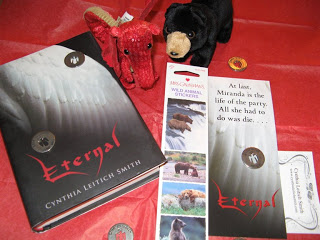 Congratulations to the Winners of the Eternal Grand Prize Giveaway (click link for details):

Third Prize: Nancy in California; Colleen in New Jersey; Erica in Alabama; Beth in North Carolina; Stephanie in Oregon; Mirella in New Mexico; Shelly in Texas; Moriah in South Carolina; Zachary in Missouri; Melynda in Florida; Barbara in Texas; Kassandra in New Mexico; Karen in Washington; Carrie in Missouri; Heather in Michigan; Laura in Mississippi; Brooke in Florida; Bella in Virginia; Catherine in Florida. Note: due to the volume of entries, I added another seven third prizes. International entries were eligible, but I only received a couple of them this time.

Top suggestions for the location of the Wolf pack in Blessed (Candlewick, TBA), in order of popularity, included Massachusetts, New York state, Washington State, Texas, and the Great Lakes region. Note: all feedback is being taken under advisement. Thanks so much for the thoughtful suggestions–many of them complete with local history and links to more information. I am officially wowed!

The most popular Eternal tie-in T-shirt design, was Royal Bat with Dracul Crest coming in a close second! Read a Cynsations interview with illustrator Gene Brenek.

Thank you to the following Cynsational readers for blogging the contest: author Tracy Vaughn Zimmer; Taschima at Bloody Bookaholic; Starry Night; Katie’s Bookshelf; The YA Book Reviewer; Gone at MySpace; TBQ’s Personal Book Palace; Heather at MySpace; Anna’s Book Blog; Kitty at MySpace; Shelli at Market My Words; Brooke Reviews; Beth Revis at Writing It Out; Paradoxical: Reading, Writing, and Randomness (who keeps a running contest list); Karen Kincy at Confessions of a Wordaholic: pookas & fox-spirits & werewolves, oh my; Mary Ann at Haunting the Broken Tree and Under a Broken Tree with Ghost Girl; Carrie’s YA Bookshelf; Tales of a Ravenous Reader; Liz Garton Scanlon at Liz In Ink; writereader/Shelly Burns; smallish bear at MySpace; The Not So Closet Geeks AKA Not So CG: soakin’ up the limelight!

Note: folks who blogged the giveaway were entered twice. If I missed your link, my apologies! There were a lot of entries! Just let me know, and I’ll highlight it next time!

Another Chance to Win

Enter to Win One of Five Copies of Eternal (Candlewick, 2009) from Young Adult (& Kids) Book Central. Here’s the giveaway question: “If you had a guardian angel (and maybe you do!), what would his or her name be, and what would they be like?” Contest begins Feb. 1 and ends Feb. 28. See additional details. Note: Thanks to Candlewick Press and Young Adult (& Kids) Book Central!

Eternal is the “Soup of the Day” at jama rattigan’s alphabet soup. Peek: “Set in Texas and Chicago, the fast paced narrative about the forces of good vs. evil is populated not only with vampires and angels, but werebeasts and shapeshifters, and of course, it is liberally spiced with glamor, smoldering passion, and Smith’s diabolical wit.” Note: you must surf over to check out today’s celebration soup, served in its own coffin!

Kirkus Reviews says of Eternal, “The pace of this entertaining romp is quick and the action plentiful.”

Thanks to the YA Authors Cafe for highlighting Eternal as their “Love Bites” featured title! Surf over the cafe and add more related reading recommendations!

Thanks to Mark G. Mitchell at How to Be a Children’s Book Illustrator for blogging the Eternal Grand Prize Giveaway with an emphasis on Gene Brenek’s amazing tie-in logos and designs! Read Cynsations interviews with Mark and Gene.

More personally, I’ve heard that online pre-orders have been high, and I hugely appreciate that! Thanks so much! At the same time, I’d like to remind everyone of the importance of supporting brick-and-mortar bookstores and public libraries, especially in challenging economic times. Note: if the book you want isn’t on the shelves, ask if it can be ordered or requested through inter-library loan.

The Eternal trailer below is shown with code from MySpace, which looks much better than the YouTube version. Read a Cynsational interview with Shayne Leighton about the making of the trailer and her latest film, “The Incubus.”