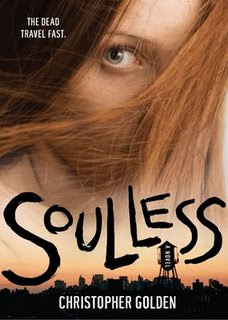 Christopher Golden on Christopher Golden: “I sold my first book–a non-fiction pop-culture project called Cut!: Horror Writers on Horror Film (Berkley, 1992) in 1990 or 1991–and it won the Bram Stoker Award in 1992.

“’92 was also the year I sold my first novel, at the age of 25, and that was it. I quit a fantastic job at Billboard magazine in New York, moved back to Massachusetts with my wife, and have been writing full time ever since.

“In that time, I’ve written adult, YA, and children’s fiction in the mystery, horror, thriller, and fantasy genres, as well as more non-fiction pop-culture books, video games, loads of comic books, an online animated series called Ghosts of Albion (which I co-created and co-wrote with Amber Benson) and the script for the movie adaptation of Baltimore, or, The Steadfast Tin Soldier and the Vampire (Bantam Spectra, 2007), a novel I wrote with Mike Mignola.

“There are several other film projects in development based on my work, but Baltimore is the only one I’ve scripted. My recent books include Poison Ink (Delacorte, 2008) and Soulless (MTV Books, 2008), both for teens, Mind the Gap (Bantam Spectra, 2008), which is a collaboration with Tim Lebbon, the afore-mentioned Baltimore, and The Lost Ones (Bantam Spectra, 2008), the final book in my Veil Trilogy. I’m currently working on a big fat supernatural thriller called The Ocean Dark (Bantam Spectra, 2009).

“My original novels have been published in fourteen languages around the world.”

The first time it happened, it was almost by accident. My agent suggested I give it a try, and though those two books (in the mid ’90s) were pretty formulaic, I found that I really enjoyed writing for teens. I’ve always had an excellent memory for my own junior high, high school, and college years, and I remember what it was like to be 13 or 15 or 19 very well.

Kids and teens are so much smarter and wiser than they’re often given credit for, and writing for that audience is a way for me to both communicate with younger people and to let them know that I don’t feel that way, that they have my respect.

There are days I wish I could trade places with them, to experience the vitality and intensity of being that age. But I wouldn’t want to trade places for long, (he said with a smile).

I was very fortunate, actually. I’d written a handful of short stories and not had much luck with them. In 1989, I attended my first real writers’ convention, and I met a lot of writers, editors, agents, and artists. A great community of people who were making their living doing what I wanted to be doing.

At that convention, I met the woman who would be my agent for the next twelve years, and the woman who would buy both my first non-fiction book and my first novel (and many more after that). In 1992, my agent sent the editor, Ginjer Buchanan, the first 125 pages of the novel I was working on–which I had started in college in 1988–and on the strength of that material, Ginjer offered me a two-book deal at Berkley. That book, Of Saints and Shadows (Ace, 1994), was the first novel I had ever even attempted to write. I quit my job and never looked back.

I took many, many semesters of creative writing courses during college, and though they were very supportive, neither my professors nor my classmates ever really understood the appeal to me of horror and fantasy. I was the weird one.

I think that helped a great deal, in that I had to focus on the story first, rather than on genre trappings, because they were interested in story and character. They didn’t mind if the setting was bizarre or the events gruesome, as long as the story worked.

Credit is due to my former agent, Lori Perkins, who told me–not long after I graduated–that I’d been in school too long. She had me pick up a book on writing fiction and made me study Strunk & White’s The Elements of Style, which I think is vital to good writing.

A huge amount of credit is also due to the wonderful editors I’ve had over the years, most especially Anne Groell, my editor at Bantam, and Lisa Clancy, with whom I worked at Pocket for years. They, and other great editors, have taught me so much simply by doing their jobs.

A writer has to be willing to absorb those lessons. As for what I would have done differently…that’s an impossible question. I would have liked to have worked less, but circumstances and the urgency of ideas propel me forward.

I don’t think there’s anything I wish I had done differently, but there are probably a few things I wish I could have done differently. Still, I can’t complain. Such musings are counterproductive. You learn the lessons and hope to apply them as you go forward.

Could you please update us on your recent back YA list, highlighting as you see fit?

After Lisa Clancy’s departure, Sniegoski and I did a younger-skewing quartet of books called Outcast (2004-2005), which are being developed for film by Universal.

My friend Ford Lytle Gilmore and I did a four book series for Razorbill called The Hollow (2005-2006). They didn’t perform very well in stores, which I chalk up to the totally lame, boring covers on the books.

Two great things came out of that experience, however. I got to work with a very talented editor named Liesa Abrams, who has since moved on to Aladdin, and The Hollow is currently in development as a TV series by Lionsgate, a project that is looking extremely promising at the moment.

Most recently, as I mentioned, Delacorte published my supernatural YA thriller Poison Ink. In October, MTV Books is putting out my novel Soulless. It’s extremely grim, but the whole idea when discussing it with the publisher to begin with was the push the envelope a little both in terms of content and commentary.

Congratulations on the publication of Soulless (MTV Books, 2008)! Could you tell us a bit about the book?

In Soulless, seven very different teenagers try to survive as zombies overrun the Northeast U.S., converging on New York City when they realize that the rising of the dead has its origins there…and that they may have to commit murder themselves if they want to stop it.

The novel is about mediums, spiritual beliefs, who we love, what we’re willing to do to save them, and the way the world changed after 9/11. The current generation of young teens are the first to live in a world where they cannot remember what things were like before 9/11.

I think that’s changed the world, but I also think that as they get older, it will change society. Once upon a time, something like 9/11 was unimaginable. So was the negligence of the U.S. government after Hurricane Katrina. But to today’s teens, these things are not at all unimaginable.

In fact, I believe that they live with the expectation that if something isn’t done, worse things are inevitable. And that’s a good thing. It gives them the first tools they’ll need to begin building a society that will be better equipped to prevent such things from happening.

I enjoy zombie stories and movies–some of them–but one of the things that always bothers me is the convenience of the mechanism. A comet goes by…boom, there are zombies.

These kinds of stories very frequently have no third act. The characters are introduced, they are put in terrible circumstances, and their circumstances worsen. The end.

I wanted a zombie story with a third act.

First, I didn’t want it to be like every other zombie story. There are a lot of them out there, these days, and my intentions were slightly different.

Second, I had to remain constantly aware of just how far I could push not only the level of gruesomeness, but the darkness of the piece. By its very nature, it has to be dark.

It isn’t just about the dead rising, but the dead rising with a purpose. They want to find the loved ones they’ve left behind, but all the good has gone out of them, the kindness. They’re soulless.

What would happen if you took away all of the good qualities in a person, and left only their worst traits and instincts. They would say and do horrible things. Add to that the hunger of the undead…it’s very grim.

Interestingly enough, my editor first asked me to make the book more gruesome…but once I had done that, in her final edit, she scaled back some of the very things she asked me to put in, realizing, I think, that they weren’t necessary.

The situation is horrible enough without going too far overboard on the gore (though there’s plenty of that). I had to be in a dark place to make the story work, but it’s much more interesting to me than stories that are just about the visceral horror alone.

What is at the heart of the appeal of (or at least fascination with) zombies?

An excellent question. I don’t know the answer. In fact, I’m working on a project right now that explores that very question, but I can’t say more about it right now.

That’s an easier one. People want mediums to be real.

If mediums are genuine, if at least some of them are not charlatans, then that means that: (A) there is life after death, and we would no longer need to rely on faith to believe that death is not the end for us; and (B) the people we’ve loved who have died are close at hand, and if we miss them powerfully enough, we might be able to speak to them, to take comfort in that contact.

Like many people, I don’t believe in mediums, but I desperately want to.

What advice do you have for beginning writers of speculative fiction?

Don’t be afraid to make up new rules for how familiar ideas should be executed.

If you do one thing well, don’t be afraid to try something else.

Read everything that interests you, and some things that don’t.

Write as often as you can.

Meet other writers, artists, agents, become a part of the community. Writing is a solitary life, but it helps when you have contact with other people who share your passions.

Shut up and write.

What do you do outside of the world of writing and publishing?

Spend time with my wife of 17 years and our three kids, read, and watch far too much television. 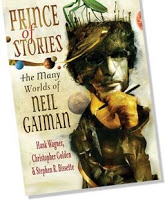 Soulless is out in October, along with Prince of Stories: The Many Worlds of Neil Gaiman (St. Martin’s, 2008), which I co-wrote with Hank Wagner and Stephen R. Bissette.

In early 2009, you can look for The Map of Moments (Bantam Spectra), my second collaboration with Tim Lebbon. Watch for more news at www.christophergolden.com.