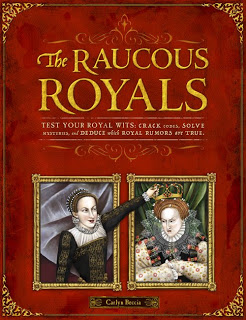 Congratulations on the release of The Raucous Royals: Test Your Royal Wits: Crack Codes, Solve Mysteries, and Deduce which Royal Rumors are True. (Houghton Mifflin, Oct. 2008)! Could you tell us about the book?

The Raucous Royals (you must say it with a British accent) reveals the rumors behind history’s most scandalous royals. Examples: Was Napoleon really short? Did Anne Boleyn have six fingers? Did Richard III murder the princes in the Tower? Did Mary Queen of Scots plot to assassinate Elizabeth I? and much more.

With each rumor, clues and codes are given, but in many examples whether a rumor is true or false is left to the reader to decide.

I am sure teachers are just going to love this book because its message is basically, “don’t believe everything you read or are taught.”

What is it about those royals that’s so fascinating? What fascinates you in particular?

I find it fascinating that there is so much debate surrounding the scandals and rumors. In particular, I find it interesting to trace the origin of a rumor. Between word of mouth, pamphlets, caricatures, paintings, jingles, and historians, there are so many factors that shape how a person is remembered.

Napoleon, the master of spin, said it best: “history is the version of past events that people have decided to agree upon.”

What inspired you to translate that interest into picture book form?

When you start to play history detective, you find that each royal is viewed so differently by historians. I wanted to get readers involved in the debate and have them rethink how they view history. I think history gets really boring when it is taught as a static subject, but if you show how it constantly changes, and how stories are formed and evolve over time, then it becomes much more interactive.

I started conducting research for the book in 2005, but I didn’t get the courage to submit it to my editor until the following year. I kept worrying about how little interest there is in European history and that I would never find a market for the book.

In 2005, I was on my honeymoon in Italy when I saw an exhibit on how Marie de Medici influenced art. It made me think how art was influential in shaping how we view rulers. I started to think how other mediums changed our view of history. This really motivated me to complete the research and send in the submission to my editor.

What were the challenges–research, literary, psychological, and logistical–of bringing the book to life?

The biggest challenge was to take such a broad subject and whittle it down to the juiciest bits. There are 13 raucous royals covered. That’s a lot of research.

I did a good part of my research in London visiting the National Portrait Gallery, Tower of London and the British Library. For my French royals, I went to Paris and visited Versailles, the Louvre and Musée d’Orsay. I tried to find as many sources as possible because some of the rumors are unresolved.

Another challenge was remaining objective when some rumors are still so hotly debated by historians. For example, history is still undecided on whether Richard III killed his nephews. And Mary Queen of Scots always gets people deeply divided on whether she was a conniver or an unfortunate victim.

This book is a great example of lively, creative non-fiction! Did you use any other titles as models?

I actually did not have what you would call a “great literary work” for inspiration.

Instead, I used tabloid magazines like People as models. I am a People magazine fanatic. I can’t help but be interested in who is wrecking their life, who is making a comeback, and who is having yet another baby.

Although it is not the prettiest format, I think the busy, loud tabloid magazine layout appeals to kids (If you have ever looked at a typical MySpace page, then you will understand what I mean).

And teens in general are far more familiar with Britney Spear‘s antics then they ever will be with rulers that changed history.

I kept thinking if I could harness a tabloid magazine’s gossipy playfulness and put it into a history book, then it might be slightly less painful for readers.

I think it is important to look at other media like television and how kids use the Internet for inspiration as well.

For art inspiration, I looked to caricaturists like James Gillray. These political cartoons told stories with so much subtle depth and meaning. And, of course, they always captured the humor behind a ruler’s follies.

The book has a sort of multi-media feel, with various art elements working together (and sometimes whispering from the curtains, so to speak). How did this aspect evolve?

I have always loved activity books because they involve the reader in the learning process. I also find it intriguing when TV shows like “Entertainment Tonight” will state a rumor, but then they won’t give the answer until after the commercial break.

I am always on the edge of my seat screaming, “Tell me if Britney is going to lose her kids!”

So I thought to myself, what if I used the same technique to get kids to turn the page? By using art clues, codes, gossip, and most importantly–not giving the answer up front, it involves the reader in the process of tracing a rumor.

What were the other artistic challenges and opportunities?

One of the biggest artistic challenges was how to portray the royals. Should they resemble their official portrait, or should I depict them based on contemporary descriptions?

In the end, I decided to be less literal and more satirical in their portrayals.

The Raucus Royals strikes me as one of those picture books that can readily reach to the YA audience and beyond. How do you imagine the audience?

I think there is something magical about royalty that appeals to kids of all ages. We don’t like to point out the pitfalls of our presidents as much as we do with royalty. Maybe it’s because Americans have never had kings or queens. We have Hollywood, but it’s a poor substitute.

Unfortunately, teachers often don’t have the time and resources to cover European history. And with the explosion of historical fiction, inquisitive readers of all ages want to know the truth behind the drama.

Many adults (like me) grew up believing the rumors in The Raucous Royals. Ultimately, I am hoping the book will appeal to adults because it challenges what we already know and to kids because it introduces some colorful characters that they may never get exposed to in their regular curriculum.

Readers can visit a site dedicated to the book. What will they find there? How does it enhance the reading experience?

The purpose of the book is to get readers asking more questions and doing their own research. The site works as a tool to get them pointed in the right direction.

RaucousRoyals.com includes family trees, a glossary, art clues, games and tons of recommended books to get more in depth information about each royal ruler. My theory has always been that a good book gets kids to pick up another.

The site is constantly evolving and definitely has been a labor of love. It also features the Raucous Royals Blog which features a new scandal or rumor each week (sometimes every other week when I get busy).

What advice do you have for writers researching historical non-fiction? For illustrators?

I always hear “write what you know.” That may work for fiction, but I would actually give the opposite advice for historical nonfiction–write what you have no clue about, but would like to learn. When we know a subject too well, it is often hard to relate to the reader learning it for the first time.

For illustrators of historical non-fiction, I think it is important to put yourself back in the place and time when the person lived. Most illustrators already do this, but sometimes it is tempting to just use the Internet for photo research. On-site research really brings your characters to life.

How about those writing creative non-fiction for young readers? And again, for illustrators?

I think writers of creative nonfiction sometimes get caught up worrying about whether a subject has been done before. Even if a subject has never been done, that never ensures success.

I would advise to not focus on the subject, but instead on how you can take a fresh approach to that subject. The same applies for illustrators.

We last spoke in September 2007 about Who Put the B in Ballyhoo? (Houghton Mifflin, 2007). Do you have any recent news about that book to share?

Yes! Who Put the B in the Ballyhoo was recognized as the 2007 Golden Kite Honor Book for Illustration.

My next book is called I Feel Better with a Frog in my Throat (title pending), which will be released in 2010 by Houghton Mifflin.

The book features the most bizarre and grossest cures doctors have used throughout history for common kid ailments like bumps, bruises, headaches, coughs, colds and sore throats.

It will contain tons of gory illustrations of leeches, maggots, ground up mummies, and occasional frog slime.

I have become a bit of a hypochondriac while researching it, but my stomach is much stronger now!