Cambria Evans was born in Richmond, Virginia; and grew up in Provo, Utah. She studied graphic design at Rhode Island School of Design, and now works as a freelance illustrator, writer and designer in Brooklyn, New York. Cambria loves all things Halloween and celebrates every day by eating plenty of candy. She shares a studio with her husband Kari Christensen, who is also an illustrator.

How did you train as a writer? As an artist?

My formal education was in art and design. As the oldest girl of 29 cousins, I was informally trained as storyteller.

I was constantly making up and telling stories so the swarm of younger cousins would be somewhat still and quiet.

Could you update us on your backlist, highlighting as you see fit? 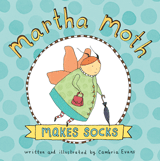 Congratulations on the release of Bone Soup (Houghton Mifflin, 2008)! Could you fill us in on the story?

Bone Soup is about Finnigin, a skeleton with a reputation for eating. When he comes to a town, everyone has hidden their food and locked their doors.

After the initial rejection, Finnigin comes up with a plan, lures the townscreatures with a song, and then tricks them into adding their favorite ingredients to his soup.

The whole town ends up with a wonderful feast of bone soup, wormy cheese, and bread.

I was in an outdoor market in Cuzco, Peru; when I saw a crazy looking stew with bones sticking out. I called my husband over, saying “Come look at this bone soup!” and immediately I thought, “what a great idea for a book.”

When I got back home, I checked the Library of Congress to see if anyone had already written it, and to my surprise no one had. So, I wrote the first draft of the manuscript that very day.

January-February 2006: wrote story in one day, and edited for the rest of the month;

March 2006: story and concept sketches were sent to and accepted by Houghton Mifflin;

April 2007: While freelancing at Martha Stewart I hurt my arm and was unable to hold a pen for five months.It was horrible not being able to work, and I didn’t think I could meet the deadline for publication.

September- October 2007 After much physical therapy and rest, I was able to work. For a month straight I literally worked day and night to get the final paintings done in time.

The biggest challenge was making my line weight consistent throughout the book. I started using a very small Japanese pen.

Half way through the finishes, I ran out of ink, and the pens were completely sold out in America. There was a week I tried 18 different pens and none of them worked.

Luckily, after much searching, I found a tiny store in New York that had three pens left!

I especially appreciated the culinary aspects of Bone Soup! Where did you get your ideas for ingredients?

I absolutely love food and travel shows. I remember seeing a “Globe Trekker” with a Cambodian bat soup that has haunted me, hence the bat wings as ingredients. But for most of the ingredients I just thought of things that gross me out, and would therefore appeal to creatures and ghouls.

According to conventional wisdom, if you put food in a children’s book, someone will serve it to you. So, I’m wondering: have you eaten any bone soup?

Thankfully, no. Although I have eaten traditional bone soup that is made from a ham bone and vegetables.

2. Get in the habit of writing every day and writing for pleasure instead of just for a deadline.

How about if you were talking to your beginning-illustrator self?

1. Develop multiple ideas around a concept instead of getting stuck in one direction, because sometimes a better character or idea is created by combining the best bits of different things.

I am a freelance graphic designer, product designer and illustrator. I also co-run a social stationary and accessories company called J.Bartyn Design + Manufacturing.

How do you balance your life as a writer with the responsibilities (speaking, promotion, etc.) of being an author-illustrator?

I haven’t found that balance yet. The great thing about freelancing is I can work from anywhere, so I can do a book reading somewhere and still get work done for my design clients.

But that is also the bad part of freelancing. No mater where I go, or what day of the week it is, I am always working on something.

I’m writing a few stories right now, but nothing has been sent off to publishers yet.

This fall, products (such as coloring books, cards, gift bags, and wrapping paper) with my illustrations will be available at Indigo Books and Music Inc.‘s eco-friendly retailer, Pistachio.

One thought on “Author-Illustrator Interview: Cambria Evans on Bone Soup”