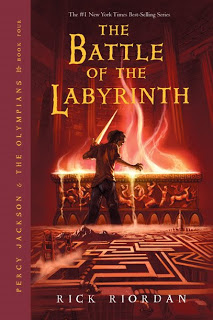 You last spoke with Cynsations about The Lightning Thief (Percy Jackson and the Olympians)(Hyperion, 2005) in December 2005. Could you update us on what’s new in your writing life since?

So much has happened in three years, it’s hard to believe. The fourth Percy Jackson book, Battle of the Labyrinth, will be out May 6. The response from kids, parents, and teachers has just been overwhelming. Interest in the series really started to snowball in the last year or so.

The biggest change in my writing life has been the increased demands on my time. It’s always been a balancing act between family, writing, and touring, but in the last few years, it’s definitely gotten trickier.

Fortunately, I love what I do! Right now I’m working on the fifth Percy Jackson book, along with an adult mystery novel, and planning for a fantasy/adventure that I’ll publish with Disney in 2010. 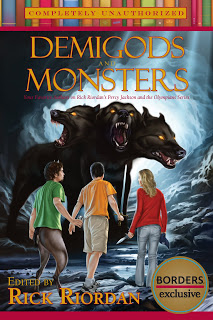 Congratulations on the release of Demigods and Monsters: Your Favorite Authors on Rick Riordan’s Percy Jackson and the Olympians Series (BenBella, May 2008)! Could you tell us about the book?

It’s a collection of essays by a variety of authors about themes and characters in the Percy Jackson series. It never would’ve occurred to me to do a book like this, but I was very impressed when I saw the essays!

How did the project evolve, and how did you come to be involved in it?

BenBella puts out a series of these anthologies which they distribute with Borders.

They have collections about everything from Stephenie Meyer (author interview)(A New Dawn: Your Favorite Authors on Stephenie Meyer’s Twilight Series edited by Ellen Hopkins) and Narnia (Through the Wardrobe: Your Favorite Authors on C. S. Lewis’s Chronicles of Narnia edited by Herbie Brennan (author interview) to Veronica Mars and the Gilmore Girls.

Leah Wilson from BenBella contacted me about possibly editing the Percy Jackson volume, Monsters and Demigods, and I was curious to see what the different writers were saying, so I agreed.

What attracted you to the idea?

I was a little hesitant at first. I didn’t know if people would want to read it. I’m also wary of over-analyzing books that are meant for pleasure–which is probably something I picked up in my days as an English major! However, I was flattered that anyone would want to write an essay about my books, and I wondered what these other authors would say. Writing a forward for the book also gave me a chance to reflect on my own writing path, which is something I don’t often have the luxury to do.

Could you give us a hint of what to expect from the various contributors?

I was very impressed by the range of ideas, and the entertaining way those ideas are presented. The book is anything but dry. The essays cover so many topics — what makes a good parent, what the Oracle’s prophecies mean, why so many monsters seem to go into the retail business.

Many of the essays made me stop and wonder: “Wow, is that what I was doing?” It was like someone showing me an x-ray of my own head.

What were the challenges, from an anthologist’s point of view?

For me, the biggest challenge was maintaining distance, since I wrote the series the essayists were analyzing. It took a while to get used to that.

But honestly, the essays were so insightful, and most of them gave me much more credit for being clever than I deserved. How could I complain?

The variety. It’s amazing how a dozen authors can look at the same series and find a dozen different angles to talk about–all of them unique and thought-provoking.

Was it in any way surprising or uncomfortable or particularly marvelous to read essays (by other authors) that were inspired by your work?

When I write, I’m just telling a story. If there is symbolism in the books, it happens subconsciously, the way a native speaker might use subject-verb agreement without ever consciously thinking about it. To have someone else hold up a mirror to your work is pretty amazing, and yes, a little uncomfortable!

It would be hard to single out one essay, since they are all so great, but I definitely related to the discussion about what makes a good parent. I see this from both sides — as a parent myself, and from Percy Jackson’s perspective, as my teen narrator.

I hope it will enrich their reading of the Percy Jackson series and encourage readers to come up with their own interpretations.

The author creates the book, but what the book means –that’s a long discussion, and the author is not the sole authoritative voice.

Percy Jackson and the Olympians will wrap up in book five, spring 2009, but it won’t be the end for Camp Half-Blood. I’ll be returning to Percy’s world for a new series with demigods and Olympians in 2011. More on that later!

I’ll also have a new fantasy coming out from Disney in 2010, as I mentioned, and a mystery adventure The Maze of Bones, which launches the series 39 Clues, will be out from Scholastic this September.