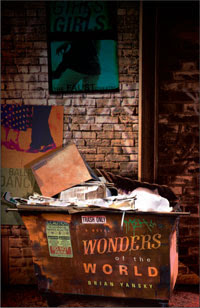 Wonders of the World by Brian Yansky (Flux, 2007)(excerpt). From the promotional copy:

“‘I have been everywhere. Everywhere it is the same. All that really exists is the savage truth. Kill. Be killed. Live. Die. There’s nothing more.’

“So says Bluebeard, king of the streets, purveyor of drugs, women, and pornography. This isn’t the world Eric imagined. At seventeen, he runs away to discover the wonders of the world—the wonders his storyteller father told him about throughout his childhood. But all Eric finds on the street in Riverton is gangs, junkies, sex, and ruined lives. He also stumbles onto a gift for acting and discovers an imagined world might just be his ticket out of a broken real one—if he can say no to the devil.

“Brian Yansky expertly conjures a gritty and original portrait of life at street level, complete with cynical adults, doomed teens, a villain who isn’t quite human, and a brilliant but unlikely hero.”

Ages 14-up. Read a Cynsations interview with Brian.

An autographed copy of Wonders of the World will be given away to a YA public librarian! To enter, email me with your name and address by 4 p.m. CST Monday, Feb. 4! Please also type “Wonders of the World” in the subject line. Good luck! 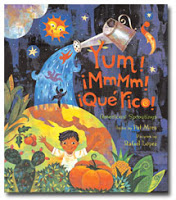 Favorite Poetry Books of 2007 from Sylvia Vardell at Poetry for Children. Read a Cynsations interview with Sylvia.

Congratulations to Shana Burg on the launch of her official author site. Shana is the debut author of A Thousand Never Evers (Delacorte, 2008)(Listening Library, 2008). Read chapter one. Shana is based in Austin, Texas.

Congratulations to Tiffany Trent on the release of By Venom’s Sweet Sting (Hallowmere Book 2)(Mirrorstone, 2007)! From the promotional copy: “Are Corrine and her friends strong enough to take on the Fey? Following the destruction of Falston, Corrine and her schoolmates embark for Scotland to chase Rory and the stolen rathstone. On the moors of Kenmore, tensions mount between the friends as a new love interest comes into Corrine’s life. In the layers of lies and secrets, who can she trust? In this exciting sequel to In the Serpent’s Coils, Tiffany Trent delivers a larger-then-life battle between the Fey that readers will never forget.” Visit Tiffany at MySpace, read her LJ, and learn more about Hallowmere. Read a Cynsations interview with Tiffany.

Dorian Cirrone: new official site from the author of the Lindy Blues mysteries (Marshall Cavendish, 2006), Dancing In Red Shoes Will Kill You (HarperCollins, 2005)(excerpt), and Prom Kings and Drama Queens (HarperTeens, 2008)(excerpt). Read a Cynsations interview with Dorian. Note: Dorian’s site is designed by Lisa Firke of Hit Those Keys, who also designed my own official site. 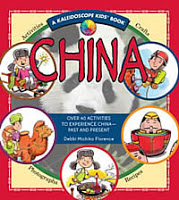 Debbi has been offering author interviews at her site since 2001. Don’t miss her latest with Eric Luper. Here’s a sneak peek: “Feisty and fine. I pored over those words for hours. Then, there were a bunch of numbers after that, splits and percentages and advances and all that. That’s when I realized that, although my writing might be fine and feisty, my knowledge of the publishing industry was weak and wanting.”