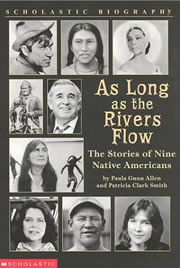 AS LONG AS THE RIVERS FLOW: THE STORIES OF NINE NATIVE AMERICANS by Paula Gunn Allen (Laguna Pueblo/Sioux) and Patricia Clark Smith (Micmac)(Scholastic, 1996). Brief but well-done biographies of Weetamoo, Geronimo, Will Rogers, Jim Thorpe, Maria Tallchief, Senator Ben Nighthorse Campbell, Wilma Pearl Mankiller, Michael Naranjo, and Louise Erdrich. Notable both for the quality of the writing and presentation of information as well as the diversity of figures, past and present, male and female, and the variety of their pursuits. Ages 10-up. 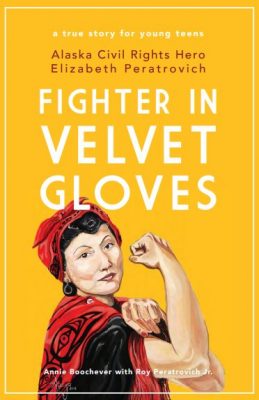 FIGHTER IN VELVET GLOVES: ALASKA CIVIL RIGHTS HERO ELIZABETH PERATROVICH by Annie Boochever and Roy Peratrovich, Jr. (Tlingit) (University of Alaska Press, 2019).  In 1945, when Elizabeth was 34 years old, she gave a powerful speech before a packed session of the Alaska Territorial Legislature. Her testimony about the evils of racism crowned years of work by Alaska Native People and their allies and led to passage of Alaska’s landmark Anti-Discrimination Act, nearly two decades before the US Civil Rights Act of 1964. Ages 12-up. More on this title from Cynsations. 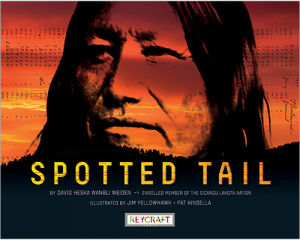 SPOTTED TAIL by David Heska Wanbli Weiden (Sicangu Lakota) illustrated by Jim Yellowhawk (Cheyenne River Sioux/Onodoa/Iroquois) & Pat Kinsella (Reycraft, 2019).  Traces the life of the famous Lakota leader who expertly guided his people through a pivotal and tumultuous time in their nation’s history as they fought and then negotiated with the U.S. government. Features unique illustrations combining photography with modern ledger art, a Native artistic style using ledger paper from accounting books as canvas. Ages 9-up. More on this title from Cynsations.