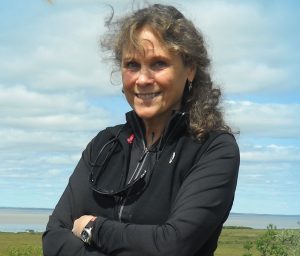 Rarely do we see biographies of Native people post-1900, so the biography of Elizabeth Peratrovich, Fighter in Velvet Gloves (University of Alaska Press, 2019), by Annie Boochever with Roy Peratrovich, Jr. (Tlingit) is a welcome addition in children’s literature.

The book recently represented the state of Alaska at the National Book Festival in Washington, D.C. this summer.

Annie, what was your initial inspiration for writing about the Alaska civil rights hero Elizabeth Peratrovich?

For those readers who aren’t familiar with her, Elizabeth Peratrovich played a key role in the passage of Alaska’s landmark Anti-Discrimination Act on Feb. 16, 1945, nearly 20 years before President Lyndon Johnson signed the U.S. Civil Rights Act of 1964.

She is especially famous for her stirring testimony before an all-white-male Territorial Senate, but she also worked ceaselessly to build support for the bill and for other Alaska Native issues.

As a teacher in Juneau, Alaska, the place where I was born and grew up and where Elizabeth lived and worked much of her life, I was always frustrated, as were my colleagues, at the lack of books and student resources about her. More than that, I remember seeing racism against Alaska Natives as a child and young adult, and it affected me deeply.

After the publication of my first book, Bristol Bay Summer, in 2014, many teachers and librarians encouraged me to write about Elizabeth Peratrovich. However, in spite of my interest, and even though our families had been acquainted with each other while I was growing up, I did not feel it would be appropriate for me, as a non-Native, to write such a book alone.

Oddly enough, the unveiling of a new bridge in Juneau provided the catalyst. My niece was working at the Alaska Department of Transportation and Public Facilities in Juneau and was in touch with Elizabeth’s only living child, Roy Peratrovich Jr., because he had been the designer of the previous bridge, aptly named the Brotherhood Bridge to encourage good relations between Alaska Native people and non-Natives.

Roy Jr. was the first Alaska Native to be certified as a civil engineer in Alaska. He was also a talented artist who had made a series of decorative copper medallions that graced the railings on the sidewalks flanking the former bridge. They bore images of Eagle and Raven, the two moieties of Southeast Alaska Native people. My niece worked with Roy Jr. to transfer the medallions to the new bridge and invited him to the grand opening.

I wrote to Roy Jr. and told him of my interest in writing a book about his mother and was thrilled to learn he was excited to work with me. Countless documents, letters, photographs, telephone and email conversations later, Fighter in Velvet Gloves was born.

I would like to recommend two resources to be used as a companion to Fighter in Velvet Gloves: the 2008 PBS documentary film, For the Rights of All: Ending Jim Crow in Alaska and the novel My Name is Not Easy, a 2011 National Book Award Finalist for Young People’s Literature, by Debby Dahl Edwardson (Marshall Cavendish, 2011).

Unfortunately, just about every person who knew Elizabeth personally was deceased. Roy Jr.’s recollections about his mother were invaluable, but were, of course, the memories of a child during most of her lifetime. Surprisingly though, as my research progressed, I was stunned at how many people associated with Alaska’s landmark civil rights legislation were either friends or neighbors of my family. Juneau’s population in the 1950s was only around 10,000, so people tended to know each other.

In addition to being a great ally of the Alaska Native people, Governor Gruening was a much-admired friend of my dad. I have fond memories of family dinners with the Governor and his wife Dorothy. In spite of all that, I worried the whole time that although I was a native Alaskan, I was not an Alaskan Native.

Roy Jr. was wonderful about easing those worries. The University of Alaska Press was also helpful by arranging for an early draft to be read by several people with backgrounds in Alaska Native legal history. Their comments helped me place Elizabeth’s story in the context of the larger Alaska Native struggle.

By the time I had finished writing the book, it was as if all the ghosts of Elizabeth’s generation were my friends! It was a very personal experience.

Share with us your process of working with Roy Peratrovich, Jr., Elizabeth’s son, to tell her story.

I peppered Roy Jr. with all sorts of questions about his mother and growing up in Juneau. He was always patient and generous with his answers. He provided many documents, but just as important, he read and edited each revision of his mother’s story. Although he was 84 by the time the manuscript was done, and suffering from medical challenges, his mind was, and is, perfect. I could never have written the book without him.

What is your relationship to the children’s-YA writing and illustration community? What other works do you have out in the world?

I am still very connected to many of the families and students I worked with during my teaching career in Juneau. I am a member of the SCBWI and, before moving, participated in monthly meetings in Juneau. I also worked with a children’s literature committee to vet new children’s books for the Juneau library.

I recently moved to Bellingham, Washington and have since become a member of the Western Washington Chapter of the SCBWI. Both of my books have been selected for the Alaska Battle of the Books reading motivation program.

I earned my MFA in creative writing for children and young adults while I was still teaching, and Bristol Bay Summer began as my thesis. After many iterations, Bristol Bay Summer was published by Alaska Northwest Books, recently rebranded as West Margin Press.

The Alaska adventure story starring 12 going-on-13 Zoey Morley is based on my experiences as a single mother with two small children and a bush-pilot boyfriend. As in real-life, Patrick flew fish in a Cessna 185 plane to the processors in Dillingham for a family who had a set-net site in a remote corner of Bristol Bay in 1980.

In addition to being a Battle book, Bristol Bay Summer won a Literary Classic’s International children’s literature award for Best First Novel. It is still being read in middle school classrooms not only as a novel but as a resource to better understand the setting of the ongoing controversy in Bristol Bay over the Pebble Mine.

What will we see next from you? 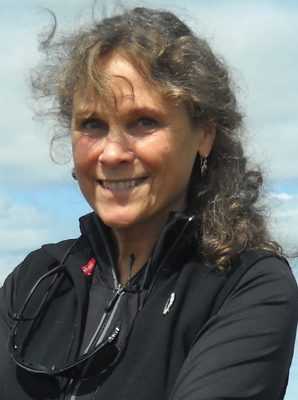 Annie Boochever grew up in Juneau in the days when Alaska was still a territory. Racism had become subtler than in Elizabeth Peratrovich’s time, but it was still pervasive. Even as a child, Annie was painfully aware of it.

She later worked as an educator in Alaska and in Newtown, Connecticut, where she was named Weller Foundation Teacher of the Year.

He co-founded the engineering firm Peratrovich, Nottingham, and Drage. He is a successful artist and author of the book Little Whale: A Story of the Last Tlingit War Canoe (University of Alaska Press, 2016).

The U.S. Mint recently announced a $1 coin featuring Elizabeth Peratrovich to be introduced in 2020.  Peek: “The design features a portrait of Elizabeth Peratrovich, whose advocacy was considered a deciding factor in the passage of the 1945 Anti-Discrimination Law in the Alaskan Territorial Government. The foreground features a symbol of the Tlingit Raven moiety, of which she was a member.” 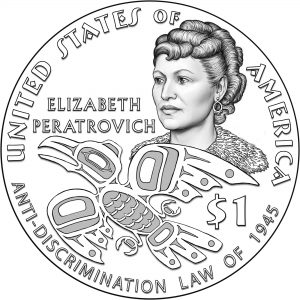 See a news video including unveiling of the coin design. 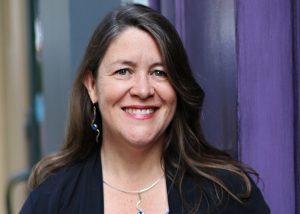 Her newest works include: At the Mountain’s Base, illustrated by Weshoyot Alvitre (Kokila, 2019); Indian No More, a historical fiction middle grade novel co-authored with the late Charlene Willing McManis (Tu Books, 2019); and “College Degree,” which appears in Thanku: Poems of Gratitude, edited by Miranda Paul and illustrated by Marlena Myles (Millbrook, 2019).