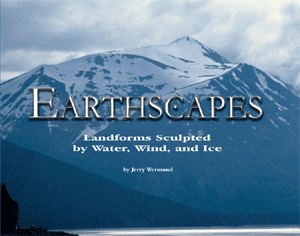 EARTHSCAPES: LANDFORMS SCULPTED BY WATER, WIND AND ICE by Jerry Wermund (Rockon, 2003). Features poems and color photographs that lead the reader to visit frozen mountains, wander seashores, roam streams and rivers, and venture into parched deserts. This interview was conducted via email in 2003.

Writing geology for children is a quest inspired by several circumstances. I have a passion for geology based on more than thirty years experience as a geologist who had many opportunities for travel.

Kids improved markedly with this attention. However, I was disappointed that their books rarely related to science. The few science books I found and brought delighted them. Their reading skills improved with their willingness to tackle more advance subjects.

During that period, I taped measurements of the relative amounts of science books on the shelves of school libraries and children’s book stores. Science books were a woeful minority. Biological (green) sciences were dominant; physical sciences and mathematics were weaker. Ignoring long shelves of dinosaur books, geology had the poorest representation. Books on earthquakes, volcanoes, and glaciers sometimes appeared as did a few books on rocks and minerals.

Five years ago, I decided to write a book that would introduce children to the varied landforms on the Earth’s surface. I began a 150 page double-spaced manuscript that attempted to identify and explain every landform known to man. It began with the largest forms ‘ mountains and basins. Soon, I was adding every bump and dent and how they formed from the actions of wind, water, ice and earth forces.

The language was heavy, reflecting my difficulty in changing professional geologese into everyday language. I visualized a series of detailed block diagrams to illustrate characteristics and processes of formation. I had created a textbook not the read at home fun book I wanted. So, I laid it to rest.

Next I began writing a picture book about rocks. As I reached to condense the text I experimented with free verse. My critique group, whom I recognize in EARTHSCAPES, encouraged me to pursue the poetry. While creating more than thirty poems about rocks, I sneaked in some on landforms.

I submitted both sets of poems to Texas SCBWI workshops in which major editors critiqued two pages for thirty writers. Both the editors and peers reinforced my home group’s encouragement. I felt positive when elementary school teachers, my peers, argued about what library shelf would hold my work, science or poetry.

However, a problem was clearly stated when one editor who liked my work began her critique ‘ “Poetry does not sell!”

I pursued publication of the rock poetry as a picture book following the prescribed course of submitting text ‘ no illustrations. I received direct rejections stating, “We do not publish poetry.” I also received numerous letters encouraging me to try another house. I felt in those the difficulty of convincing marketers to try this genre. Similar results followed the submission of my landform poetry.

My query letters always included, “There is a market of thousands of geologists who will buy for their children and grandchildren,” I convinced myself of this truth.

I visited a dear friend, Debbie Leland, who has self-published successfully. Her encouragement and advice led me to try this route.

When I looked at my manuscripts which subject would I publish first? I visualized forty-eight page picture books. I had no illustrations for a rock book; it needed an artist. But, I had thousands of colored slides photographed over forty years as a geologist. “I will publish the landform book first.”

Rockon Publishing (www.rockonpub.com) was born. EARTHSCAPES is the result. Using my photographs along with a few borrowed has worked out so well. I have difficulty convincing readers that I wrote all the poems before I matched colored photographs with the writing. But, that’s a truth; cross my heart.