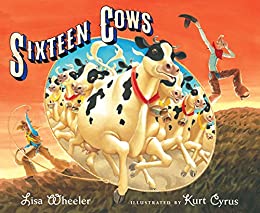 SIXTEEN COWS by Lisa Wheeler, illustrated by Kurt Cyrus (Harcourt, 2002). A first-rate, down-home, heel kickin’ and rockin’ romance between Cowboy Gene and Cowgirl Sue (aided in great measure by their sixteen cows). Refrains of “moo!” guarantee a satisfyin’ read-aloud for storytime crowds and bedtime stories. Ages 4-up. This interview was conducted via email in 2002. Visit Lisa Wheeler.

It was March of 1999 and I was walking on my treadmill, trying to shed unwanted pounds. I had planned a trip to California for August and wanted to lose some weight beforehand. Well, I hate to exercise. I find it boring and monotonous, so when I would do my daily walk, I would cheer myself on by saying, “I’m walking to California!”

One day, I was so bored, I started to think about what I might really see along the way if I were truly walking to California. All of a sudden I got this image in my head of a field of cows—in Texas! (You wouldn’t even take that route from where I live.) Immediately following that vision of the cows, came these words:

Cowboy Gene was long and lean
Hair of red and eyes of green.

I immediately jumped off the treadmill and wrote them down. Then, I jumped back on to see if any more of the story would come.

It was three years between the initial idea and the publication date.

The first excitement was finding out Kurt Cyrus was going to illustrate. I knew from his other books that he drew great cows. But he almost turned the book down. He was tired of cows. The reason he agreed to do it was because of the opportunity to illustrate the tornado. I’m glad there was a storm in my manuscript!

Then, I got to see the thumbnail sketches, and they were terrific, but not as terrific as getting the color proofs. After that, I heard Sixteen Cows had been picked up as a Junior Library Guild selection. That was exciting. And, of course, holding the first copy in my hands. I’ll never get used to that thrill.

I think the most challenging event happened when Kurt Cyrus was working on the thumbnails. I got an email from my editor asking for ‘tweaks’ to the manuscript.

On the surface, they looked simple. Kurt asked if I could eliminate the ‘boasting’ verses that were in the original version. Smack dab in the middle of Gene and Sue’s singing feud, they broke off into this boasting match.

Well, that was one of my favorite parts of the book! I had so much fun writing it, how could I simply dump it? Earlier, I had made a ‘dummy’ of the book to give myself insight into page turns, etc.

I took that dummy out and removed the boasting match, then read it aloud. Sure ‘nuff, Kurt was right. Without it, the book read more smoothly. So I agreed to take it out.

The second request wasn’t as simple. I was asked to change the names of the cows to add more humor when the names were mixed up. But the thing is, there are four separate places in the book where the names have to rhyme:

It wasn’t a simple matter of inserting funnier names. I felt like I was an engineer, trying to hold up a toppling building with a toothpick. In the end, it all worked out, and I am glad Kurt suggested it. The book is much stronger and that is what really counts in the end—the book.