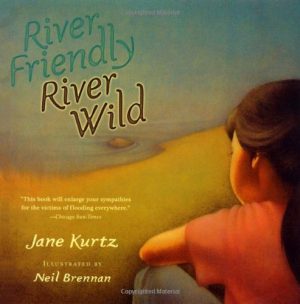 RIVER FRIENDLY, RIVER WILD by Jane Kurtz, illustrated by Neil Brennan (Simon & Schuster, 2000). An exquisitely written and illustrated picture book of poems inspired by Kurtz’s own family’s experience during the flood in Grand Forks. Ages 6-up. This interview was conducted via email in 2000.

I had just been stunned by the Red River flood of 1997 and had seen our (ultimately torn down) house one time when I flew off to speak at IRA in Atlanta. People there kept saying, “You’ll write about it,” but I couldn’t imagine that I would.

My workshop was about writing non-rhyming poetry with kids, and Deborah Hopkinson (children’s author; visit her online), who was also part of the workshop, said, “What if you wrote about the flood in the same way you get kids to write about their lives and experiences?”

When I got back to Grand Forks and dug into the mess, I found that it felt just right to peel off my yellow gloves from time to time and jot down phrases that captured a little of what I was going through.

River Friendly River Wild was a book that poured out of me, and my editor at Simon & Schuster, Stephanie Owens Lurie, read some of the poems and told me right away that she’d like to publish them if I could create more of a story shape.

After it was accepted for publication, I didn’t end up doing major changes, though I did have to drop some of my poems and subplots.

For instance, I really wanted to put in a poem about the pet rescue people who went around in boats and retrieved about 800 cats and dogs–even birds and fish. No room. Rebecca Davis (then also an editor at S&S), who has a wonderful ear for poetry, was the person to do the fine tuning with me. We discussed word changes and phrases here and there. Then off it went to the illustrator–and emerged as a book three years later.

I was worried that it would seem old and stale if it didn’t come out for years. Stephanie explained they had bought it as a universal story of loss and grief and putting a community back together…not just the history of one flood…and they thought it was fine to let it take its time.

In retrospect, I agree. Many people around this area have told me they couldn’t have handled the book earlier and were ready for reflection by the time it was published. And I’ve heard from so many people in other communities that have gone through disasters–natural and other–who told me that RFRW touched them, so I guess it is a pretty universal story even though it’s rooted in my own experiences.