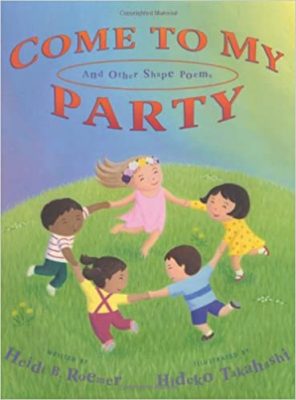 While perusing the children’s poetry section in my library one day, I happened upon Robert Frost’s book, STREET POEMS. This oldie but goodie, published in 1971, contained brief poems about objects seen in the city. I found the book fascinating because each poem was embellished with simple black lines. Together, text and lines created pictures which resembled each poem’s topic. I’d never seen anything like it. Even though the “poetry pictures” were colorless and some of the pictures artistically primitive, the book, I thought, was ingenious. This introduction to “shape” and “concrete” poetry sent me on a search to find more. All I could find at the time was SPLISH SPLASH by Joan Bransfield Graham (1994). By the time J. Patrick Lewis’ popular collection, DOODLE DANDIES arrived in 1998, I had already completed by own collection of seasonal shape poems.

I decided to concentrate on shape poems for several reasons. Reluctant readers and children who thought poetry was ho-hum would, I hoped, be visually lured—no, captivated—by the blending of text and art. Writing a collection that tickled the ear, delighted the tongue, and stimulated the eye was my goal. Another reason I chose to write shape poetry was because so few such books were available. This rare poetry form, I reasoned, would be a great way to pique an editor’s interest.

I began working on the collection in 1998. Those early days were challenging because I had to share the computer with three other family members. The interruptions were constant! At that time, we had a dial-up connection on the Internet. If my kids didn’t boot me off the computer mid-sentence (using homework as their flimsy excuse), AOL did.

Inconvenience was another problem. The computer was upstairs, but my desk was in the basement, two floors below. It never failed that my notes or a disk were downstairs when I needed it upstairs–and vise versa. I ran frequent short-distance marathons daily. Often, by the time I arrived upstairs (or downstairs), I forgot what it was I came to retrieve in the first place. During this stressful time, Moose Tracks ice cream became my solace. The major event that year was the arrival of my new computer. My husband installed it in my freshly painted office. Later, bless his heart, he installed a door with a lock.

Then, because all of my excuses had evaporated, I finally typed up the content page. I submitted my collection of thirty-seven shape poems to Boyds Mills Press. They gave CIRCLES, LINES, AND SEASONAL RHYMES serous consideration for eighteen months, but alas, a rejection letter arrived on June 16, 1999.

In August 1999, my heart renewed with courage, I decided to try again. this time I sent out five queries and enclosed sample poems. A month later, I listened to a message on my answering machine, hardly daring to believe what I heard. Henry Holt wanted to purchase my manuscript. I was pregnant with a book! I couldn’t wait to cradle it in my hands and show its jaunty little jacket cover to the world. LIttle did I know that my editor would produce two healthy human babies before my book would land on library shelves. When well-meaning friends asked me, “Is your book out yet?” this author-in-waiting squirmed. Sixty months gestation was not the time frame I expected!

The book, editor Christy Ottaviano cautioned, was labor-intensive. WordArt, the Microsoft program I used to manipulate the text and produce a professional looking manuscript, was problematic because Holt used Macintosh computers. Though my computer-savvy freind, Carol Brendler, found a download that had solved the problem, my illustrator, Hideko Takahashi, still experienced difficulties. The text and illustrations had to fit together like a puzzle. And before Hideko could crank into high gear on my book, she had to finish two prior commitments.

Once I signed the contract, infrequent updates from my editor assured me that production was moving forward, although slowly. I’ve heard Revision Horror Stories from other writers, but happily, this was not my experience. Christy requested only minor changes. I’d used the word “snuggle” twice, she preferred the spelling of “hippety, clippety” instead of “hippity, clippity,” and suggested we insert an “and.” Her biggest request was that I write one additional poem about Hanukkah. That was it!

One of the final challenges that we faced was selecting a memorable title. The marketing folks thought that CIRCLES, LINES, AND SEASONAL RHYMES was difficult to say and hard to remember. I agreed. After saying it myself for four and a half years, I realized it was somewhat of a tongue twister. After much brainstorming, we agreed that COME TO MY PARTY, borrowed from the title of one of the poems, would be perfect.

I’m pleased to tell you that COME TO MY PARTY, my just-released collection of seasonal poems for children, received a starred review from Kirkus. These exuberant shape poems literally dance across the page as they follow a child’s activities through the seasons; jumping rope, flying kites, building sand castles, and shoveling snow, to mention just a few. The artwork by Hideko Takahashi supports the text exquisitely. Best of all it’s available now in most bookstores.