SNUGGLE MOUNTAIN by Lindsey Lane, illustrated by Melissa Iwai (Clarion, 2003). Emma *really* wants a pancake breakfast, but oh! there’s so much between her and that plate. Warm, evocative illustrations. A perfect story for preK readers from a promising debut picture book writer. This interview was conducted via email in 2003.

I love to tell this story. It’s become a part of the readings. I was lying in bed, awake, just sort of enjoying the early morning quiet. Then I hear a thump. In my mind, I can see Gabriella’s fat little leg hitched over the side of the crib and hoisting her little body over the side. Then I hear a rattle, rattle, thump, thump. Now she’s slid down the side of the crib and landed on the floor. Next comes the pat-pat-pat-pat of her little feet to the side of my bed. I keep my eyes are closed so she thinks I am asleep. Next I can feel and hear her on the side of the bed trying to pull herself up and that’s when it hits me: I bet this bed looks like a mountain to her. I bet I look like a giant to her. Hmmmm….

I called my friend Ben Livingston right away. He’s a neon artist and we were sort of challenging each other to find our next project. When he answered the phone, I said, “Ben, I’ve got my children’s book. It’s called ‘Snuggle Mountain’.”

Let’s see, Gabi started walking at eight months so I bet she was flinging her leg over the side of the crib shortly after that. So I probably got the idea in October 1997. I went to the Texas Book Festival the next month and saw Naomi Shihab Nye. I asked her if I could show my work to her editors. She gave me the contact info for Virginia Duncan at Greenwillow and Stephanie Owens Lurie at Simon and Schuster.

Virgina said no. Stephanie said, Would I be willing to work on it? And she had a couple of suggestions. That was March 1998. I remember I did two revisions over the summer and fall.

By this time I was working with Michele Coppola, an assistant editor of Stephanie’s. In February ’99, I got a fax from Michele saying she wanted to propose it at the next acquisition meeting in March 1999 where it would get a yea or a nay. Then I didn’t hear from her. I think I called her and she said that she was taking a job at Clarion. I asked her if Snuggle went to the big monthly meeting and she said she didn’t present it because she wouldn’t be staying at S&S. Then she asked me if I wanted her to take Snuggle to Clarion since it wasn’t under contract. I think I asked, “Would that be a good thing?’ And she told me a story of telling a writer whose book was under contract that she was leaving and the writer burst into tears because Michele was the eighth editor she’d had since her book went under contract. Needless to say, I said, “Yes, take me with you.”

Clarion offered me a contract in June 1999. Melissa Iwai signed on in September 2000. I saw the first sketches August 2001. Michele and I were going back and forth about galleys and type styles in the fall of 2002 when she told me she would be leaving Clarion at the end of October and moving to Dutton. It was kind of a shock but I was glad for her. We’ve stayed in touch. The first copy of Snuggle Mountain arrived in my mailbox March 4, 2003. 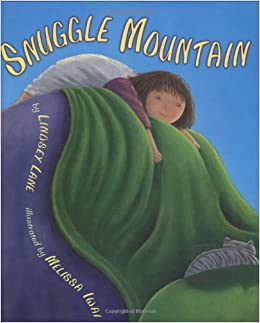 Aside from the logistical challenges above, I think the only other challenge was a literary one. I had initially written SNUGGLE MOUNTAIN as dark and scary place and I had used a lot of repetition to build the suspense and the sense of climbing something slowly and carefully. Well, the very first thing, S&S wanted changed was to not make it so scary. In toning that aspect down, I gradually lost the repetition. In trade, I gained a little room to build the story a bit more.

Working with Michele Coppola was great. She’s known as the rewrite queen by her writers. But 99% of her suggestions are very sharp. One of Michele’s main suggestions was to make it more child centered and playful. I understand why after reading Snuggle a few dozen times to children. I can see in their faces how they enter the story and they climb the mountain with Emma. They don’t need a scary giant or a growling dog or a hissing cat. It’s quite enough to be a small heroine climbing a mountain to wake a two headed giant whose forgotten to make pancakes for breakfast.