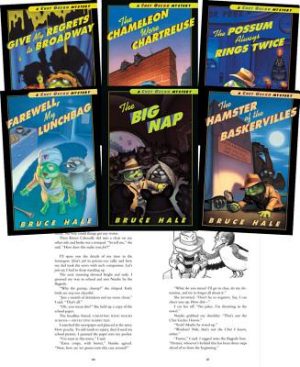 Bruce Hale is a highly recommended speaker. Visit him online for information about his life and Chet Gecko, Detective as well as events, writing a story, cartoon strips, and more! This interview was conducted via email in 2004.

What was your initial inspiration for creating these books?

I was living in Hawaii at the time (1997), in a house where geckos cruised the walls at night, sucking down bugs like Friday night at the drive-in. At an SCBWI National Conference, I’d heard that editors were looking for middle-grade mysteries and humorous stories. I love reading detective fiction, and thought I’d try my hand at writing a funny one.

Because I’d already published some Hawaiian picture books with a gecko character, I wanted to make my detective something different — a dog, a cat, an insurance salesman. But during a free writing exercise, I happened upon the character’s voice. He said: “Kids talk. They say I’m someone who can solve mysteries. They’re right. I can. Who am I? Chet Gecko, Private Eye.” And when I wrote that, I knew the gecko would not be denied.

The first story, THE CHAMELEON WORE CHARTREUSE, came pretty quickly. I didn’t know a dang thing about plotting a mystery, so most of my clues were in the form of riddles for Chet to solve. The voice came in loud and clear, though.

I sent it out in October 1997, and the manuscript was rejected. This pattern repeated itself 10 times over the next year. Finally, I got a nice note from the 12th publisher, Viking, saying they liked it and would I do a rewrite?

But before I’d heard back from them, I’d gone to the 1998 SCBWI Conference and met an agent there who liked the story. I told Viking, “hang on until I see what the agent says.” Good thing I did, too.

He sent the manuscript to Harcourt, where Michael Stearns got his hands on it. When Michael requested a rewrite, I did it. He signed me to a three-book contract for a Chet Gecko series.

By the time the first book came out, Harcourt wanted more. We added three more books, then three more after that. Chet Gecko now has nine mysteries (six of which are in print), and the series looks to continue beyond that. In fact, I’m working on the movie script right now!

First of all, my initial story was woefully short — 19 manuscript pages instead of 60. With Michael Stearns’ patient help, I made the book more “plotty,” adding more twists and turns. It grew with each rewrite (I believe there were five, altogether), until CHAMELEON reached the length it has today.

Psychologically, there were no problems. I was excited to have a three-book contract, and I had deep psychological insights into the mind of a gecko. (Actually, Chet Gecko is much like me, but with a tail.)

The ongoing challenge is keeping the series fresh, yet familiar. I add new characters all the time, and I have to keep checking Chet’s metaphors and puns to make sure I’m not repeating myself. So far, so good.