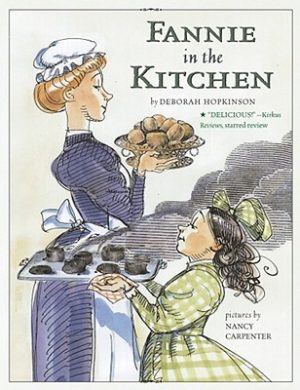 FANNIE IN THE KITCHEN: THE WHOLE STORY FROM SOUP TO NUTS OF HOW FANNIE FARMER INVENTED RECIPES WITH PRECISE MEASUREMENTS by Deborah Hopkinson, illustrated by Nancy Carpenter (Atheneum/Anne Schwartz, 2001). Marcia’s not the least bit pleased when Mama hires a mother’s helper who isn’t Marcia herself. After all, Marcia does such a good job making the floor-to-ceiling candles and polishing the oil lamps (despite breaking one or two). But Fannie’s cooking and friendship soon win her over. A humorous look at Fannie Merritt Farmer, who is sometimes credited with having invented the modern recipe. Nancy’s delightful illustrations are right-on-mark for this historical tale. Ages 4-up. This interview was conducted via email in 2001.

I grew up in Massachusetts, and one of my earliest memories was eating in a Fannie Farmer coffee shop on shopping expeditions with my mom. There was also a Fannie Farmer candy, and for years I probably never even realized Fannie was a real person!

I read a chapter about her in a book of women inventors, and at first passed over her. Then a year later, something tugged at me and I went back to see if I could craft a story for children from her remarkable life.

What impressed me the most was how she had overcome illness herself to forge a career at a time when women were still not encouraged to work outside the home.

This story was written over about eight months in 1996-97 and didn’t appear until 2001. I had a hard time with the material and did a number of drafts. But when I saw Nancy Carpenter’s clever, delightful illustrations it was all worth it!

Although I called several colleges in Massachusetts and the public library, I wasn’t able to find much factual information about Fannie Farmer.

So unlike some of my other historical fiction books (such as A BAND OF ANGELS), I consider this a very fictionalized take-off on a footnote to history. But I think that’s immediately obvious from the humorous style and the illustrations.

A real breakthrough came when I decided to break the story into “courses,” like chapters, and to play off the Victorian era in the subtitle: The Whole Story from Soup to Nuts of How Fannie Farmer Invented Recipes with Precise Measurements.

In her art, Nancy used a combination of Victorian clip art and her own original drawings. Nancy Carpenter and I are doing another book together, entitled APPLES TO OREGON, a tall tale based on the true story of the first apple trees to go to Oregon on a wagon, and I can’t wait to see what she comes up with next!