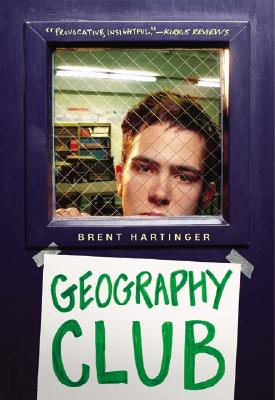 GEOGRAPHY CLUB by Brent Hartinger (HarperCollins, 2003). Russel Middlebrook has a secret from even his best friends at high school, that he’s gay. But an online chat offers an opportunity to meet up with another gay teen–who ends up being one of the best-looking athletes in school. These two cautiously connect with peers and then seek a place to be themselves, a place where they can talk, a place where people understand. Starting a gay-straight alliance seems too risky at first, so they form the “Geography Club” instead. Witty, smart, touching, even romantic–this debut novel signals an author to watch and applaud. Visit author Brent Hartinger. Ages 12-up. This interview was conducted via email in 2003.

In many ways, the book is my own story, since it includes many of the things I experienced in high school. In some sense, I think I wrote the book to rewrite my own adolescence, but give it a better resolution (and a happier ending!).

The actual inspiration came in the early 1990s, when I worked with a support organization for lesbian and gay teens. I soon realized that while lesbian and gay teenagers are incredibly diverse and come from every imaginable background, many of them–maybe even most–do share certain feelings in common: a sense of isolation, a fear of discovery, and an often desperate longing to find a place where they are accepted for who they are (and where they can safely do all the normal adolescent things, like have a crush on someone, talk about people they think are cute, and maybe find a girlfriend or boyfriend). The kids I worked with all shared a similar story, and it was one that I didn’t think had ever been told particularly well. So I decided to tell it!

My first attempt at a gay teen novel, which I wrote in the early 1990s, was rejected by every publisher in the known universe (even after winning a series of awards, including the 1996 Judy Blume/SCBWI Grant for a Best Young Adult Novel).

Everyone—and I mean everyone—was convinced that a book about gay teenagers would never sell, especially to school libraries, which admittedly made up a bigger slice of children’s books sales back then. I actually had one editor, who was very enthusiastic about the book itself, tell me, “We don’t have any slots in our list right now for books with low sales projections.” (I certainly didn’t project the sales for my book to be low!)

In 2000, my then-agent and I pitched a bunch of new book ideas to an editor who was looking for an ensemble series. On a lark, I decided to make one of my story ideas gay-themed, and to my surprise, that’s the storyline she wanted to see more of. So I wrote up an outline and a couple of sample chapters. She hated what I’d written, which is pretty much what I’d expected, so I forgot all about the project.

A year later, I reluctantly showed my new agent (Jennifer DeChiara) the sample chapters, and she absolutely loved them. We decided to pitch the project as a stand-alone book, and she took it out to new editors. A lot of them liked it, but even in 2001, I think more than a few were scared by the subject matter.

Fortunately, Steve Fraser, an editor at HarperCollins, loved it enough to actually buy it. In fact, he bought it just based on the outline and those two sample chapters, which I know is pretty unusual given that I was unpublished at the time. I was so certain he was going to change his mind (or be fired) that I pounded out the entire manuscript in the next three weeks–even before he and my agent were done negotiating the contract. The editing process was pretty painless (one draft), and I know my editor was thrilled with the result, because he has since bought three more of my young adult novels (for 2004, 2005, and 2006!), and we’re planning a middle grade series as well.

Since editing, HarperCollins has been unbelievably supportive. People from different departments still surreptitiously contact me to tell me how much they like my book and offering little ways to help (it’s like having a whole forest of little helper elves!). There have also been a few guardian angels from the greater world of children’s publishing, and they’ve been invaluable in helping to get the word out. I think a lot people have been waiting for a book like mine for a long, long time.

One interesting note: Now that the book is getting such good reviews and a fair amount of attention, I have had several editors say to my agent, “If I’d seen this in the manuscript stage, I would have bought it in a minute!” They may actually believe this, but I don’t think it’s true. The subject matter made this project a very hard sell.

I was determined that this not be one of those depressing “issue” books. So many young adult books are way too earnest, and most of the few existing gay teen books deal with really serious stuff like suicide or gay-bashing. These are real problems, but far too heavy for the book I had in mind.

I hope my book has a serious message, but I wanted to capture the fun and humor of adolescence too. And more than anything, I wanted this to be a book that people want to read—dessert, not broccoli! (Hey, whether we like it or not, we teen book authors are competing against Nintendo and Britney Spears in a thong!)

One psychological challege: Gay teenagers are typically coming to understand their own sexuality at earlier and earlier ages (it has to do with media exposure and more forthright attitudes about homosexuality, and it’s not necessarily a bad thing). Anyway, I wanted Russel, my main character, to know that he is gay from the very beginning of the book. But this wasn’t my personal experience at all, so I had to draw on my conversations with today’s gay teens and try to put myself into the head of a character that, in that respect, is very different from me.

An interesting literary challenge: My book is the story of a teenager who starts a secret gay-straight alliance at his school. But because he and his friends can’t tell anyone the true nature of their club—and because they don‘t want anyone else to join!—they give it the most boring name they can think of: the Geography Club. Since the name is a ruse, they don’t learn any actual geography, but I did intend for them to learn about a “geography” of sorts—specifically, the rigid social terrain of most American high schools. I knew this had to be done with a light touch, because I hate heavy-handed metaphors. Frankly, I’m not sure I succeeded—but I definitely did try!

Another challenge: I hate stereotypes, and I’m bored by how jocks and cheerleaders are always so evil in so many books. So in my book, I decided to shake things up. Sure, there are some jocks who are jerks in my book, but the main antagonist is actually one of the geeks. It was fun to go against the grain, but it was difficult to give a real sense of menace to such an inoffensive character. But I’m more confident that I succeeded here.

Finally, I wanted a protagonist who is likeable, but the plot requires him to do some pretty unlikeable things. The book is about having integrity and standing up for people who are different, but for my character to learn about integrity, he has to behave like a jerk for a time. It took a couple of drafts to get just the right amount of jerkiness—enough to make a point, but not so much that the reader loses sympathy.