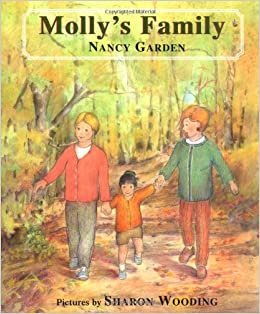 MOLLY’S FAMILY by Nancy Garden, illustrated by Sharon Wooding (FSG, 2004). Friday is Open School night, and so Molly draws a picture of her family to help decorate the classroom. But then Tommy says Molly’s family can’t be a real one because she has a Mommy and a Mama Lu (by the way, she has a puppy, Sam, too). What is Molly to think? Soft, warm illustrations are just right for this family story. Ages 4-up. This interview was conducted via email in 2004. Visit Nancy Garden.

Despite the fact that more and more children are now being born into and adopted by gay and lesbian couples, there are still very few books about and for those children. Although we like to think children raised by gay and lesbian couples don’t have any problems stemming from their “different” families, in truth, they are as subject to misunderstanding, teasing and bigotry as are other minority children. When close friends of ours adopted a baby and, a year and a half later, another, I wanted to write a book that might help those two kids and their friends understand and value their special family as they grew up.

I can’t tell you exactly, but quite a few years! The two babies I mentioned above are now eight and nine years old. I wrote a number of versions of MOLLY (and rewrote each version several times) before I got it right.

In the first one, which I think was called MOLLY’S HOUSE, Molly was the daughter of divorced parents. She lived with her mother and her mother’s partner and visited her father. The story changed many times, but the constants were Molly, Mommy, Mama Lu, and Molly’s best friend (initially called “Tamara”), and Molly’s puppy, who was called “Buster” in the first story and was a present from her father. Tomy didn’t arrive on the scene till a later version, but he was in several stories.

The issue in the first version was having two famlies instead of one like everyone else, and having to live in two houses. In protest, Molly built a house of her own out of a cardboard refrigerator carton, but eventually decided having two families and two houses wasn’t so bad after all.

Ms. Marston and Tommy and Tanya appeared in what I think was the second version, MOLLY’S SCHOOL. In that one, Mommy explains to Ms. Marston that Mama Lu is her partner, not Molly’s babysitter. There were a couple of versions of that one, and, eventually, I began working toward the teasing/misunderstanding. Along the way, I even wrote a story about a little girl named Melinda who had two moms–and I wrote another Molly story that was a fantasy.

A huge challenge was the fact that I’d never written a picture book or a picture storybook before. I did some research on my own, and my best friend, author-editor-teacher Barbara Seuling, who started out as a picture book writer/illustrator, gave me some valuable pointers. And my wonderful Farrar, Straus, & Giroux editor, Margaret Ferguson, led me through the process step by step; both Margaret and Barbara taught me how to make a dummy. I made several, which was kind of fun.

The writing was a challenge, too. I’m a novelist primarily, so paring things down to a few words was really hard. I have tremendous admiration for people who write picture books! Margaret had to keep reminding me, too, that the story had to be very visual, to give the illustrator lots of material.

I was very lucky that Sharon Wooding, the illustrator we finally got to do MOLLY, is a friend of mine; we’re in the same writers’ group and some years ago, we did some team teaching together, showing school kids how to make books. Sharon’s an enormously talented artist, and I love the pictures she made for MOLLY. Because we’re friends and live near each other, we were able to work together more than many author-illustrator pairs can, and Margaret kept both of us informed of what was happening to the book every step of the way.

Another challenge, I guess, was the fact that I also wanted to write a book for kids in GL families in which the alternative family issue was very much in the background.

I’ve never forgotten a little girl at a gay writers’ conference I spoke at a number of years ago who said that what she and other kids in GL families wanted was books in which their parents were treated the way heterosexual parents are in most books, i.e., kept in the background.

Even though in HOLLY’S SECRET, my 2000 novel for (ages) 8-12, I wanted an alternative familiy issue to be central to the plot, I was still committed to writing a book or books in which it was in the background, and when I started to work on MOLLY, I wasn’t sure how I wanted to treat it in a book for very young children.

While I was still working on MOLLY, I did write a two-moms book in which having two moms isn’t an issue (THE CASE OF THE STOLEN SCARAB, coming soon, I hope, from Two Lives Publishing), and eventually, I decided I would make it an issue in MOLLY.

I think we need both kinds of stories for kids in GL families, books in which having two moms or two dads does lead to problems–for that’s realistic no matter how much we’d like to believe it isn’t–and books in which it doesn’t lead to problems or in which the problems aren’t central. But the bottom line here is that we need more books for kids in these families–for they, like kids in all minorities, need to see validation of themselves in books.