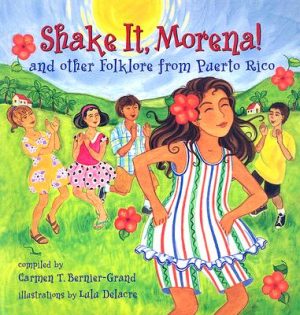 SHAKE IT, MORENA! AND OTHER FOLKLORE FROM PUERTO RICO by Carmen T. Bernier-Grand, illustrated by Lulu Delacre (Millbrook, 2002). A lively author-illustrator team treats young readers to the songs, riddles, stories, and games of their own Puerto Rican childhood. The colorful illustrations reflect the diversity of the people and the charm of their many traditions. Excellent choice for classrooms. Ages 4-up. This interview was conducted via email in 2002.

SHAKE IT, MORENA is a collection of games I played, songs I sang, stories and riddles I heard growing up in Puerto Rico.

The idea of publishing it came from many librarians and many teachers who said there was a need for this bilingual material. My thanks to them.

I began playing these games again when my children were in pre-school.

SHAKE IT, MORENA was published this spring.

My children will be seniors in college this fall.

This collection was the only manuscript of mine that has been hard to sell to a publisher, mainly because it is educational folklore. Millbrook Press publisher Jean Reynolds bought it as soon as she read it.

Organizing the material was a challenge. I had too much of it, and I didn’t know how to link it. I finally filed some games for another book, and organized the rest so it would go through the girl’s school day.

The other challenge was for Millbrook Press to find a Puerto Rican illustrator. Lulu Delacre, of course, was the perfect choice. She even added the tiles in the porch of my grandparents’ house and their chickens. I sent her some photos, but she didn’t know I played these games in that house. She didn’t know how important it was to me to have something of that house in the book. It is amazing how an illustrator sometimes can read the writer’s mind!

A secret: The Juan Bobo story in the book is really a Pepito story. But in Latin America, you don’t tell Pepito stories to children. Pepito is too much, to say the least. So, I gave this “clean” tale to Juan Bobo who sometimes acts like Pepito. That gave me a chance to portrait the mountain jibaro culture of Puerto Rico.

It has been a thrill to share this material with educators and students, but more so with parents. I use the book in an interactive presentation in which the parents share with the audience their own childhood games, songs, stories, riddles. It’s fun!