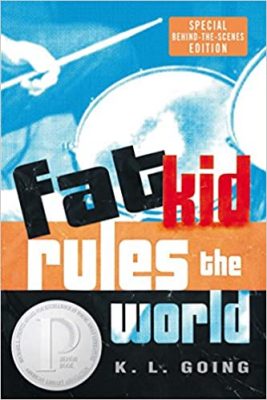 FAT KID RULES THE WORLD by K.L. Going (Putnam, 2003). This strong, sometimes funny, often touching teen novel is the story of Troy Billings—an overweight and emotionally isolated guy whose life seems worthless until he meets quasi-homeless guitar master Curt. In no time, Troy finds himself the socially recovering drummer in Curt’s new punk rock band. Problem is, Troy can’t play the drums and Curt, well, he might just need rescuing, too. Outstanding voice and sense of place. Highly memorable characters. A tour de force for the fat kid in all of us. Ages 12-up. HIGHLY RECOMMENDED. This interview was conducted via email in 2003.

The idea for FAT KID RULES THE WORLD came to me in a single line which popped into my head while riding the subway. It’s the first line of the book. “I’m a sweating Fat Kid standing just over the yellow line…” That line raised a lot of questions. Who is this kid and why’s he standing over the yellow line? I was listening to a lot of Nirvana right about then – really getting into vintage punk – so Curt was a natural outgrowth of the excitement I was feeling about the music, and a tribute or nod so to speak, to Kurt Cobain. I wanted to create characters who were larger than life, so that lead to Troy being physically larger than life and Curt being musically larger than life.

This novel came together relatively quickly. I know exactly when I began the “thinking” part of the work, because I remember riding the subway one morning (I was living in Brooklyn at the time and working in Manhattan) and feeling so excited about these characters and the way the ideas were forming. It was a gorgeous Tuesday morning – not a cloud in the sky – and I was really excited. Only that day was Sept. 11th, so by the time I reached my office the first plane had hit the World Trade Towers.

I’d just moved to Brooklyn, so I didn’t know anyone there and I think I spent a lot of hours obsessively writing this story as a kind of escapism. I work full time (+) so that meant every spare hour was spent typing away. I completed the book in January (I believe) and started giving it to readers in the early winter months. I know the publishing business, and I knew my novel wasn’t exactly on par with the traditional YA, so I felt like I had a 50/50 chance that people would love it or hate it. When the first read came back positive it was encouraging, but the first person who read it was a punk rock guru type of guy, so I thought maybe he just liked it because it was his type of book. It took a long time before I believed people would let me get away with my huge sweating, nose-wiping characters sitting around dank diners and subway stations.

When it was finally polished and ready to go, my agent (who is also my boss) sent the manuscript out on a Friday afternoon and I prepared myself for a long wait. I gave myself a strict lecture about patience. Then I heard from the first editor the following Tuesday morning. She didn’t know I worked for Ginger, so she called and asked if I had any more information about this “Kelly Going” person. I stammered a lot and lost every agent related skill I’d ever learned at Curtis Brown. I was so afraid I’d say the wrong thing, I just kept telling her she needed to talk to Ginger.

By May I had the contract and Kathy Dawson and I spent the summer months editing. By fall FAT KID was on its way and I had ARCs…

Well, first of all, I am not a punk diva. In fact, I came to this music really late. I’m almost thirty and I just discovered punk this past year. This was good because it allowed my excitement to be fresh and authentic, but it was hard because I had to do a lot of research. I spent lots of time at Kim’s video on St. Mark’s taking out grainy documentaries and buying bios of Johnny Rotten and Iggy Pop. (Iggy Pop is the greatest, by the way!) I was lucky because I had Mark, that first reader I mentioned, who would answer lots of basic questions for me, lend me CDs, and debate the merits of bands. Lots of fun.

I also know nothing about drums. In fact, I sat on the floor of Barnes and Nobles and read Drumming for Dummies until I got kicked out. That’s the extent of my drumming knowledge.

I’m also not fat, and I’m a girl. But these were the easiest obstacles to overcome. Troy’s voice is not far from my own. I am the Queen of Self Consciousness and Troy’s fat is really just the physical embodiment of this. I’m also more than capable of coming up with really off the wall reasons why people will hate me and everything will suck. So, it’s not so hard to be the sweating Fat Kid…

I think the most challenging literary aspect was making Troy and Curt lovable enough to be sympathetic without cleaning them up. I wanted Troy to be big and fat and horny and sweaty. Things that make people uncomfortable. And I wanted Curt to be gross, and dirty, and he steals and lies. It’s important to me that the reader come to love what is unlovable about them, because in that way the reader is not passive but active. They’re on a journey, too. I don’t change the physical aspects of either character through the novel – in fact, Troy gains weight by the end and Curt loses some. What changes, hopefully, is the reader’s ability to love, so when Troy says he’s redeemed, it’s not just him. It’s all of us.

I also wanted the novel to be true to punk music, not just in content but in form. I wanted the chapters to be stacatto since most punk songs are short, and this was something that Kathy and I worked on extensively. I put in a lot of imagery that is in-your-face and tried to play with language in the same way punk musicians play with language. Kurt Cobain has a great line where he sings, “An albino, a mulatto, a mosquito, my libido” and basically he’s saying he’s horny in this really clever way. I tried to let that kind of spirit influence my writing as often as possible, so instead of saying that Troy is shocked, I’d say, “I am the walrus, perched upon the muddy slope when the ground disappears below him.” It’s over the top, but so is punk music. That was a lot of fun to write, but I had no idea if it would work.