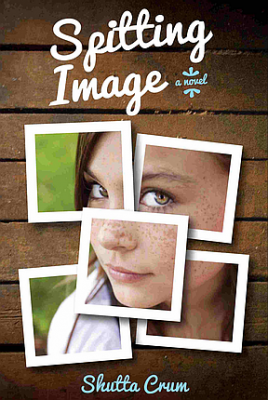 SPITTING IMAGE by Shutta Crum (Clarion, 2003). Jessie is the child of a single mother who wonders why nobody will tell her about her dad. A story of friendship, family, and community set brilliantly against its historic Kentucky backdrop. Crum is a debut novelist to celebrate. Ages 9-up. This interview was conducted via email in 2003. Visit author Shutta Crum.

What was your initial inspiration for creating the novel?

Quite simply, my sisters was the inspiration for SPITTING IMAGE, and I had her firmly in mind through the writing of it. She was a tough “tom-boy” type, quick with her fists, yet firm in her love and loyalty. So I wanted for some time to write a story using her as a model. Then I came up with Grandma, just as stubborn and feisty as Jessie.

A couple of months later, I learned of an incident that happened in Letcher County, Kentucky, in 1967. A Film Board of Canada photographer, Hugh O’Conner, had been filming poverty in the area under the auspices of the U.S. government. He was shot and killed by a local landlord. The man who killed him was only sentenced to one year in prison.

My local PBS station aired a documentary film about the case, “Stranger With A Case.” It explored the issues of shame and dignity, and talked of how people felt when they became the poor ones pictured in the media for the entire world to see. Suddenly I knew what my story would be! And I would set my story in my native Kentucky, a place I have great love and respect for.

I remember turning to my husband and saying, “That’s it!” I knew I could use this incident to build a plot around. So I did, and SPITTING IMAGE is dedicated to my sister, Brenda Crum Proos.

I took the first character notes prior to having any idea about a plot, in April 2000 in coffee house in New York City where I was on my own while my husband attended a conference. I also jotted ideas down for a male friend that later developed into Robert.

We saw the “Stranger with a Camera” documentary, I believe, in June of that year. That was when I started writing. I had a first draft done by December. It went through many readings and revisions with help from my critique group (Bless them! A very hard-working group who were willing to take on the task of critiquing with a completed draft, not chapter by chapter).

I think I submitted it in the spring of 2001 and it went through one complete revision with Dinah Stevenson, the editor, prior to getting an offer to publish. She made an offer on the revised version later that summer, or early fall. We worked on it with at least five MAJOR revisions and numerous smaller ones until about early fall of 2002. It came out in the spring of 2003.

So all total, the book took three years from the moment I first jotted down some ideas about the characters, and two years from the initial submission. And believe it or not, there were still some tweaks prior to its second printing, which occurred two months after the first! (It sold so well it went into a second printing almost immediately).

Since I had spent many happy summers down South in the 1960s, I really did not have to do too much research. Most challenges were in refining my draft of the novel. The most significant was to develop Robert, Jessie’s friend.

I’d conceived this purely as a vehicle for Jessie and her grandmother. But my editor kept pushing me to write more scenes for Robert, and to fill out thin scenes in which he appeared. She made me go back and discover what Robert–and Baby Blue to some extent–was doing even when he wasn’t in immediate action. It was a real learning experience for me! Consequently, I feel the story is much richer for having done that.

Also, handling the explanation about Jessie’s father was delicate matter. How would a mother in the 1960s talk about what had happened to her? She probably would not use clinical terms, or terms we hear in the newspapers today. She would have been much more tentative and fearful.

I worked a long time on that chapter.

Finally, my humor was much more broad in the original draft. Dinah said, initially, that the book felt like it had two personalities–serious and slapstick. I had to cut many funny passages and tone down the broad southern humor. But hey! Those are not lost passages: maybe they’ll appear in another work someday. Who knows?