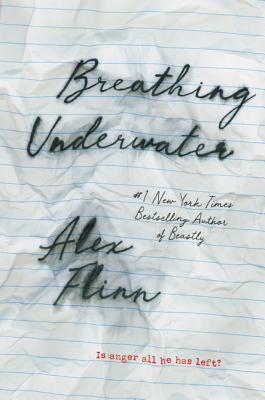 BREATHING UNDERWATER by Alex Flinn (HarperCollins, 2001). Wasn’t long ago that Nick and Caitlin were in love. How did they end up in court with a restraining order being issued against him? In this first person narrative, Nick tells the story himself. It’s certainly rare — perhaps unprecedented — to read of an abusive relationship from the perspective of the abuser. In this case, it’s also illuminating. Ages 12-up. This interview was conducted via email in 2001. Visit author Alex Flinn.

I did a lot of volunteer work with battered women and their children. When I started writing YA, I realized that there was little written on this subject for teens—though dating violence is a very common problem with teenagers. I read a study that said 27% of high school and college girls reported that they had been hit or abused by a boyfriend.

I started writing a version of BREATHING UNDERWATER in May of 1996, and it was published in May, 2001. I’d originally started writing this book from several viewpoints, but mostly focusing on the victim of dating violence.

In January, 1998, I was fortunate enough to attend a workshop with renowned author, Richard Peck. He was incredibly encouraging (Being encouraged by the likes of RICHARD PECK is really something!), but also told me, “You’ve got six books here. You need to choose one viewpoint.”

At that point, I’d become very interested in the idea of the cycle of violence (Father abuses son — or son’s mother — and son becomes abusive himself. Likewise, girls are more likely to become future victims).

As I said, I’d worked with domestic violence victims and their children. I was particularly concerned about these children — many of whom were doomed to repeat this cycle in their own future relationships.

Once I got this focus, it took me less than a year to write the book in Nick’s viewpoint. It was like he was in my head, telling me what happened. When the manuscript was finished, I was again incredibly fortunate to meet another young-adult writer, Joyce Sweeney, who introduced me to her agent. My agent took me on as a client in late August, and the book was sold to HarperCollins in early October, 1999.

Challenges were mostly research-related. I had worked with domestic violence victims and also interned at the State Attorney’s office, prosecuting the perpetrators of these crimes, so I knew a lot about what happens in this type of relationship.

But BREATHING UNDERWATER is about a boy who goes through counseling to deal with his violent tendencies. I really knew nothing about what went on in these counseling programs. I had, however, always been curious about the programs and the recidivism rate (the rate at which people who have gone through such programs repeat their crimes after getting out), so it was really interesting to talk to people who work in such programs and read books about what can be done for men with these tendencies — very hopeful and encouraging, actually.

From a literary standpoint, my only worry was that no one would “get” a book about dating violence from the viewpoint of the abuser.

But I was, once again, incredibly fortunate (seeing a pattern here?) to find a publisher, HarperCollins, who did. When Harper acquired my book, they were in the process of publishing MONSTER, a book by Walter Dean Myers about a boy who was (probably) involved in a drugstore robbery.

My editor, Antonia Markiet, saw the potential of this sort of viewpoint character — the idea that just because someone does something bad doesn’t mean they ARE bad. I will always feel lucky to have found Toni, because she is really an out-of-the-box thinker, but she knows a lot about young-adult literature and what works. She made it easy to walk a tightrope because she allowed me to forget I was walking one!