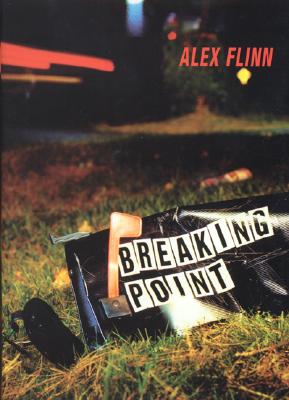 BREAKING POINT by Alex Flinn (HarperCollins, 2002). Paul Richmond is cannon fodder for the elite of his high-toned private school. Then Charlie Good asks for his help in computer lab, his help fixing a grade, his help with more violent pursuits. A cutting edge novel for thinking readers trying to survive the social and moral landmines of high school. Ages 12-up. This interview was conducted via email in 2002.

I was interested in the spate of school violence events and what schools could do to prevent them. Reading the newspaper, there seems to be an implication that any kid who was a loner was suddenly a potential shooter. I think these implications are making life very difficult for a lot of kids right now.

However, I also think it must be really difficult to have to go to school every day with the very real possibility that something violent will happen. Whatever problems might have existed when I was in school, this wasn’t one of them. I think it’s really tough for teens.

I remembered my own desire to fit in during that time. I was always a loner myself and can remember really wanting to have friends and be part of things. I became interested in exploring a relationship between a teen who, like myself, was sort of naive (Not to say, dorky) and another, who wants to take advantage of this innocence for his own purposes.

I started writing BREAKING POINT in 1997, during a lull in writing what is now BREATHING UNDERWATER. I put it down for about a year to complete BU, picking it up again in May of 1999. It was accepted for publication in October, 2000.

When I started writing BREAKING POINT, school violence incidents were little more than a blip on the horizon. I was really writing mostly about peer pressure and its horrible possibilities. By the time I finished the book and it was being edited for publication, school violence had become a huge problem and that became the focus of the book.

As with BREATHING UNDERWATER, making people understand what the character is going through and how that makes him do what he does — even if we can’t possibly agree with it.

An additional challenge was that I was dealing with a character who was basically a weak personality. That’s why he capitulates to this other boy. I wanted readers to understand what made Paul do what he did. They didn’t necessarily have to like him. Some readers have. Some have liked the book despite the fact that they don’t like Paul.

BREAKING POINT seems to appeal to a lot of teens who are otherwise not big readers. Many have said that BREAKING POINT is about the type of thing that really happens in schools. I find that a little sad, but there it is.