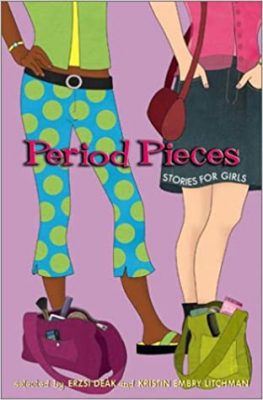 CYN NOTE (2020): If this anthology were published today, it’s likely that the subtitle would be “Stories for Kids.” We are moving away from period shaming and now have a great appreciation for the gender continuum.

ED: Kris will tell you, too, that when you get a group of women around a table talking about life, life’s landmark experiences come up. I remember saying (and so does Kris! See, we were meant to do this book together!), “We should do a book and call it ‘Period Pieces’!” And then we did! KL: A group of regional advisors for the Society of Children’s Book Writers and Illustrators (SCBWI) were sitting around the dinner table at a conference one night, admiring a beautiful ring of one of us was wearing. She told us her mother gave it to her when she had her first period, and we all started telling our own stories of our first periods. Some of us looked at each other and said, “That would make a great book!”

ED: I loved this idea from the start and saw that women wanted to tell their stories. Having three daughters edging toward puberty, I thought the book was a perfect fit for this age-group (and, as it turns out, for “grown up” women, too, as it’s a great conversation topic!).

I submitted the proposal to five publishers. One was interested, but wanted to have “famous periods”—at this point the book was more of a gathering of testimonials. One wrote to “Mr. Deàk” and declined. One never got back. Another wanted it and got back to me within ten days and the editor eventually left the publishing house, in part because the editor’s superior didn’t want buy into the idea, in the end.

HarperCollins got back to me in a week and won the deal. The writing and editing highlighted the amazing world of email, as Kris and I emailed back and forth daily and then, when Rosemary Brosnan (our editor at HarperCollins) was in the loop, emailed with her regularly as well.

All the editing was done before I even discovered the tracking changes option in Word! Now, it would be so much easier to detail every change! For our next project. . .

KL: Erzsi suggested that people write their stories and send them to her, and I volunteered to help. We nagged and pushed, and finally got a group of eight stories together a year later to make up a proposal. We wrote our own stories and sent them to each other to edit, worked with the other writers on other stories, and wrote a proposal letter.

We did all this by email ‘ tremendous back-and-forth between Erzsi in Paris and Kris in New Mexico. Then Erzsi submitted it to five publishers. HarperCollins accepted it, but said they wouldn’t accept all the stories we submitted. It was like submitting artwork and text for a picture book: there’s the chance that one or the other might be accepted, but not both. In the end, only four of the original submissions made it into the book.

Two years ago, when Erzsi and I were in NYC for the SCBWI conference, we were asked by our editor to sit down with her and make a list of authors to approach. Which we did! Then began a year of asking authors to write a story for our collection, getting rejections (that word again!) and acceptances from authors.

As the stories came to us, we made editorial suggestions and sent them to Rosemary. This process lopped over into the third year, which finished with lots of panicky rewrites, re-edits, line edits, galley proofs. We sent almost daily emails back-and-forth for about three years.

ED: Challenges. . . as Kris says, it’s about writing our own stories, but also about finding riveting stories that we loved or in which we saw potential. It was also about seeing our vision morph into the book it actually became.

Psychologically, it was about speaking with one voice when discussing anything about the book (It was an absolute pleasure to work with Kris and to rev up the editing engines across the Atlantic — I live in France and have been a professional editor and Kris lives in New Mexico and is a terrific editor ‘ but she’ll tell you we’re very different people).

Logistically, we return to the Internet, again. It was our link to each other and all the writers and the publisher. Anytime one does an anthology, dealing with the permissions for the work and making sure everything is in order is a big job (just keeping track of the details — money, commas and dotted I’s!). Course I said, “Never again” and now have two anthology proposals circulating. It’s a bit like childbirth (for me!) ‘ one forgets the nine months work and the pain, and then does it again!

KL: Challenges came with writing our own stories, with tracking down willing and enthusiastic authors, with having to turn down work from friends (hardest, for me). The emailing wasn’t too bad; occasionally, when we really got stuck, Erzsi would phone me. We’d anguish back-and-forth over problems, and we spent a lot of time writing joint letters to email to Rosemary; we wanted to make sure we were united in our decisions.

We also had to deal with finances, taxes, permission slips and so forth — not the favorite activities of writers. And then there was the title: Erzsi and I favored “Period Pieces” from the day we were swapping stories nearly four years before, but it took a while to convince some of the HC people. They added “Stories for Girls,” and we’re all happy!

Erzsi and I had never met before that regional advisor conference. I’m twenty years older than she, and we live thousands of miles apart. Yet we have worked very well and happily together. I, for one, have enjoyed the process and have learned an enormous amount about writing, rewriting, editing . . . and taxes!