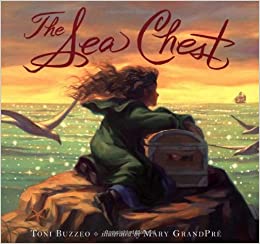 THE SEA CHEST by Toni Buzzeo, illustrated by Mary GrandPre (Dial, 2002). A book that lovingly and poetically captures the stirring magic of a foundling babe who becomes a treasured sister. Maita says: “I longed for a time I might not be the only child the craggy island knew.” The time is now. Spectacular, musical, and deeply affecting. This interview was conducted via email in 2002. Ages 4-up. Visit author Toni Buzzeo.

I am a school library media specialist at Longfellow Elementary School in Portland, Maine. Each year, I host two or more authors/illustrators at my school for wonderful days of sharing their work with my students. I was preparing for just such a visit—from Washington author Deborah Hopkinson, whose BIRDIE’S LIGHTHOUSE was newly published at the time—and was reading and viewing lighthouse materials to share with my fourth grade teachers who were planning to wrap their preparations around BIRDIE and Maine history. I purchased a video entitled LIGHT SPIRIT, which is a lovely film featuring all of the more than sixty lighthouses still standing on the coast of Maine.

I first encountered “the baby in the sea chest” legend on LIGHT SPIRIT. From the very first viewing, I knew that it had the makings of a wonderful children’s book. However, finding my way into the story–finding the structure and the point-of-view character— proved to be a challenge!

That spark happened in April 1998. It wasn’t until June 1999 that I found my way through the door and into the story. My dear friend Jane Kurtz (author of many books including two new ones, RAIN ROMP and WATER HOLE WAITING) and I were traveling together. As writers often do, we were talking about our stories one morning and Jane spoke these fateful words to me, as I tried to describe my dilemma with the telling of the legend as a fictional story, “Well, if it were my story, it would be a sister story.” And that proved to be the way in!

I went home and wrote the story in a white heat. It went to two editors that fall and winter. The first rejected it with a wonderful, meaty rejection letter that initially threw me into despair, and then, with the help of my close friend Franny Billingsley (author of WELL WISHED and THE FOLK KEEPER), led me to a new and better version of the story. The second editor fell in love with it, guided me through another fabulous revision, and took it to her publisher who ultimately rejected it. She and I were both heartbroken.

That summer, the book won the SCBWI Barbara Karlin Grant for best unpublished picture book manuscript, the most exciting day of my writing life to that point! It gave me such faith in myself, my writing, and this particular manuscript. And then, only five weeks later, Lauri Hornik at Dial Books for Young Readers made me an offer!

As I’ve noted, it was extremely difficult to find my way into the story. As I tell kids in my many school and library visits, if I told the story from the point of view of the lighthouse keeper and his wife, it would be an adult story. If I determined to tell it from the rescued baby’s point of view, it would either be impossible (because the baby was pre-verbal when rescued) or completely without tension (because the grown child’s problem would have long since been solved).

It wasn’t until Jane talked about writing a “sister story” that I realized that I had yet to discover the main character, a lonely, only child growing up in that isolated place with only her parents and the chickens under the porch. Because I was myself a lonely only child for the first nine years of my life, until my parents fostered my first sister, Maryanne, and then birthed my biological sister, Karen, I completely understood Maita’s emotions and wrote straight from the heart.

When I first encountered the story on LIGHT SPIRIT, I believed the legend to be true. It was presented in just this way. As I followed up in books about Maine and New England lighthouses, it was always presented in this manner, as a true story. Thus, I wrote the story believing that it was true. It wasn’t until I met Barbara Skinner Rumsey, Director of the Boothbay Region Historical Society in Boothbay, Maine that I realized that the story was, quite likely, a legend. She shared her primary source research with me as well as the articles she’d written for THE BOOTHBAY REGISTER, citing the complete lack of mention of the baby in the lighthouse logs of Hendricks Head Light for the time. I came to believe, along with Barbara, that the story was a legend. However, many people still believe that it’s true. (You can read more about the origins of the story in the Author’s Note in THE SEA CHEST).

After Mary GrandPre had completed her sketches for THE SEA CHEST, I had the lovely pleasure of doing some illustration research for the book, as Mary wasn’t able to come to Maine from her home in Minnesota. I conducted my research at the Portland Public Library, especially in the Portland Room, as well as at the Maine Historical Society Research Library, the Maine Maritime Museum, the Boothbay Region Historical Society, and the Boothbay Harbor Memorial Library, where director John Clark was a wonderful help. It was a fabulous opportunity to learn more about the sea vessels of the time—I discovered, for instance, that there wouldn’t have been a mail boat to that fictional island and had to trade it, in both text and illustration, for an infrequent supply boat. Finally, I sent off a box of Maine shells, driftwood, and wildflower books and prints to Mary so that the natural world would be authentic in Mary’s paintings.

It was a wonderful journey for a college English major with two minors, one in American History and one in Psychology. The journey of writing THE SEA CHEST depended on all of this training and more. I feel so lucky to have had the opportunity to write this book and to share it with so many enthusiastic readers!