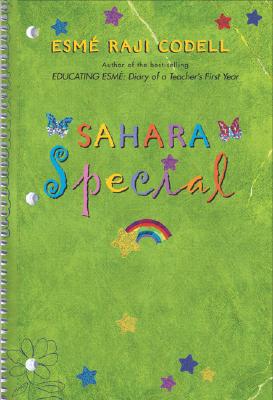 SAHARA SPECIAL by Esme Raji Codell (Hyperion, 2004). Sahara is special–not because of her history in “special education,” not because of what her official school file might say. And Miss Pointy, a tour de force in human originality wrapped up in one fifth grade teacher, helps her realize that through journal writing and her own unique style of support. Fresh, funny, fantastic! A must read for everyone who has ever be or will ever be a teacher or student. Codell (of Planet Esme fame) offers up one of the most affecting and inspiring first novels in recent memory. Ages 8-up. HIGHEST RECOMMENDATION. This interview was conducted via email in 2004.

I was inspired to write SAHARA SPECIAL because I left teaching to write full time, and I missed the children. I realized that by writing a classroom story, I could have a vicarious classroom and revisit all the things that go on there, only in my imagination. I found that writing is a lot like teaching, in fact. Both are about communicating. Both are about sharing something honest and useful in the hopes it will help someone else along, help people recognize themselves not only for who they are but who they can be.

I have always loved the traditional classroom, because the setting is so weird, it’s almost like science fiction. Where else in the world do people sit in rows, ask to go to the bathroom, raise their hand to speak? Where else are the talents and abilities of so many souls subject to the approval of a single person (besides, maybe, “American Idol”)? I thought the limitations of setting were challenging as a teacher, and they were challenging while I was writing as well. Can things happen within such a structured, um, structure? The answer in both real life and fiction came from abandoning the idea of a classroom as a place of business where the lifeblood of the place rests with keeping a certain protocol, and instead thinking about the classroom as an artist’s studio, where each person is trying to paint a picture of the year they’d like to have. There’s a lot of possibility in a classroom like this. And that’s inspiring to me.

The book took about four years from brainchild to binding.

In creating a vicarious classroom, I made a seating chart, to make sure all of the children got some attention from the teacher. I referred to the seating chart a lot as I wrote because it helped me make sure things made sense logistically; that kids could pass notes without being caught, that kids could steal things and get caught. The characters in SAHARA SPECIAL took up a very real space in my imagination. I also wanted a certain amount of noise going on to make sure there was a sense of a crowd of individuals, which is what it feels like to me in a classroom. Writing banter helped to define the children within the crowd and create that familiar noise. Luckily, dialogue has always come easily to me; all those years of reading comic books and eavesdropping in restaurants must have paid off.

Originally the text was about four hundred pages. I needed to write those pages so I could get to know the characters and have situations to choose from that best told the story. I knew in my heart I would have to cut a lot; I didn’t usually like long books as a kid, so it wouldn’t be fair to write a long book and expect a kid like I was to read it! Editing was grueling. At times it felt very masochistic, determining what to cut, but in the end I learned a lot from looking at my work in a more ruthless way, stepping back and trying to decide what was really needed.

The other challenge came from writing a story with problems in it. I don’t like books with lots of heavy problems. I like to laugh when I read. I like sunny-happy-Betsy-Tacy stories, old fashioned stories that read kind of like sitcoms. When I was writing SAHARA SPECIAL, though, it seemed like I couldn’t help but be a little grim in describing Sahara’s circumstances, living in the city with a single parent, and that claustrophobic feeling of walls all around that I knew so well growing up in Chicago. It was very frustrating that I was not good at sunny-happy-Betsy-Tacy out of the gate. Then I realized that problems would be okay if I treated Sahara like a real child, having faith in her and surrounding her with people who could help her. I realized if Sahara could start out with adversity and make it through, then kids who would read my book who might be experiencing hard knocks could see that things could change for them, as well. I guess it’s as the author Richard Peck suggests in his book INVITATIONS TO THE WORLD, sometimes a character has to earn her happy ending. I think Sahara does.