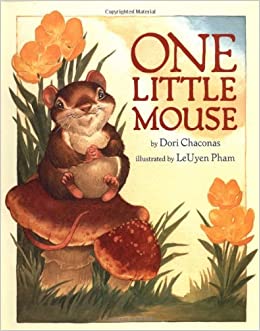 ONE LITTLE MOUSE by Dori Chaconas illustrated by LeUyen Pham (Viking, 2002). This perfectly rhyming picture book is not only a celebration finding the just-right home, it also makes a great counting book. Pham’s illustrations are cute without being too cutesy and also humorous in how evocatively they convey the little mouse’s emotions. Ages 4-up. Especially recommended to pre-K teachers. This interview was conducted via email in 2002.

When I was a kid, I was attracted to all things smaller than me – especially if they were cute and fuzzy – like mice, rabbits and birds. We had an old tree in our backyard, with a split in the base of the trunk. I would imagine that all sorts of small friendly critters lived secretly inside that split, and that they’d come out one day to be my personal, devoted pocket friends.

All they needed was a bit of magic, and one day, prompted by my determination and longing, I thought I’d figured it out! I rummaged through my mom’s sewing drawer and made a small set of curtains that I thumb tacked to the opening in the tree. What creature could resist making an entrance through these magic curtains? Perhaps a mouse in plaid pants, or even a fairy? Well, I sat, and watched, and waited a whole day with my eyes on that curtain. (I was a weird kid.) And you know what happened??? Nothing happened!

Eventually, I gave up on the curtains and turned to my pencil to create the type of creatures I wanted. I wrote, and drew pictures, and through my writing all those elusive critters could be prompted to life.

ONE LITTLE MOUSE was written in the late ’60’s. I was writing for children’s magazines, and was also fortunate enough to have three picture books published. But although I loved writing in rhyme, I had no experience in marketing it. I think I sent the story out once or twice before packing it away.

I found it thirty years later and was surprised to find I really liked it. It had held up well over the years. I worked on it again, to tweak and polish, then sent it off to my online critique group. Linda Smith loved it and sent it to her agent, who called me for permission to submit it to publishers. The story sold in less than a month.

When I wrote the original draft of ONE LITTLE MOUSE, I knew nothing about writing rhyme. I ‘heard’ rhyme in my head, but couldn’t define its principles or dissect its components. Nor did I realize that I’d chosen a difficult rhyme scheme, using internal as well as ending rhymes.

One little mouse took a look at his house
Deep in the woodland ground.
His nest was too small. Not roomy at all.
“There must be a new one around!”

When it came time to work on the final rewrite, having learned a bit more about writing in rhyme, I almost scared myself out of doing it. I questioned why I had chosen such a complex rhyme scheme in the first place?

The answer became clear. Ignorance. I hadn’t known any better and simply wrote what was in my head.

Now I try to do that with everything I write. I’ve learned a lot of the rules, but often put them aside so they don’t get in the way of writing what’s in my head and in my heart.