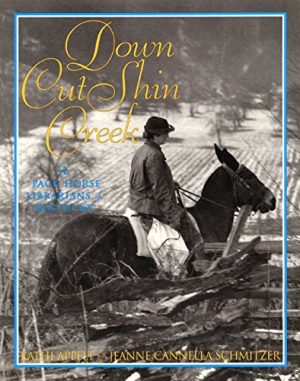 DOWN CUT SHIN CREEK: PACK HORSE LIBRARIANS OF KENTUCKY by Kathi Appelt and Jeanne Cannella Schmitzer (HarperCollins, 2001). A fascinating and inspirational look at the courageous and determined women who brought books to the rural areas of Kentucky during the Great Depression. This foray into nonfiction by Schmitzer and super-versatile Appelt is a must-read not only for librarians and their fans but also history buffs and particularly those who enjoy books with strong, real-life girls and women. Ages 9-up. This interview was conducted via email in 2001. Visit author Kathi Appelt.

When my older son, Jacob, was in the ninth grade, he had to do a research paper and his topic was the WPA. Of course, he waited until the eleventh hour to get started on his paper and so, even though I was angry with him for putting it off for so long, I told him I’d help him with his research.

His teacher had told him that he could use up to two resources from the Internet. So, while Jacob was going through the library books, I went on-line. Well, it turns out there are thousands of sites about the WPA, but there was one called “Kentucky Pack Horse Library Project.” I went to the site and there were these wonderful photographs of women delivering books by horse and mule through the mountains of Kentucky.

It wasn’t anything that Jacob could use, but with my life-long affection for all-things-horse I bookmarked the page and returned to it a couple of days later. Then I contacted the webmaster who turned out to be Jeanne Cannella Schmitzer, a librarian in Cookville, TN and we started corresponding with each other.

One day, she invited me to come with her to Beattyville, KT to interview a woman named Grace Lucas who had been one of these librarians. Of course, I jumped at the chance, and both of us just fell in love with Grace and her story. I felt so touched and impressed with Grace’s life and the impact that she and her co-workers made on the lives of so many people, that the book was almost inevitable.

This book took a solid two years of research and writing, including two trips to Kentucky. Jeanne did the bulk of the research, which she used to write her thesis for her MLS; then I did the actual writing. I did a small amount of research too, but Jeanne did most of it.

This is the only book in which I’ve really collaborated with someone else, and it turned into a terrific experience. Jeanne and I both learned to keep out of each other’s way, and we also drew upon each other’s strengths.

Jeanne is a real historian, someone who has published widely and she kept me from exaggerating–something I’m prone to do as a fiction writer. My experience writing for a young audience gave me the edge when it came to interpreting the information and deciding upon what we needed to include and what would have to be left out. We were extremely lucky with the project in that we had access to so many incredible photographs, most of which were taken by WPA photographers. Many of them are just beautiful, and they make the book feel extremely satisfying. We had a lot of people pulling for us too, including a host of Kentucky librarians and a handful of Texas librarians, all of whom came up with answers to our questions and really coached us as we went along.

The hardest part for me, as I was writing this book, was to figure out where the “story” was. The key to writing non-fiction is finding the story inside the facts. I really struggled with that for a number of months. It took several rewrites and hundreds of pages of “moodling” to finally figure out what the facts were telling me and how they needed telling. I had to dig deep before the story presented itself. And I’m so glad that it did. I think of the book as a tribute to all those librarians who have been there for me, and continue to be there. I don’t know what I’d do without them!