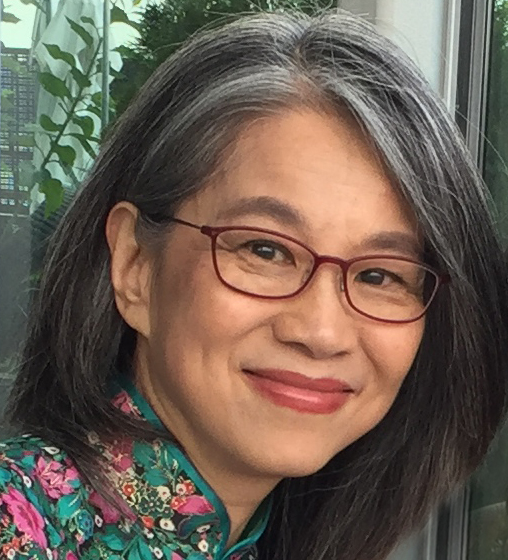 Today we welcome author-illustrator Ying-Hwa Hu to Cynsations to share insights on her craft and what fuels her creative spirit. We’re also highlighting her solo author-illustrator debut, Ten Blocks to the Big Wok (Lee & Low, 2022), a colorful celebration of Chinese culture.

My senses come alive at night when all is quiet. Though there is no total silence in the city at any given moment, nighttime has its special charm. So many stories to tell when the world is suspended in darkness from 1 a.m. to dawn.

However, I do pay a heavy toll for staying up at night. It normally takes me two to three days to recover from a night of indulgence. I try to do it less often, but the temptation is always there. 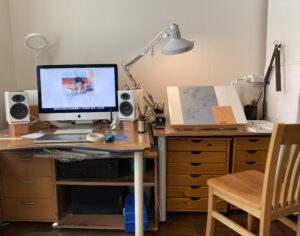 My desk and my computer are stationed next to my drawing board in the living room. Combined, they are my space. It’s convenient to be able to do writing, painting, and digital art all in one corner.

I was a wide-eyed twenty-something when I visited San Francisco for the first time. My great uncle, who had spent most of his adulthood in town, showed me around the city’s famous Chinatown. In his seventies–but walking way faster than me up those notorious hills, he’d stop to chat with a friend while waiting for me to catch up. Seeing the way he and his friends bowed to each other and joked around, I knew I was in good company. He told stories of his legendary family as we hiked through the streets. Though I had known a little about them, it sure felt different when he told the tales–so full of pride and joy.

Chinese family stories tend to have a Rashomon effect, it all depends on who’s telling it. I came to love his versions best.

I felt like a trusting child when I was trailing Great Uncle up and down Chinatown. We ended up at a dim sum tea house. He ordered small dishes from the push cart while the waiter brought us a pot of tea. In the next hour, we talked. Well, he talked mostly, and I listened. He told me how he had held mayorship in a large Chinese city, lived through two World Wars, moved across the ocean and raised his family in San Francisco’s Chinatown. He was a walking, and talking, history book.

I had wanted to write about that trip since. Many years passed and the story still lingers. Yet, it’s not about the details of the family stories; some have long faded from memory. It was the bright sunny walk we took on that summer day. The sights and sound along the way. The neighbors greeting each other with a bow.  And mostly how Great Uncle not only knew everyone in the entire Chinatown, but every dish in the restaurant! Yum!

The first doodle I drew of this story was an old man holding hands with a five-year-old girl. (My drawing and writing sometimes overlap because images help to bring out the story for me.) That’s how I remembered myself on that cheery walk.

But who should accompany an energetic five-year old to the Big Wok dim sum restaurant? I thought of my youngest uncle, my mother’s baby brother. Being only two years older than me, he was my closest sibling while growing up. He often waited for me when my brothers went ahead. I loved the fact that he would also share his goodies, the best brother-uncle ever. I now had my two main characters.

But how should I tell a story about a five-year old to my audience? Shouldn’t my readers also be five? My husband suggested turning my story into a counting book to capture the attention of the younger readers. I gladly took the advice.

Finally, I was ready for Mia and Uncle Eddie to take Ten Blocks To The Big Wok for some dim sum! 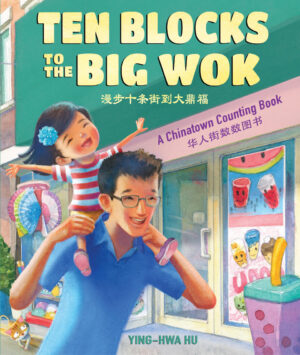 What appeals to you about writing picture books? What are the craft challenges of writing for this age group?

Picture books are magical. I was first captivated by picture books at age seven when taking piano lessons. I had no musical talent but was spellbound by all the picture books in the teacher’s waiting room. The colorful illustrations and the stories excited my imagination. I doodled in my notebooks and wished I would be telling stories with beautiful art someday. However, not until I became an illustrator did I start to learn what it really means in making a picture book.

A good page in a picture book may need only a few words, or none at all. It’s a marriage of picture and words. If words can tell it all, I don’t need to add another element in my picture. But if the picture, like a thousand words, has already expanded the imagination, why words?

The balance is delicate. It’s the bonding of the writing and art creating a moment of wonder.

The real challenge for me, however, lies in my mindset. If I can’t understand a child’s language, how can I speak to them? I was fortunate to have had a chance working with young school children in the middle of my career and observed their day to day activities.

I learned that children are direct in their feelings. They do not go around trying to figure out if you like them. They are not bound by time, and they learn best when they play. When writing for young readers I have to throw away my cynical adult hat and begin to feel with the instinctive senses of touch, taste, smell, sight and sound. Early language learners relate well to stories with elements of repetition, counting, alphabets, rhyme (e.g., Ten Blocks To The Big Wok), and they are in a world of non-complicated emotions. Once I enter that state of mind, I am able to speak their language. 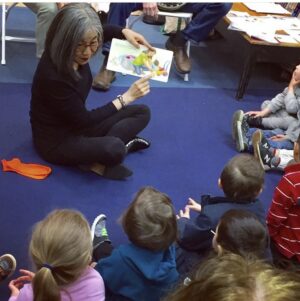 Growing up in Taiwan, books were my refuge and entertainment. My parents had a big shelf full of books, including Romance of the Three Kingdoms by Luo Guanzhong, Water Margin by Shi Nai’an, Journey to the West by Wu Cheng En, Dream of the Red Chamber by Cao Xueqin, and Strange Tales of Liao Zhai by Pu Songling (a collection of ghost stories that makes one’s hair stand on end), among many others. Ancient Classical Chinese is difficult for a child. I may have understood half of what I read but somehow was able to enjoy all of the stories. They became my Turkish delights of the soul.

My childhood favorite story character was an immortal monkey created by Wu Cheng En in Journey to the West. Born out of a rock and later becoming king of the monkey paradise, he is bursting with curiosity and mischief. However, Wu’s Monkey King is also cynical and, like all the other characters in the story, has feelings just like ours. The witty sarcasm of the Monkey King is quintessentially Chinese, both pensive and hilarious. His personality, somehow, seems to mirror a hidden part in us. Adopting the concept of reincarnation, Wu spared his characters, including the villains, from eternal damnation but demanded penitence. In Journey to the West’s one hundred chapters, teeming with monsters, demons and demoralized gods devising chicaneries with magic to harm, none escapes justice. It’s satisfying.

In my early teens, Wu Xia novel series (Martial Arts fictions in period settings) was immensely popular among young Chinese readers. These series came in large volumes (and) sometimes reached thirty or forty plus. Parents largely disapproved these books for their uneven qualities.

But one author captured the hearts of both parents and their teens. Louis Cha, a newspaper man, treated wu-xia serializations like history novels, authenticating people groups, languages, customs, battle grounds, and actual battle scenes. His historical investigation is first-class. His attention in substantiating evidence, changed my view towards writing. He’s also fearless with his pen and kills off his heroes without mercy. No apologies. His characters in The Condor Trilogy, though fictional, make us sit on edge when they face danger and beckon our tears when their hearts break. And unlike other wu-xia writers, Cha sculpts his villains in multi dimensions that compels us to ponder.

The most intimate influence on my writing, however, comes from my oldest brother Tony. He inherited our mother’s charm in storytelling and later became a journalist writing crime reports for newspapers. Tony was a talented writer. His words were clean and concise, filled with keen observation. He took his audience into the crime scene and examined the minds of the criminals as if we were the detective. I often walked away after reading his articles feeling I hac just witnessed the crime.

As I grew older, I learned to read different genres and searched out my own voice. But the enchanting words that shaped my world in the early years have never grown old.

Ha, aren’t we all under that spell? I had a Language Arts teacher who moved to Italy after my high school freshman year. We started a correspondence that lasted a few years. I remember eagerly waiting for her letters or postcards. We talked about our days, ordinary things. But her travel log–-her short trips to Africa, to Spain, to Switzerland, to Chicago—all fascinated me. By reading her adventures, I wanted to see the world, too. The seeds that were sown during our exchange of letters eventually took me across the ocean to find out for myself what life could be like in a different land amongst people who speak a different language. 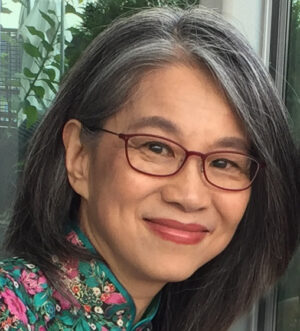 Trained to be a classroom teacher, Ying-Hwa Hu entered into picture books by answering a publisher’s search for interior illustrations of a book series. From there, Hu continued to illustrate, often collaborating with her husband, Cornelius Van Wright, on more than fifty children’s books. Their books include Sam and the Lucky Money by Karen Chinn (Lee & Low, 1995); Jingle Dancer by Cynthia Leitich Smith (Morrow Junior, 2000); Snow in Jerusalem by Deborah da Costa (Albert Whitman, 2001); and Alicia’s Happy Day by Meg Starr (Star Bright, 2005). Many of her award-winning picture books depict children from diverse cultural backgrounds. Together, she and her husband launched Pencilmoon Studio to showcase their voices in art making. 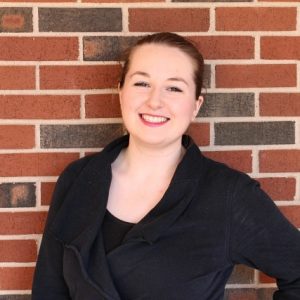 AJ Eversole covers children’s-YA writing, illustration, publishing, and book news from Indigenous authors and illustrators for Cynsations. She grew up in rural Oklahoma, a place removed from city life and full of opportunities to nurture the imagination. She is a citizen of the Cherokee Nation of Oklahoma and writes primarily young adult fiction. She currently resides in Fort Worth, Texas; with her husband. Follow her on Instagram @ajeversole or Twitter @amjoyeversole.