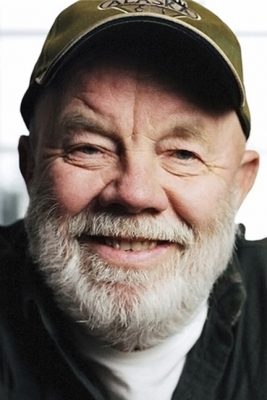 Newbery award-winning author and children’s literature icon, Gary Paulsen has passed away. He was 82 years old.

Beloved Author Gary Paulsen has Died Aged 82 via MacMillan. Peek: “It was Paulsen’s overwhelming belief in young people that drove him to write. His desire to tap deeply into the human spirit and encourage readers to observe and care about the world around them brought him both enormous popularity with young people and critical acclaim from the children’s book community.”

Obituary: Gary Paulsen by Shannon Maughan from Publishers Weekly. Peek: “Paulsen left California for northern Minnesota in 1966. He rented a lakeside cabin and by the end of that winter he completed his first novel, Mr. Tucket […].Though he worked jobs as a ranch hand, truck driver, and sailor at various times in his life, it was his role as author that stuck.”

At the news of Gary Paulsen’s passing, an old memory whispered to life. In it, I’m surrounded by a swarm of students, spread out on the gym floor of my elementary school. The air is tinged with humidity as excitement rolls through it. We were expecting a special visitor. For me, this would be the first author visit I had ever attended. A moment that would shape my life as a writer for years to come.

Propped up on my knees, I crane my neck to get a better look through the crowd. A man I’d never seen before appears at the corner of the stage. His face is kind and his smile is genuine, like there is no better place to be than talking to a group of students on a day where the near summer heat presses in around us. Once he starts speaking, I’m enraptured. Every word an adventure, each story more intriguing than the last. Until that moment, I didn’t realize authors existed. I thought books magically came to life and stories created themselves.

Gary Paulsen changed all of that.

Gary Paulsen was born on May 17, 1939 in Minneapolis, Minnesota which would be the beginning of his adventurous life. A life that would later be the focus of his memoir Gone to the Woods: Surviving a Lost Childhood (Farrar, Straus and Giroux, 2021).

The early years of his life were spent between homes staying with various family members, until he returned to living with his parents at the age of seven. In order to escape his troubled home life, Paulsen would spend time at the local library. There he was given his first library card and introduced to his love of books and encouraged to write down his “thought pictures” by the town librarian.

In addition to the library, Paulsen would often escape into the sanctuary of the woods near his home teaching himself how to hunt, fish, and trap animals. Skills that were later featured in books including his Newbery award-winning book Hatchet (Bradbury Press, 1987). Unable to escape the trouble at home, Paulsen ran away at the age of 14 and joined the circus. Though he later returned and graduated from high school,  Paulsen admitted he was not the best student.

After graduating from high school, Paulsen worked multiple jobs including a stint in the Army, farming, construction, and racing sled dogs in the Iditarod. It wasn’t until he was working as a satellite technician in California when he realized he wanted to fully pursue a career as a writer. He walked off the job and never looked back.

Paulsen would go on to write over 200 books and 200 short stories and articles for young readers including Hatchet, The Winter Room (Orchard Books, 1989), and Dogsong (Bradbury Press, 1985) all of which won the Newbery Honor. In addition to the Newbery Honor, Paulson also received the American Library Association Margaret Edwards Award which is given to a writer for a significant and lasting contribution to children’s literature. His final novel Northwind is set to be released in January 2022 from Farrar, Straus and Giroux. His books have sold more than 35 million copies.

After Paulsen’s passing, his editor Wesley Adams (Executive Editor of Farrar, Straus and Giroux) remarked on his time working with Paulsen in an email interview and offered insight on why his work resonated with young readers years after it was published: “Gary Paulsen was one of the creators of his generation who showed other authors how to operate in an honest, genuine, authentic way and how the work of winning over a young audience is the most rewarding, most important literary work possible. Gary showed the importance of never taking the easy route, of never dumbing down but always speaking up to kids and teens.”

After news of his passing broke, members of the community paid tribute to Paulsen including Society of Children’s Book Writers and Illustrators, Scholastic, and School Library Journal to name a few.

Paulsen’s impact on the children’s publishing industry is infinite and far reaching. From that moment on the gymnasium floor, Gary Paulsen redirected the path of my life and I am forever grateful. Thank you, Mr. Paulsen, for shaping the lives of young readers and writers for decades to come.