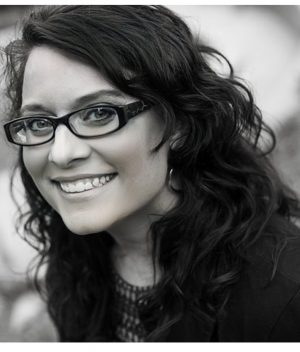 Today Cynsations welcomes Shelli R. Johannes. Shelli shares with our readers the ups and downs of her publishing journey and how she stays the course. She also shares with us what types of stories she likes to tell and how she has come to be inspired by the importance of what she calls “YOUniqueness.”

As a young adult author, how did you get into writing picture books? 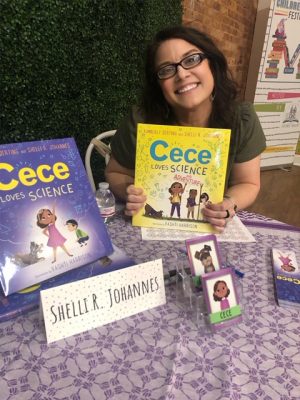 I started writing in 2004 when my daughter was born. I got five months of maternity leave as a bank executive, but I didn’t know what to do with myself. I was bored and desperate for some mental stimulation. I decided to write a book. I had always written when I was younger and even won contests, but I could never seem to find the time as I got older. The maternity leave gave me the time, space, and permission to finally write. I didn’t know anything about formal writing structures or craft.

I started out writing teen thrillers and still love to write them. But once I had kids, I started seeing the challenges they faced in elementary school and even into middle school. Some of them are addressed in picture books, but some of them seemed overlooked. I didn’t know how to write picture books, so I never considered it seriously until my kids got to an age where I suddenly realized that outside influences affected their opinions just as much (if not more) than my own teachings.

My first picture book idea came to me when my daughter suddenly didn’t want to attend science camp one year (after always loving it so much!). She said, “Science is for boys, and it isn’t fun anymore.” That shocked me!

My husband has a Ph.D. in topography, and I have done a lot of conservation work with animals. We are a science family, so how would she get that message? And from whom?

I immediately got an idea to create a “Fancy Nancy for Science.” There weren’t many STEM books at the time, and I knew that if I wanted to make a difference, I should shoot to give kids positive messages at a much younger age.

I called my friend and co-author, Kimberly Derting, and together we sold the Loves Science series, illustrated by Vashti Harrison and Joelle Murray (Greenwillow).

After that, I started getting more and more picture book ideas as my kids came home and said things that I felt a book might address. Whether being bullied, not fitting in, or an opinion, I realized that maybe I could make a difference if I wrote positive messages that could influence children much earlier.

Reflecting on your personal journey, what bumps did you encounter, and how have you managed to defy the odds to achieve continued success?

In 2005, I joined SCBWI and started studying the craft of writing. I haven’t stopped writing since. But getting published was a whole other story. I had a challenging journey. It took me five years to get my first agent, who was terrific. I had several different books go to acquisitions at top houses but could never make the final cut. I did some book packaging work that never panned out. I also did some exclusive submissions and revise and resubmit opportunities with editors that didn’t get picked up for whatever reason.

Eventually, my agent and I parted not because of anything either of us did but because we realized we were not the right fit on my projects or the next steps in my career. I was so disheartened with the business, I quit writing, shut down my popular blog, and stepped away from the industry for over six months. I was done. 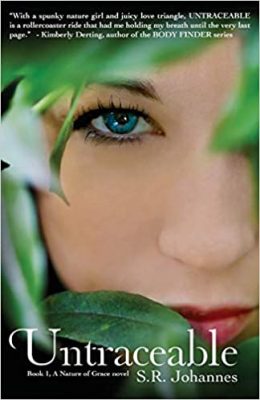 In 2011, I missed writing so much, I came back. But this time, I gave up on traditional publishing for self-publishing. With my marketing background, this path required everything I was good at. But self-publishing wasn’t popular at the time. Therefore, it wasn’t much supported by organizations or some traditional authors/agents. Many peers were very vocal about not supporting me in the process.

I spent money on covers, editors, typesetters, and formatting. In November of 2011, my first book, Untraceable, hit the Amazon top 10 charts and sold over 100k copies in a short time, winning several indie awards and a great review from Kirkus. “The Nature of Grace” series ended up selling over 250k e-copies worldwide. I have since published a couple of other stand-alone books just for fun and will continue to self-pub because I absolutely love the whole process!

After that experience, I didn’t think I would ever seek an agent again. But in 2013, I met Lara Perkins of Andrea Brown Literary Agency at a conference. She was critiquing a new YA I was working on. We clicked immediately, and she really got my writing.

More importantly, she had done some work in the digital publishing space and was one of the first professionals who recognized my self-publishing accomplishments. She signed me on with the new project, and we’ve been together nine years. To date, we’ve sold ten picture books (that I’ve co-authored with Kim) and three solo picture books.

Could you tell us about your new releases?

I have several releases this year. My first solo project, Theo Thesaurus (Philomel, 2021), came out on May 18th and is illustrated by Mike Moran. It’s about a dinosaur who loves colossal words and is often misunderstood. The first one is about how he manages at a new school when no one talks like him. A second book is already in the works for 2022. This came about because my son often uses words that are a little out of context. 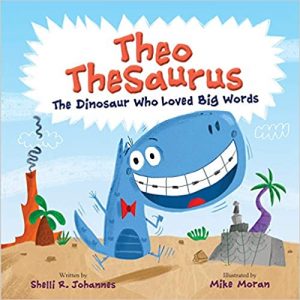 My second solo project is Shine like a Unicorn, illustrated by Maddie Frost (HarperCollins, 2021), and it comes out on Sept. 21. It’s about a unicorn who decides to tell the reader the nine secret steps to being a unicorn and how to stand out and be different so you can celebrate your YOUniqueness. 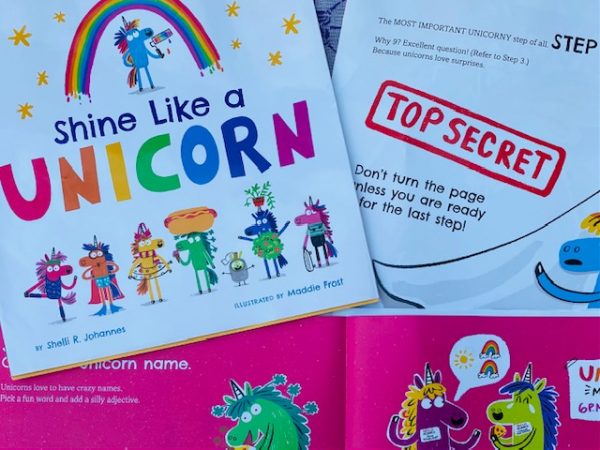 This is a great year, and I am very grateful because I do not take it for granted.

It seems that your upcoming picture books ruminate on the theme of being misunderstood yet still celebrate the character’s uniqueness. Can you tell us more about what inspired these types of stories?

The short answer is my kids. They inspire all my books. Unfortunately, my kids don’t tend to fit in at school or on teams. They both have struggled with being bullied in physical, emotional, and mental ways, and it’s been so hard to watch. They even moved schools because of it. As a parent, it’s heartbreaking.

The only thing you can do (besides advocate for them) is love and encourage them to be who they are. Don’t change for anyone.

But through it all, we’ve always held the belief that the so-called “misfits” are the unique and creative kids who will someday do something super great. Those themes tend to stick out in my work. Theo Thesaurus is about a dinosaur who just doesn’t fit in and always feels misunderstood. Unicorn is about how to be a unicorn in a herd of horses and love it!

I always asked my kids: If you see a unicorn and a herd of horses, which one do you want? Let’s face it. We all want the Unicorn! These picture books are my way of encouraging kids to embrace their uniqueness and not be afraid to be different. Eventually, you will find your people…or other unicorns.

What’s been the biggest surprise to you about publishing?

That it is a roller coaster. The ups and downs are hard to ride through.

You got an agent! Yay! Your book didn’t sell. Boo.

You sold a book! Yay! But it’s not coming out for three years. Boo.

Your book got a starred review! Yay! But it didn’t get picked up widely in stores. Boo.

You won an award! Yay! But the publisher doesn’t want more. Boo.

You sold more books in a series! Yay! But we have to find a different illustrator. Boo.

They love your book! Yay! But another editor bought something like it. Boo.

Your book got picked up in Target! Yay! But they didn’t want the second one. Boo.

Riding that wave is so hard, but I find that’s when we as authors persevere the most and realize we can’t take any success for granted. We just celebrate it as it comes. We have to take the good with the bad and try not to let ourselves get too high and then drop so low. It can be exciting and challenging and disappointing and fun—all at the same time.

I’ve learned I can’t get caught up in the ups and downs of this industry. I celebrate my wins and work through my losses one step at a time. I’ve also learned that I’m at my happiest when I’m just writing what I love. 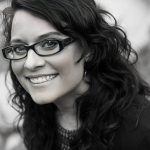 Shelli R. Johannes is coauthor of the Cece Loves Science picture book series, co-authored with Kimberly Derting. Her 2021 releases are Theo Thesaurus, How To Be A Unicorn, and Vivi Loves Science. She also writes teen thrillers as SR Johannes (the Nature Of Grace series, Rewired, and On The Bright Side)

Shelli never warmed up to creepy-crawly bugs, but she always loved zoology and biology. In fact, she can often be found on highways and country roads saving strays and other jaywalking critters, or volunteering with animal conservation groups like the Atlanta Zoo, the Dolphin Project, and Bosley’s puppy orphanage. After earning a master’s in marketing and working in Corporate America for years as an executive, Shelli traded in her heels and suits for flip-flops and jeans so she could follow her passion of writing.

Shelli lives in Atlanta with her husband, two kids, one bird, two crazy-haired goldendoodles and a big imagination.

Stephani Martinell Eaton holds an MFA in Writing for Children and Young Adults from Vermont College of Fine Arts where she won the Candlewick Picture Book Award and the Marion Dane Bauer Award for middle-grade fiction. She is represented by Lori Steel at Raven Quill Literary Agency. Connect with her at stephanimartinelleaton.com.