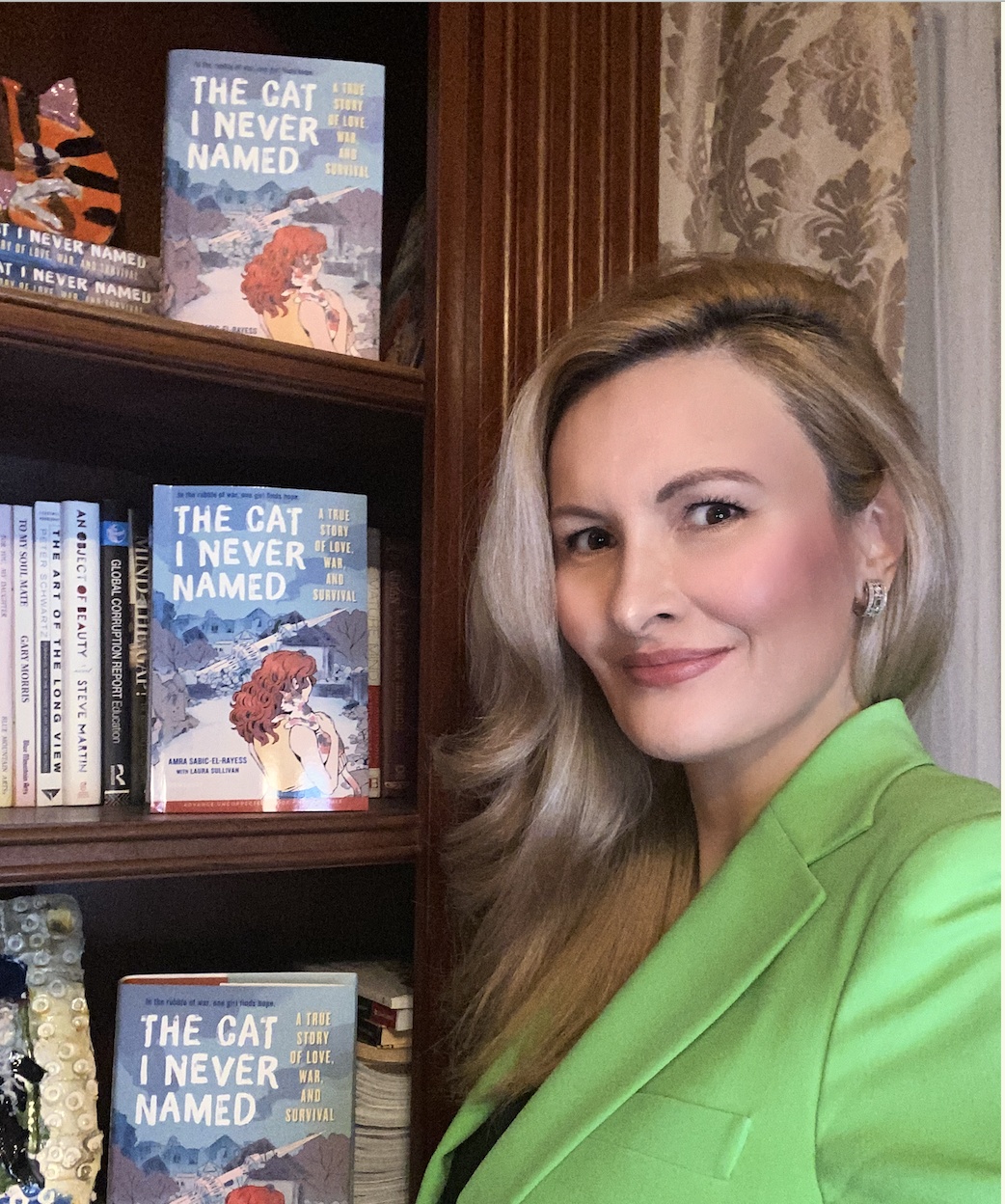 Today we welcome Amra Sabic-El-Rayess to Cynsations. Her acclaimed memoir with Laura L. Sullivan, The Cat I Never Named: A True Story of Love, War, and Survival (Bloomsbury, 2020) was a YALSA finalist for excellence in nonfiction.

Amra’s author biography describes her book as “a timely warning to Americans against othering, radicalization and hate. Amra’s story is a remarkable journey of humanity, resilience and determination to gain education and counter hate even in the face of the unimaginable.”

Welcome, Amra. Could you tell us about The Cat I Never Named? 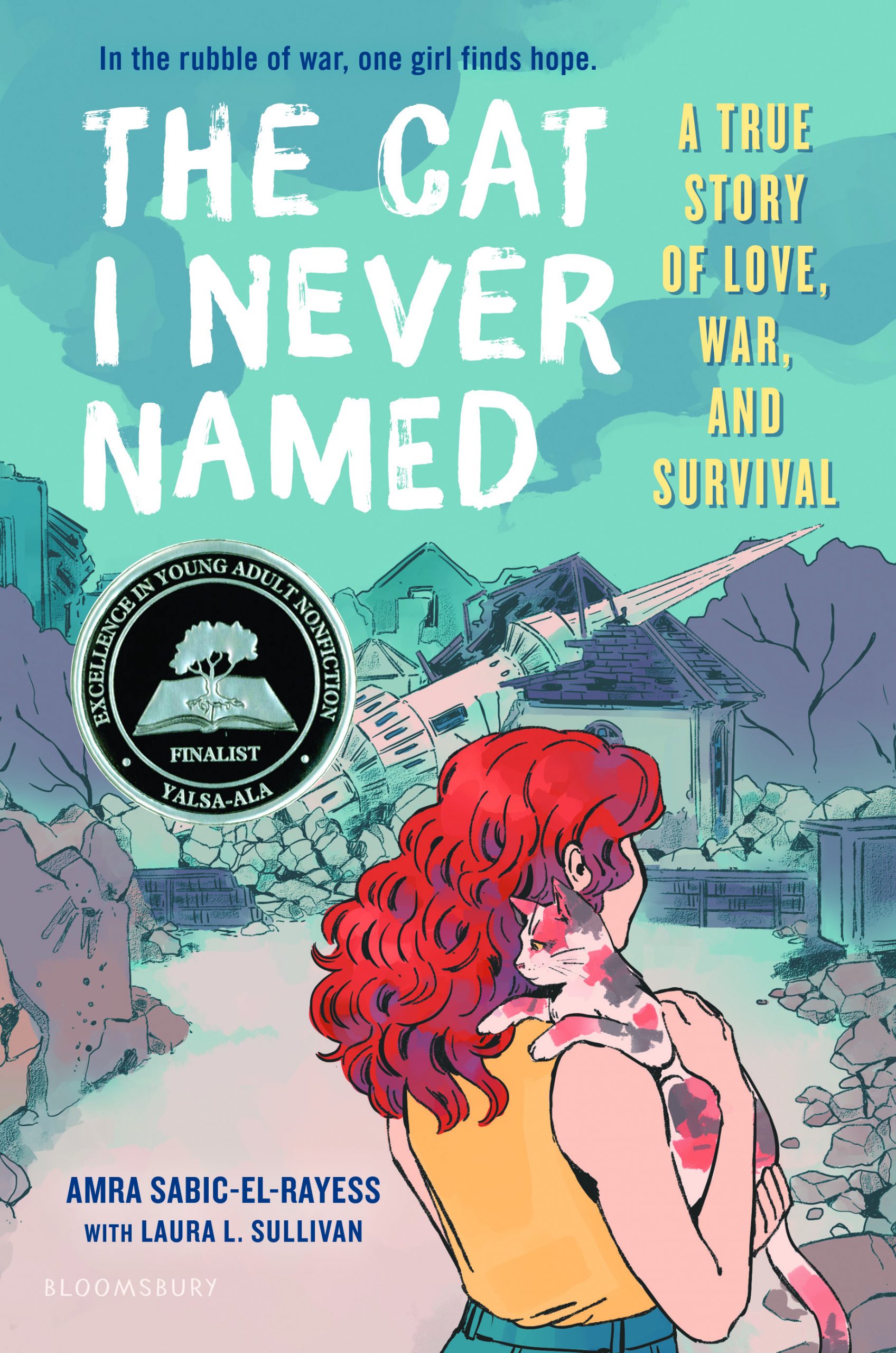 The Cat I Never Named: A True Story of Love, War, and Survival is a true story about my life as a teen who survived genocide in Bosnia and Herzegovina in early 1990s. I was a math nerd who had great friends, played volleyball and was falling in love for the first time when the genocide against Bosnian Muslims started.

As a 16-year-old Muslim girl, I became an instant target, spending the next four years of my life escaping persecution and death.

So the book is an intense page-turner with many surprises, including some incredible experiences like my falling in love in the midst of a war or finding a loyal friend in a cat who saves my life several times.

Growing up in a system that racialized and other-ed Muslims, I never read a story that had a Muslim name in it. Over time, it became clear that this invisibility and exclusion of Muslims in our stories, education and our own language was intentional. Eventually, the invisibility transformed into the narrative of hate targeting Muslims, which ultimately led to the genocide against people like me.

My story is therefore a timely reminder for all Americans where narratives that trigger hate can lead us.

What are you working on next?

I am working on a sequel to The Cat I Never Named, which will capture stories of triumph and failure after my arrival to the United States. Though it will be bookended by tragedy – the Bosnian Genocide at the beginning and 9/11 at the end – it will be a life-affirming story of resilience and love.

What are you doing to get your books noticed?

The Cat I Never Named came out in September of 2020, in the midst of many conversations on racism, hate, exclusion, and violence. So, in many ways, The Cat I Never Named found its own path to readers because of its relevance to this moment in our shared history. Many readers reach out to me saying that they knew nothing about Bosnia and the genocide against Bosnian Muslims but once they started reading my story they were recognizing stark parallels between then and there, and here and now.

What’s been the biggest surprise about the publishing and marketing of your book?

The biggest surprise for me is that I had no idea how much work is involved in promoting the book after it is published. The Cat I Never Named is available worldwide, which coupled with the book’s amazing reception and awards, has led to my constant engagement globally. I have traveled the world (unfortunately all via Zoom and from the same chair in my library!).

I am hopeful that this pandemic will be behind us by the end of this year, so that I can connect in person with people around the world when my next book is out. 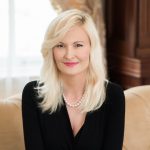 Amra Sabic-El-Rayess is a professor, author and activist who grew up in Bihac, Bosnia and Herzegovina. After surviving ethnic cleansing and 1,150 days under the Serbs’ military siege, she emigrated to the United States in 1996. By December 1999, she earned a BA in Economics from Brown University. Later, she obtained two Masters degrees and a Doctorate from Columbia University. Currently, she is an Associate Professor of Practice at Columbia University’s Graduate School of Education, in the Education Policy and Social Analysis Department. Her scholarship focuses on mechanisms and factors that drive societies towards social disintegration and what role education can play in rebuilding decimated countries.

Amra has worked as an expert on behalf of the US State Department, foreign governments, and other global organizations. She is an interdisciplinary scholar who has taught, researched, published and lectured around the world on education’s links to social transformations, radicalization, corruption, elite formation, and violence. Her recent Al Jazeera op-ed examines the stark parallels between the white supremacy movement in the US and Islamophobia that ignited the genocide in Bosnia.

Her just-published, critically acclaimed memoir, The Cat I Never Named, is a timely warning to Americans against othering, radicalization and hate. Amra’s story is a remarkable journey of humanity, resilience and determination to gain education and counter hate even in the face of the unimaginable.

The Cat I Never Named is a finalist for the 2021 Excellence in Nonfiction Award.

In her students’ feedback, Professor Sabic-El-Rayess is consistently praised as one of the most inspiring professors they have encountered. Amra was recently featured by CBS-NY.

Amra’s story converges with so many of our current cultural touchpoints: racism, tribalism, exploding Islamophobia, anti-immigrant sentiment, radicalization, the rise of hate groups, white supremacy, far-right movement, BLM, civil unrest and social disintegration. Her work inspires us to stay hopeful in a country many no longer recognize.