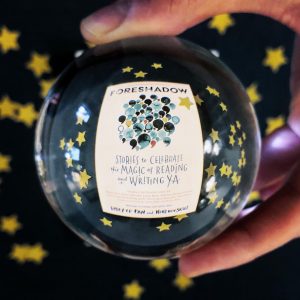 Two of the new voices authors of Foreshadow (Algonquin Young Readers, 2020), Joanna Truman and Flor Salcedo, introduce the anthology and answer questions about the process of answering a call for submissions and getting your work out there when you want to be part of an anthology!

So, You Want to Submit to an Anthology…*insert Captain America gif here*

You open Twitter, ready for another intense session of doom-scrolling, enraging hot takes, and adorable cats and dogs. Then, something catches your eye that you weren’t expecting…a glimmer of hope. A call for submissions. You’re filled with excitement—whoa, I could—which quickly morphs into panic—but what if —then dread—oh god, never mind—and you close your laptop, wistfully imagining a future in which you publish a short story. But today is not that day. Or…is it?!

Pull up a chair, my friend. We’re about to explore the journey of submitting to an anthology. 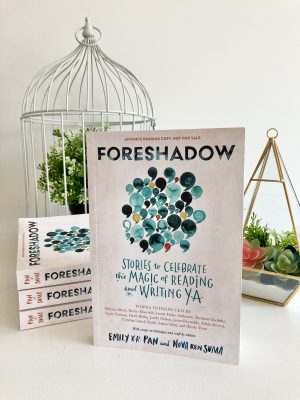 Foreshadow (Algonquin Young Readers, 2020) is a YA short story anthology, featuring work by both established authors as well as first-time writers. The brainchild of Emily X.R. Pan and Nova Ren Suma, it began as a monthly online publication, then made the incredible leap to physical, hold-it-in-your-hands book in October of 2020.

Actually, let’s rewind a tiny bit more. It began as a crowdfunding project to create an online free publication. With it came a call for submissions! It all started with a dream to create a space where marginalized voices could be heard and anyone could access them.

The online publication included works from acclaimed writers. Alongside these was a section called New Voices – stories by up-and-coming writers, hand-picked by some of the biggest names in YA publishing.

These New Voices make up the October anthology release. Yes! Foreshadow: Stories to Celebrate the Magic of Reading and Writing YA, is made up of stories from emerging and underrepresented writers.

Aside from the short reads that run the gamut from fantasy, sci-fi, contemporary, and more, this book also offers essays that discuss craft and technique for every story. There are even author notes on what inspired the stories. All artfully put together by the two editors Pan and Suma. Foreshadow is the first of its kind—and hopefully, not the last! That’s where you come in. 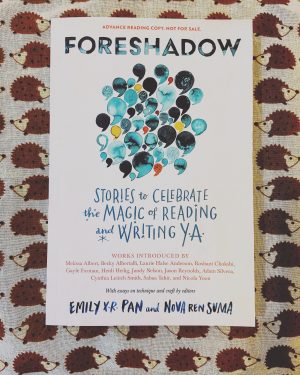 What was your first thought when you saw the Foreshadow call for submissions?

Flor: Many of the other contributors thought up of a story specifically for this anthology (which is ultra cool). But I had a story near and dear to my heart that I’d been trying to publish for a while.

I knew instantly my story, Pan Dulce, was perfect for this type of anthology. So my first thought was, “I have just the story for this!”

I love reading and writing short stories, but every major venue is typically targeted to the adult audience. Finally having a place for young adult stories seemed long overdue. 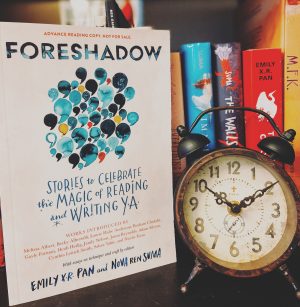 What was the initial spark for your short story idea?(Note: You can read all 13 inspirations for the 13 stories in the book!)

Flor: I have always felt like my hometown of El Paso, Texas has been given a bad rep being a border city next to the violence happening across the border in Juárez, Mexico, even when El Paso has routinely ranked among the top safest cities in the United States. The violence across the border is real and did have some impact on me growing up. But I wanted to show both things. The magic of growing up in this beautiful desert city along with the reality of lurking dangers, all through the lens of teens.

Joanna: I knew immediately that whatever I wrote to submit would be a queer love story. As a queer author myself, I’m keenly aware of the underrepresentation of queer voices in publishing.

In that regard, I also knew it would be an f/f love story, which typically get far less attention and hype than m/m stories. As a part of many queer f/f fandoms over the years, I feel the deep hunger to see our stories represented in media, and how much it means to us when they are done right. So I was extremely excited to be part of contributing to that.

How long did you spend writing and revising your story before submitting it?

Flor: Uff. Well I wrote this story three years before it was accepted into Foreshadow. I would slowly submit it here and there to literary magazines and journals. On more than one occasion, I received feedback saying that they couldn’t connect with my characters. I refused to let this story go and kept working on it and improving it.

Joanna: I spent several months working on the story and revising it, with long stretches of not-writing in-between. Developing a more consistent writing habit is something I’m always working on, but the demands of life and work and all of those fun things often means I tend to work in bursts rather than consistently. I’m pretty sure I also submitted as close to the deadline as I possibly could.

What makes submitting to a specific anthology different from submitting short stories to various literary magazines?

Flor: Having a common theme or want as anthologies do, is super helpful. When I was submitting to other literary magazines, I often felt like I didn’t really know what they were looking for. Foreshadow specifically asked for YA and for marginalized and diverse voices. This helped made my decision to submit an easy one.

Joanna: Having a specific target in mind really does help narrow your focus. Sometimes it’s difficult to simply write a short story without knowing where it’s going to go – what if it ends up too long for certain magazines and too short for others? What if certain venues aren’t open when you’re ready to submit? What magazine do you submit to first? But when you find an anthology, you can focus on one specific set of requirements and exactly what kind of story they are looking for.

What advice would you give to a writer who has never submitted something for publication before?

Flor: You’ll never know unless you take a leap. I had been told “no” a lot for this story. This call for submission renewed my energy on this story and I really wanted it to be picked, so I went back to work on it hard. I was blown away when the Foreshadow staff and Jason Reynolds picked my story!

Joanna: Remember that all of your favorite authors have been rejected. Yes, even that one. And not only rejected once, but multiple times. That’s the way it goes when it comes to creative fields like publishing, where so much is out of your control. All you can control is the work itself.

Also, follow the submission guidelines exactly. Give yourself the best possible chance to get picked. The first submissions thrown out are the ones that don’t follow the guidelines.

Last thing: after you submit, eat cookies! This is optional, but very important. 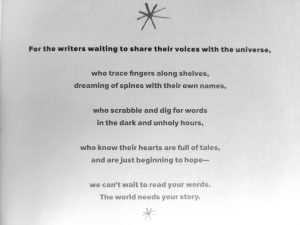 Why is it important to keep finding and boosting new voices, perspectives, and stories in YA lit?

Flor: Being exposed to new perspectives and understanding where other people come from helps us have empathy toward others which is urgently needed in this world of today. If books have only one type of people, one type of customs, it’s not helping us be more open to what we’re not used to. All genres, including YA, can benefit from more perspectives.

It is said that anthologies can be exclusionary. I believe this can be the case, and not having the right connections has left many new writers frustrated. However, if more anthologies look to boost new voices and perspectives, it can only help.

Joanna: What Flor said. So many people today don’t have empathy for others’ situations because they think that situation could never happen to them. And whether or not that’s true, depending on the situation, stories and books are a huge way to help people see what it might be like if they had less privilege, less power, less help in this world. Stories have an effect. Stories can create change. Stories are one of our greatest tools to fight against discrimination of any kind, and to do that, we need to hear stories from everyone.

Now for you, reader…

From Joanna, Flor, and all the contributors for this anthology: Keep pushing your short stories. Your unique voice and perspective matter, and we can’t wait to read what you come up with. 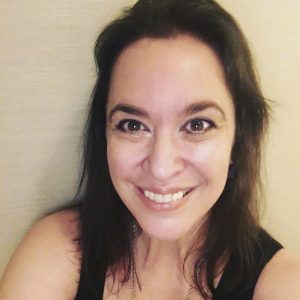 Cynthia Leitich Smith was one of the guest authors for the anthology, and she selected the short story titled “Princess” by Maya Prasad for one of Foreshadow’s online issues. 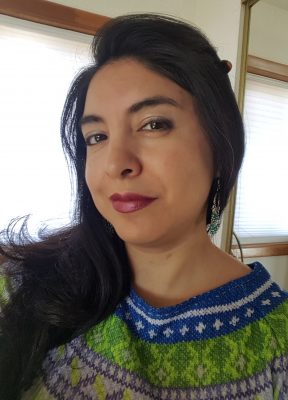 Flor Salcedo was born and raised in the border town of El Paso, Texas. She currently resides in Austin, Texas with her husband and five cats. She has always been fascinated with anything tech and as a result, gravitated toward software which she’s been programming for over a decade. When she isn’t doing writerly or programmer things, she is curling up with her cats and catching up on sleep, dreaming of the day she can become a full-time writer. Find Flor on Twitter: @FlorSPower 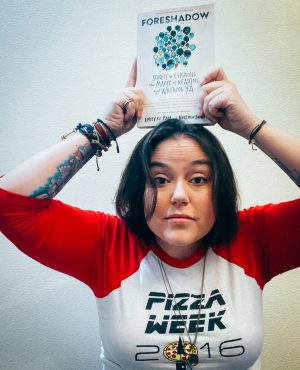 Joanna Truman is a writer, filmmaker, and photographer based in Los Angeles. She holds a BFA in Film Production from the FSU College of Motion Picture Arts and is the creative director at Soapbox Films, where she was a writer on season one of “Muppets Now” on Disney Plus. She has published speculative fiction in Apex Magazine and Luna Station Quarterly and has been featured in the nationally broadcast NPR program To the Best of Our Knowledge. She also enjoys streaming video games and various shenanigans on Twitch. Find Joanna online at joannatruman.com, on Twitch @nimblefizz, and on Twitter and Instagram: @joannatruman. 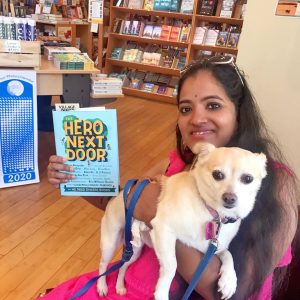 Suma Subramaniam is the contributing author of The Hero Next Door (Penguin Random House, 2019). She is also the author of Centaurs (Capstone, 2021), Fairies (Capstone, 2021), She Sang For India: How M.S. Subbulakshmi Used Her Voice For Change (Macmillan FSG, 2022), and Namaste Is A Greeting (Candlewick, 2022). She is the chair of the Children’s Internship Grant Committee at We Need Diverse Books and Mentorship Program Coordinator for SCBWI Western Washington. She hires tech professionals for a leading software company during the day and is a writer by night. Suma has an MFA in Creative Writing from Vermont College of Fine Arts and degrees in computer science and management. Visit her website at https://sumasubramaniam.com.