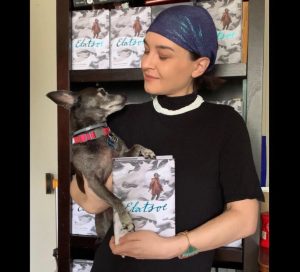 Darcie Little Badger is the debut author of Elatsoe (Levine Querido, 2020). From the promotional copy:

Imagine an America very similar to our own. It’s got homework, best friends, and pistachio ice cream. There are some differences. This America has been shaped dramatically by the magic, monsters, knowledge, and legends of its peoples, those Indigenous and those not. Some of these forces are charmingly everyday, like the ability to make an orb of light appear or travel across the world through rings of fungi. But other forces are less charming and should never see the light of day.

Seventeen-year-old Elatsoe (“Ellie” for short) lives in this slightly stranger America. She can raise the ghosts of dead animals, a skill passed down through generations of her Lipan Apache family. Her beloved cousin has just been murdered, in a town that wants no prying eyes. But she is going to do more than pry. The picture-perfect façade of Willowbee masks gruesome secrets, and she will rely on her wits, skills, and friends to tear off the mask and protect her family.

Congratulations on the release and early success of Elatsoe (Levine Querido, 2020)! Could you please tell us a little about your big-picture creative apprenticeship and path to publication—any leaps forward, stumbles or ah-ha! moments along the way?

I often say that I’ve wanted to be a writer longer than I’ve known how to write. Toddler Darcie would craft books from construction paper, using crayons to scribble loops and lines, mimics of the symbols I observed in picture books. One of the first words I learned to spell was “love;” for a couple months, my books were nothing but “love” repeated on page after rainbow page.

Thirty years later, love is still a pervasive element in my stories.

My father, who was a professor of English and writing, was the biggest champion of my creative dreams. It’s impossible to overstate the positive impact he made in my life. I discuss Dad in the acknowledgements section of Elatsoe:

“I wrote a ‘novel’ when I was in first grade. It was a forty-page mystery about a girl who found a box of opals and a riddle in her attic. I only remember fragments of the plot. Somebody was poisoning a butterfly garden in the neighborhood park, and the protagonist cracked the case (don’t ask me how; it was related to the opals…maybe).

“So there I was, a seven-year-old author with a finished manuscript. I gave it to the only beta readers I knew: my parents. Luckily, my dad, an English/writing professor with a strong background in Shakespearean lit, not only read the book (and praised my writing!), he edited all forty pages.

“Keep in mind that we were still learning the alphabet in my homeroom class. To put it lightly, I didn’t have the strongest grasp of English grammar.

“Dad explained his edits, and I corrected my manuscript on a nineties-era computer that was good for two things: typing and Tetris. Then Dad taught me how to write a query letter (gotta be succinct and polite!), and I sent my manuscript to a real book publisher.

“You can probably guess their response. I still have the rejection letter. Dad framed it, proud of my persistence and big dreams. Proud of me. He figured I could hang it alongside my first acceptance letter as a reminder of my journey.

“When it comes to my writing, Dad has always been my biggest teacher, supporter, and advocate. This book wouldn’t exist without a lifetime of his guidance.”

The path to publication has not always been easy. As a high school student, I dreamed of studying English and writing (like my father). So when I was accepted to Princeton with an excellent need-based financial aid package…well, to put it lightly, I was elated. My first year at Princeton, I sent an application to the creative writing program. If they accepted me, I could earn a certificate and write a book for my senior thesis!

The news stung, but you gotta be persistent. The next semester, I sent another application.

Again, I was rejected.

That’s when I realized I’d run out of chances to focus on writing academically. It was too late to get the certificate, though I could still someday take a writing course.

No worries. Instead of studying a subject I was not passionate about, I switched my major from English to geosciences and researched a new love in my life: the ocean.

But in my free time, I continued to write science fiction, fantasy, and horror. Throughout college, I sent short stories to the slush piles of my favorite magazines, collecting rejections and honing my craft by reading voraciously. The rejections kept coming.

Strange Horizons was the first venue to pay me pro rates for a short story. That was about six years ago. Since then, I’ve earned a PhD in oceanography, assembled several plankton transcriptomes, worked as a scientific editor, published more short stories, comics, and nonfiction, and—finally—published my debut book with Levine Querido. It’s been an adventure, and I’m grateful for every person who has helped me along the way.

What was the initial inspiration for Elatsoe? What were the challenges—emotional, logistical, creative—and pleasures of bringing it from initial spark to finished book? 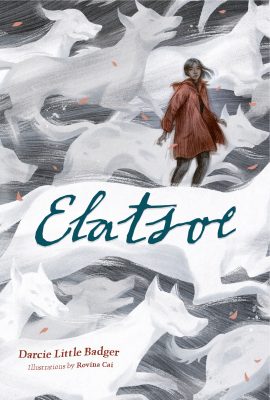 Elatsoe started with a question: How cool would it be if ghost animals roamed the earth? If somebody could teach their ghost dog supernatural tricks? The world of Elatsoe grew around my daydreams about those questions. But it’s also inspired by my desire to tell a story about a nerdy Indigenous teen who fights for justice in an often dangerous and unjust world. Many elements of the book were informed by my life or the lives of my family (for example, Ellie’s Kirby is based on my first dog, the gentlest, sweetest little guy; he knew tons of tricks, too!).

Elatsoe debuted in late August, and I’m already overwhelmed (in a good way) by the positive feedback from readers of all ages (P.S.: To everyone who has shared a picture of Elatsoe with their pets or in their house or outside or surrounded by flowers or in a bookshelf or chilling with other books…thank you!!). That’s been the greatest part of finishing a book. Knowing that people are reading and enjoying Elatsoe is a joy.

What advice do you have for those hard-working writers who’re not yet published? How about for those from traditionally underrepresented or marginalized communities in the conversation of books?

Rejection is often a big part of a writer’s journey (as I mentioned earlier, before publishing my first story, I was rejected by the Princeton creative writing program—twice—as well as the slush piles of my favorite magazines, and there have been many more rejections since 2014!) Most magazines, anthologies, agents, editors, etc., get a flood of submissions. A rejection does not mean you’re a failure. Often, it means the match wasn’t right. Keep submitting. Keep writing new stories. Then submit those, too.

I don’t want to pretend that the playing field is even for all writers, though. It’s not. Publishing has a long way to go. That said, here are some things that have helped me. First, I hang out with virtual communities of other LGBTQI+ and/or BIPOC writers. The groups have been lifesavers, both personally and professionally. We lift each other up. Second? Even within small communities, everybody has different journeys, and it’s best not to harshly compare yourself with another writer. Instead, focus on writing the stories that make you happy. We need them.

What do you do when you’re not wearing your writer’s hat? What give you joy?

Before this pandemic, I loved visiting arcades with my fiancé. We’d play for hours. I can’t wait to do that again.

Also, I’m a big fan of watching horror movies (especially well-made “found footage” stuff), listening to creepy podcasts, and reading scary books. Creatively, beading is my jam. I’m slowly amassing a collection of beaded superhero logo rosettes (and when I say slowly, I mean slowly, since each one takes 15 or more hours, depending on the bead size). Also, selfies in impractically big platform shoes are lots of fun. I can’t wear high heels or any shoe with a slope, but I’m able to dance around in six-inch platform sneakers. Haven’t twisted an ankle yet! Must be all my childhood gymnastics training on the balance beam.

Darcie Little Badger is a Lipan Apache writer with a PhD in oceanography. Her debut novel, Elatsoe, is both a New England Book Award finalist (young adult category) and a BookExpo 2020 Young Adult Buzz Finalist. Darcie is writing a Dani Moonstar story for ‘Marvel’s Voices: Indigenous Voices’ #1 and co-wrote Strangelands, a comic series in the Humanoids H1 universe.

Her short fiction, nonfiction and comics have appeared in multiple places, including Nightmare Magazine, Strange Horizons, and The Dark.

She currently lives on both coasts of the United States and is engaged to a veterinarian named T.