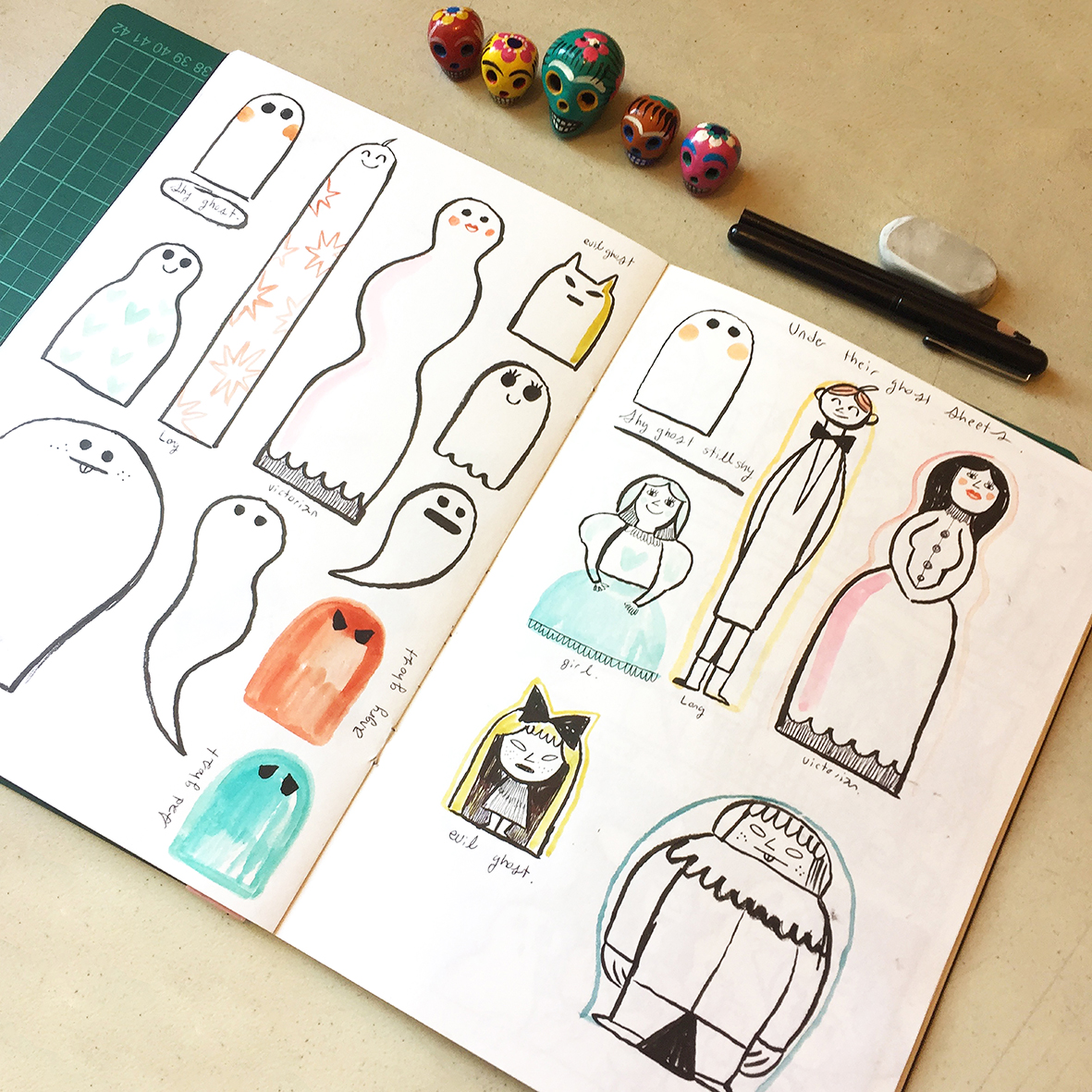 Today we welcome author-illustrators Flavia Z. Drago (whose sketchbook is pictured above) and Nicola Killen, who highlight the importance of having lots of ideas as creators of children’s books. They’ll share the inspirations behind their recent works, Gustavo the Shy Ghost (Candlewick, 2020) and The Little Kitten (Simon & Schuster, 2020), just in time for Day of the Dead and Halloween!

What was your initial inspiration for Gustavo the Shy Ghost? 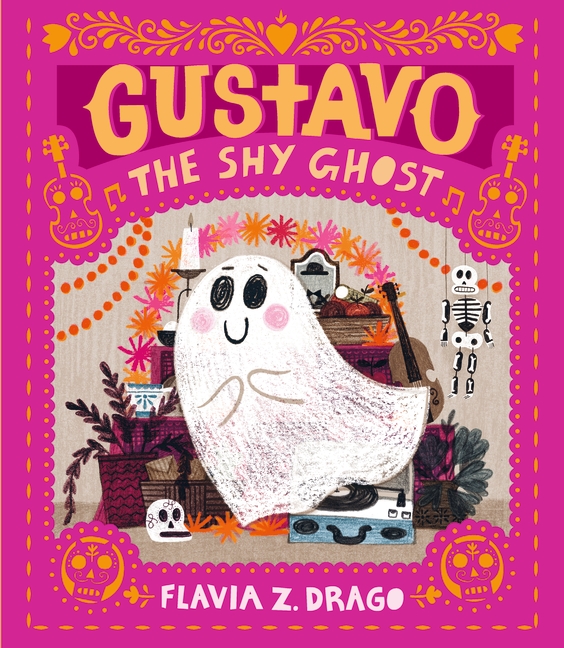 When I was a child, I was as shy as Gustavo is. In kindergarten, during lunch breaks and parties, I would sit and wonder how other children could talk and play with one another so easily.

Being a shy person doesn’t mean that you don’t enjoy the company of others; it just means that you find it difficult to reach out to them, especially the first time.

The idea for the story came from a tweet I wrote in 2016 when I was thinking about the reason behind ghosts wearing sheets. It must be because they are shy, I thought, and so the idea for a picture book was planted in my head.

When I first started working, I wasn’t sure if I wanted Gustavo to be a boy disguised as a ghost who in the end takes off his sheet to show the others who he really is, or if Gustavo was going to be an actual ghost living in a world full of monsters.

However, as soon as I started sketching, I discovered that as a real ghost, Gustavo could do all sorts of fun stuff, like walking through walls, making objects fly, and glowing in the dark. Also, as a ghost he was able to shape-shift into different forms, which really helped the story development, and in the end, he shows his true self to the others anyway. 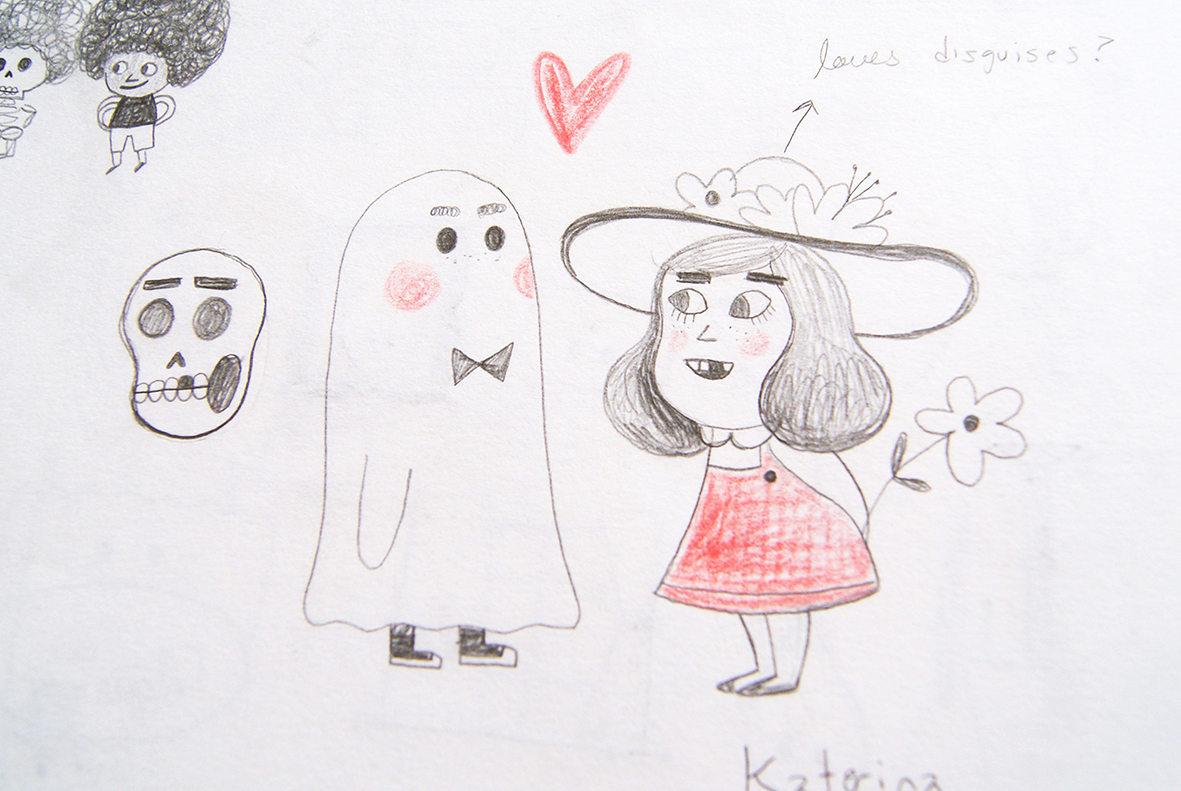 For the artwork, I used a lot of personal photos as reference. Gustavo’s house is based on an abandoned house in my neighborhood. Most of the interiors and the cemetery are based on pictures that I took in Oaxaca. 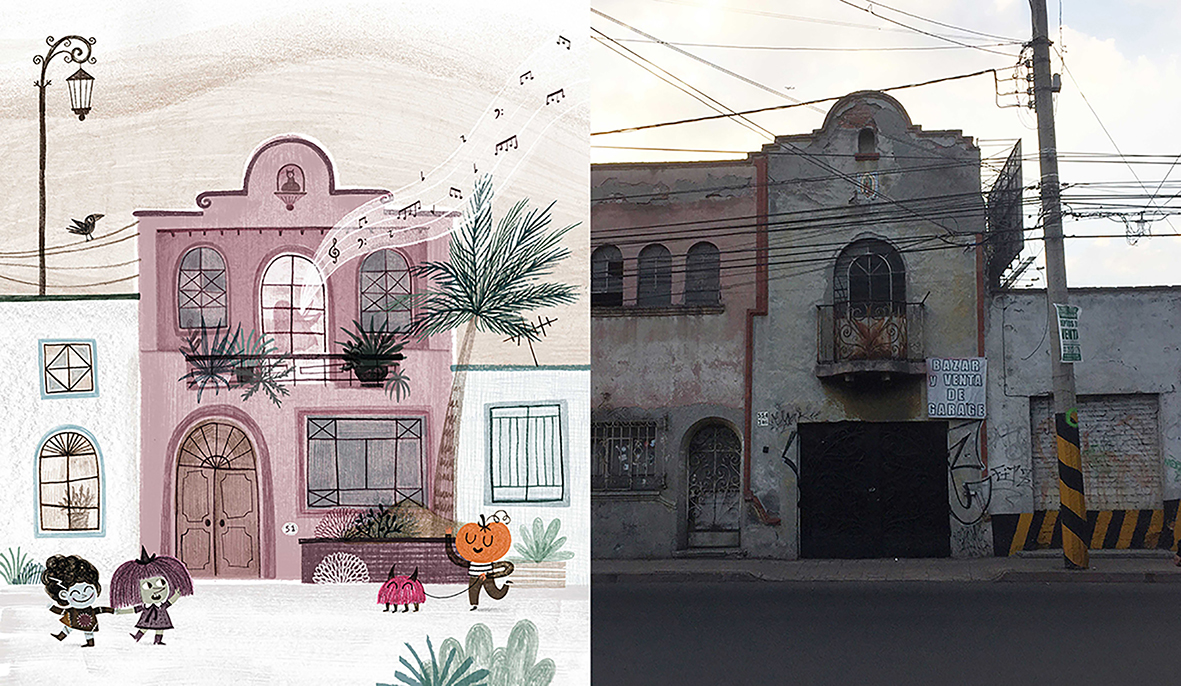 The first spread is based on my grandma’s house and furniture. The piano that Gustavo’s dad is playing belongs to an uncle. In the graveyard, you can find the names of my grandparents in the tombstones. 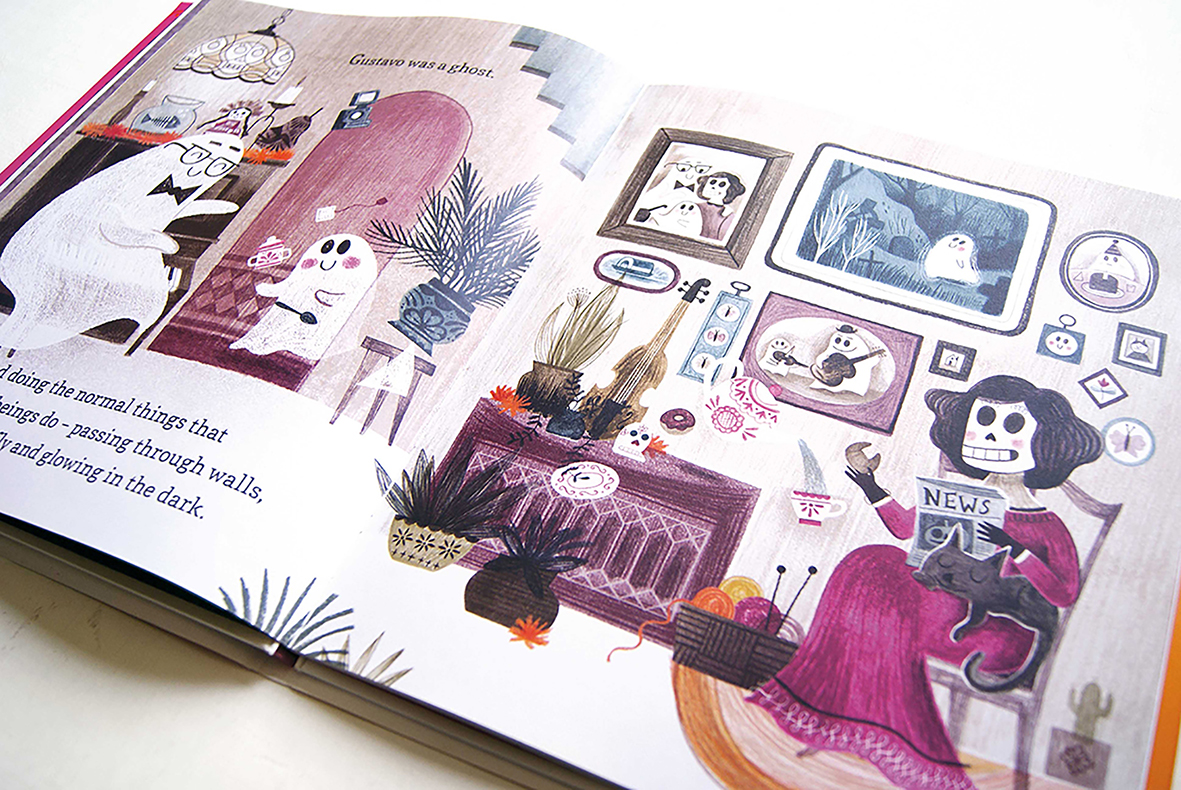 In Gustavo’s room, you can see replicas of my own childhood drawings. Throughout the book, I have left a lot of references to music, art, horror cinema, and literature. I hope that my readers will notice some of them.

Once I figured out the story, I experimented with different color palettes and materials, like watercolors, gouache, ink, and pencil. For the final artwork, I created black-and-white layers of pencil and ink and then colored the images using Photoshop. 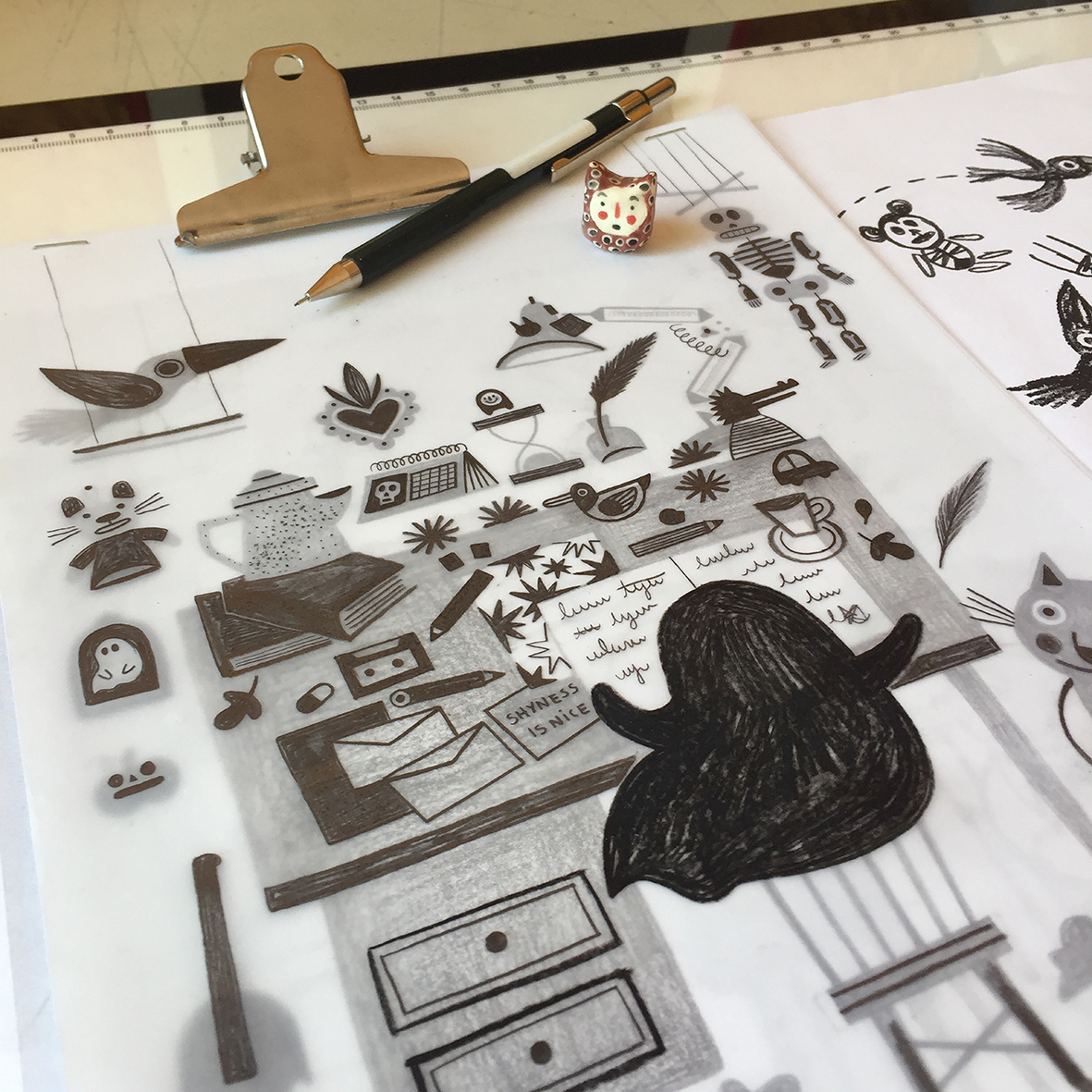 What were the challenges (artistic, literary, research, psychological, logistical) in bringing the story to life? 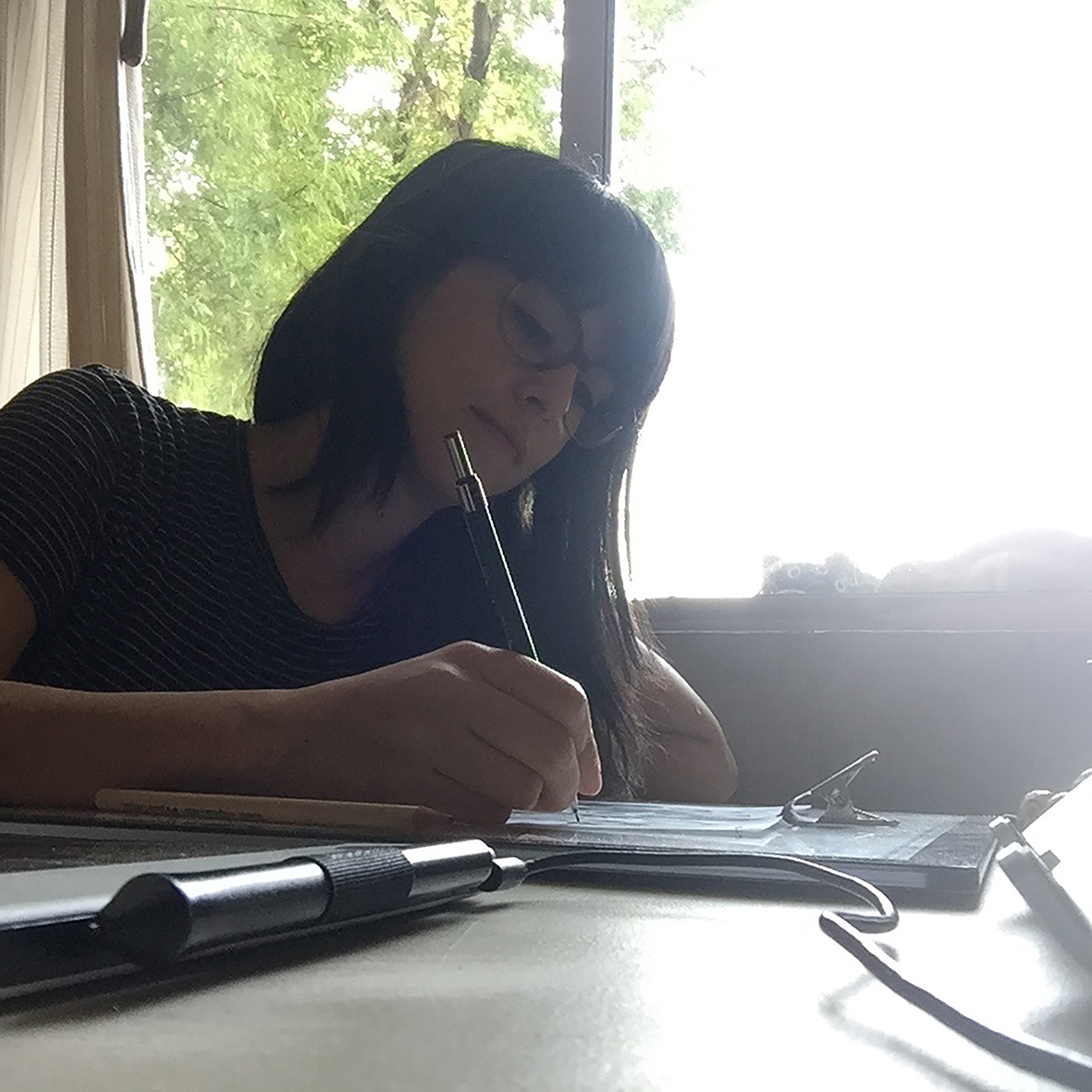 The good news is that usually the more I draw and write and the more I get to know my character, the easier it is for the story to take shape.

Another difficulty is to build a meaningful story in a few pages. I think that creativity is not about having just good ideas, but rather having a lot of ideas and choosing the ones that work the best. Sometimes that means leaving out fun stuff because there isn’t enough space. 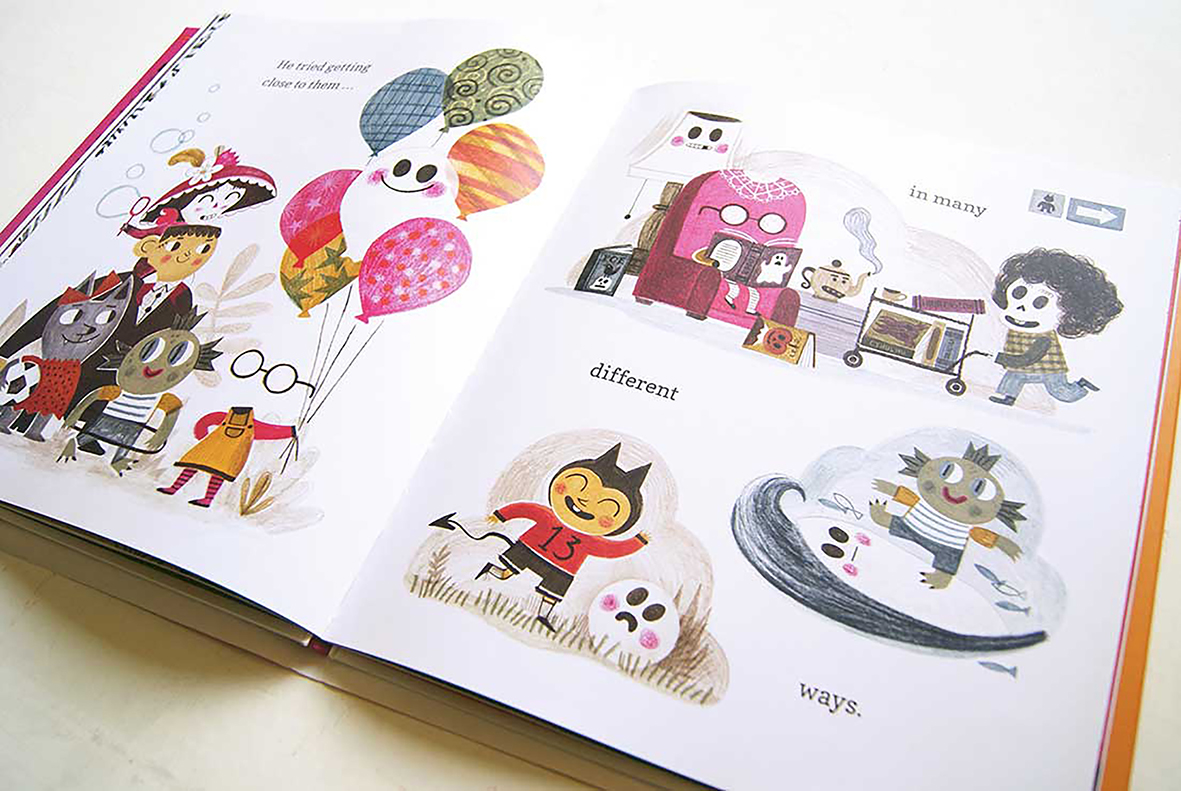 I usually have a lot of fun when writing a book, but the concern about creating something that I will be proud of is always there, and it can be very easy to lose perspective. Luckily, I have a wonderful team of editors and designers always helping me out.

As a member of a community under-represented in youth literature, what did your perspective bring to your story?

When my publishers suggested that the story could take place during the Day of the Dead I was over the moon, because I never imagined that someone would be interested in portraying this particular tradition.

While my story is not about the Day of the Dead itself, it brings the opportunity for other people to get acquainted with the celebration and with Mexican aesthetics and references. I love the fact that publishers are slowly opening to the idea of including new voices in the publishing industry.

As a Mexican, the Day of the Dead has always been my favorite tradition. But Halloween was also an important part of my childhood, and foreign horror movies and monsters have always been a huge inspiration. This is why both worlds happily coexist in my book.

I like acknowledging that there are many amazing traditions around the world and that each one of them is important. For me, diversity means portraying different cultures and individuals in an authentic way. It helps us to re-evaluate and appreciate the uniqueness of who we are, how we look, where we come from, and what we believe in.

What was your initial inspiration for The Little Kitten? 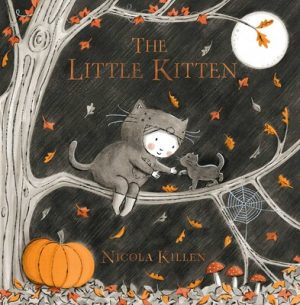 The Little Kitten (Simon & Schuster, 2020) is the third book featuring Ollie, a little girl with an adventurous spirit, a love of nature and lots of imagination. She first appeared in The Little Reindeer (Simon & Schuster, 2017) and was originally inspired by my best friend’s daughters, who had been trying on their new reindeer onesies when I was visiting in the run up to Christmas.

They were so excited and looked so cute, I made a sketch of them when I got home, and used this sketch to make their Christmas card that year!

A few months later, I was experimenting with painting in black and white using ink, and seeing the Christmas card design pinned on my wall, started painting a reindeer girl. I gave some samples of these black and white paintings to my agent Elizabeth Roy and she received a very positive response.

I started to work on a short board book based on the character, but after discussions with my publishers, Simon & Schuster, this gradually grew into a picture book with die-cut windows and foil!

I was really excited to work on an autumnal book as it’s such a beautiful season, and I felt that the black and white colour palette, this time with added touches of orange and copper foil highlights, would create the right atmosphere.

I was very lucky that I started working on the book at the beginning of autumn, so I visited a couple of parks near Cambridge to draw trees and leaves on the ground. 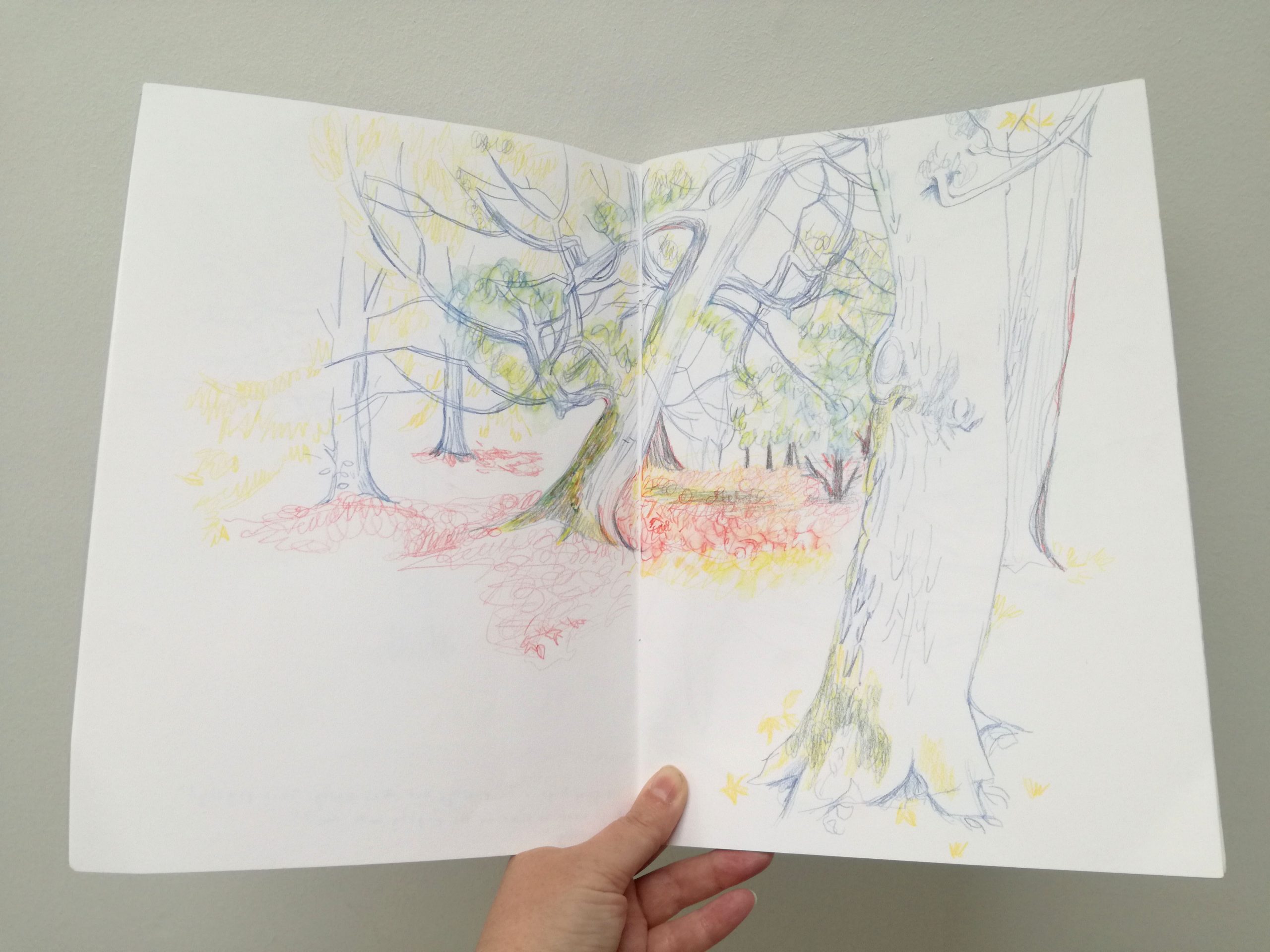 One of them even had a display of pumpkin and squash in their glasshouse which was very helpful! And with a nod to Halloween, it seemed an obvious choice to have Ollie dressed as a black cat. 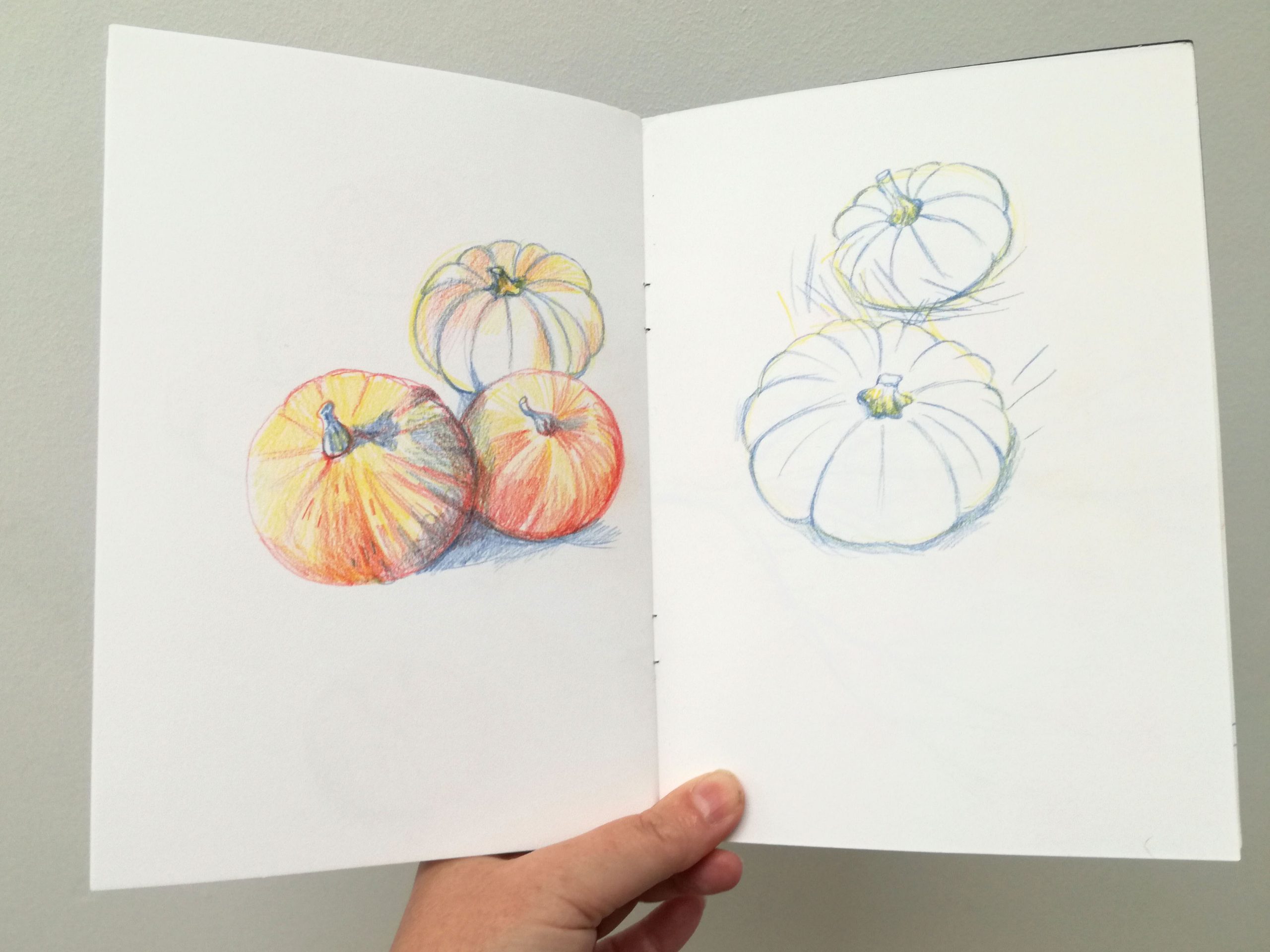 Please describe your pre-publication craft apprenticeship. How did you take your writing and art from a beginner level to publishable? 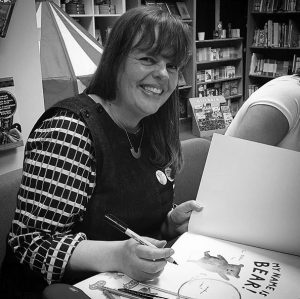 I worked as a greetings card designer/illustrator for several years, firstly freelancing and then working in-house. During this time I was becoming more and more interested in children’s books and was building up quite a collection of picture books that I loved!

While browsing in one of my favourite bookshops, I found Illustrating Children’s Books by Martin Salisbury (A&C Black, 2004) and reading this really got me excited about the possibility of working in publishing.

Martin Salisbury had not only written this book, he was the course leader of an M.A. in Children’s Book Illustration at Cambridge School of Art here in the UK, so I started to research the course and visited the degree show to see if it was something that was right for me. 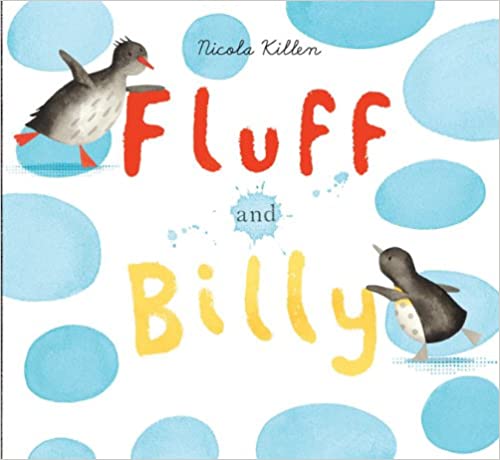 I decided to apply, so spent the next few months building up a portfolio of work – interestingly at the interview it was the sketchbooks with lots of rough drawings inside that seemed to grab their attention rather than the more finished pieces.

I was very excited to be accepted, and also lucky that my employers allowed me to work freelance for them while I was studying.

The initial focus of the course was on drawing. By continually sketching and trying out different materials, it really helped free me up from the more commercial ways of working I’d been used to, and to find my own visual language. The next project involved developing sequential images without words, and only after that were we encouraged to try writing our own stories.

It was great being able to discuss ideas with the tutors on the course, and the rest of the class were brilliant at giving honest feedback. I was also given permission to draw at the university nursery – it was an amazing opportunity to see how this group of children interacted with each other, and they inspired several story ideas, including Fluff and Billy (Sterling, 2012).

What advice do you have for beginning children’s-YA writers and illustrators? 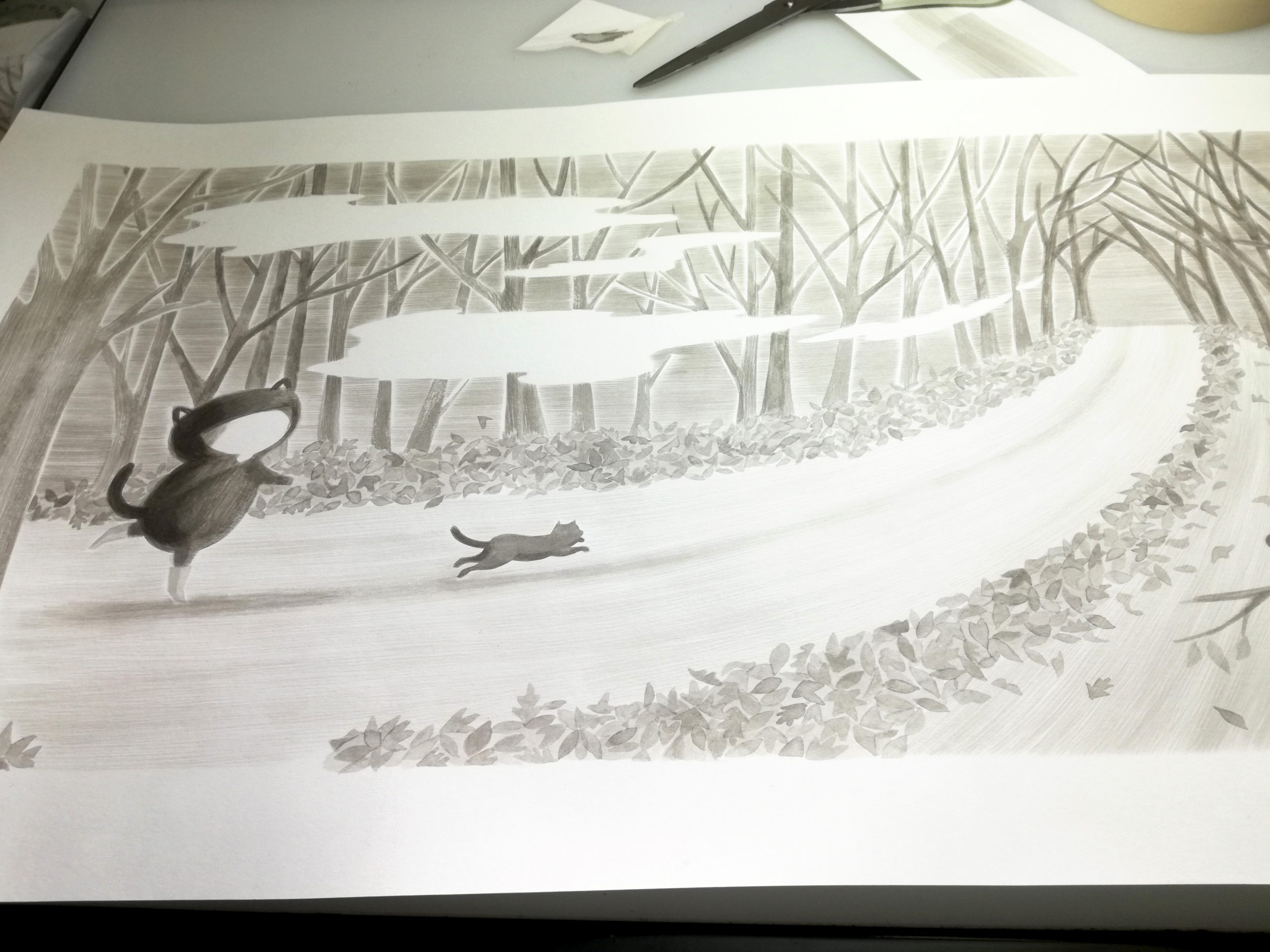 Keep practising and developing your work as much as you can. Some of my story ideas have come from characters I’ve painted when I’ve been experimenting or playing around with different materials – and I often do this on days when nothing else is working!

Other ideas have started with words, or a simple idea about the way children behave in certain situations, so it’s always good to observe what’s going on around you. If I’m struggling to resolve a piece of writing I find it really helps to take a break, do something else or go for a walk – these are the times when the answers seem to appear!

Although some of my work has been published, there are many, many more ideas and stories which have never made it into print! Sometimes an idea that seems like the best one ever when it’s whizzing around inside your head just doesn’t work when you put it down on paper, so it’s important to try as soon as you can. And sometimes you just haven’t shown your idea to the right person at the right time. One publisher might already be developing a story about sharing (for instance), but it may be just what another publisher is looking for! 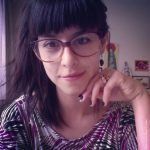 Flavia Z. Drago was born and raised in Mexico City. As a child, she wanted to be a mermaid. When that didn’t happen, she began her career as a graphic designer and a children’s book illustrator. She loves color, textures, and shapes and enjoys creating them with different materials and a bit of digital sorcery. She lives in Mexico.

Nicola Killen has always loved drawing and still likes nothing better than taking her sketchbook out and about to draw all her favorite things: animals, trees and ceramic figurines included! 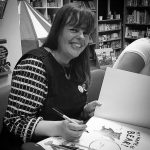 She designed cards before starting an MA in children’s book illustration at Cambridge School of Art, and since then she has been working on her own books, including The Little Reindeer, which was called “an original and entertaining Christmas story with its own understated charm” in a starred review by Kirkus Reviews and “magical” by Publishers Weekly. The Little Reindeer was named a Horn Book Holiday High Note. Nicola Killen lives and works in Cambridge, England.