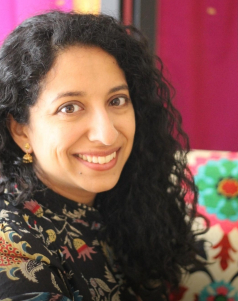 Her picture book, The Many Colors of Harpreet Singh, illustrated by Alea Marley (Sterling, 2019), was named to the ALA’s Notable List for 2020 and her newest title, American as Paneer Pie is due out from Aladdin in June.

Congratulations on American as Paneer Pie! Can you share the inspiration behind the book?

Thank you! I wrote the first draft of the book in 2017 when I felt overwhelmed by how emboldened hate was. It made me think back to how things were for me when I was growing up in a small town in Michigan that didn’t value diversity, and how little had changed in the decades since.

I felt sick thinking about how my young children were going to be facing the same things I did. From all that fear and sadness, the seeds of this story full of heart and hope and the power of speaking out against hate were sown.

American as Paneer Pie is your third published book for young readers, following the middle grade historical novel, Ahimsa, and the picture book, The Many Colors of Harpreet Singh. Tell us about the creation timeline. Did you write them in the order they published, or were you working on more than one while promoting your debut?

I did write them in the order of their publication, but the first draft of Ahimsa was written more than a decade before I wrote The Many Colors of Harpreet Singh and American as Paneer Pie!

How has your writing evolved over time?

One of the biggest things I noticed when I looked back at my writing from when I was growing up is that I almost never wrote about characters that looked like me. There were no specifics that identified them as Indian-American, and more often than not, the characters I wrote about were white girls. Growing up in the 1980s and 1990s, I never saw anyone who looked like me in American books, TV shows, or movies and thought my story wasn’t important.

It wasn’t until I was in college that I really started putting details specific to my culture in my writing.

Around the time I first wrote Ahimsa, I queried several of those stories, but there wasn’t any interest in them, so I again thought maybe no one cared to hear my story.

It wasn’t until years later, when Ahimsa won the New Visions Award and was going to be published, that I realized I could tell my story and it was important.

When I first got the idea for American as Paneer Pie, it was strange to me how quickly I was able to write the first draft.

I think it’s because the story was so personal and I felt it so deeply, unlike those stories I would write as a child that just weren’t about me.

Has connecting with young readers through your first book affected how you approach stories?

Connecting with young readers has really pushed me to challenge stereotypes when I write. I know how important diverse stories are as windows and mirrors and sliding glass doors, as Dr. Rudine Sims Bishop put it.

I feel it deeply when I connect with readers at school visits. I know what it would have meant to me when I was younger, to see an Indian-American author or to read a book with someone who looks like me. So, I try to make my characters well-rounded and real and full of heart so that their stories can serve as mirrors and sliding glass doors for all readers.

What are you doing to get your books noticed? Are there strategies you’ve changed since Ahimsa debuted?

I generally get the word out about my books on Twitter and Instagram and through connections I’ve made with all the amazing educators on book Twitter.

I’m also lucky to be a part of such a supportive kidlit community that is always willing to help spread the word about each other’s books.

As for how things have changed since my debut year, I think I’m better at adapting now than in 2017, when I was still learning so much about what it takes to get your books noticed.

I was momentarily thrown in March when I realized my book events would need to change to virtual ones for American as Paneer Pie with everyone having to do their part to flatten the curve.

But I know I can still get word out about the book and make sure it reaches readers. I just have to adapt and change my plans.

So, now instead of thinking about what I need to do for an in-person launch, I’m working on some fun ideas for the virtual launch that parents and kids and readers who are practicing social distancing can all enjoy, including a Bollywood cardio dance to kick off the event!

I would say to keep in mind that both sides of the job—being a writer in your own work space, and being an author who has to help spread the word about the book in public and on social media while making connections with readers—are equally important.

I think if you understand both of these roles are part of the job, it makes it easier. I know understanding the importance of both roles helped me gain so much joy and gratitude in making those connections with readers at school visits and book events.

Born and raised in the Midwest, Supriya  Kelkar learned Hindi as a child by watching three Hindi movies a week.

She is a screenwriter who has worked on the writing teams for several Hindi films and one Hollywood feature. Supriya’s books include Ahimsa, The Many Colors of Harpreet Singh, and American as Paneer Pie, among others.

Gayleen Rabakukk holds an MFA in Writing for Children and Young Adults from Vermont College and is a former Writing Barn Fellow. She’s worked with Cynthia Leitich Smith as  Cynsations intern since 2016 and also serves as assistant regional advisor for Austin SCBWI. Gayleen is represented by Andrea Cascardi of Transatlantic Literary Agency.