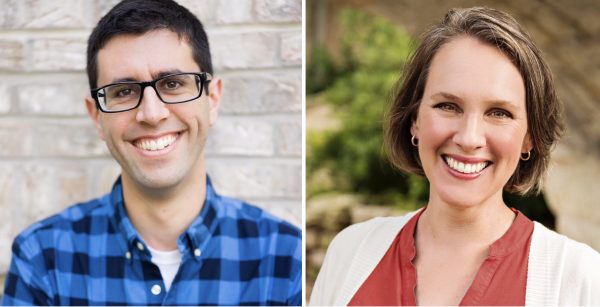 Today I am excited to introduce you to Joshua S. Levy and Karla Manternach, two middle grade authors whose debut novels surprised some of their friends. Joshua is the author of Seventh Grade Vs. The Galaxy (Carolrhoda, 2019) and Karla is the author of Meena Meets her Match illustrated by Rayner Alencar (Simon & Schuster, 2019). 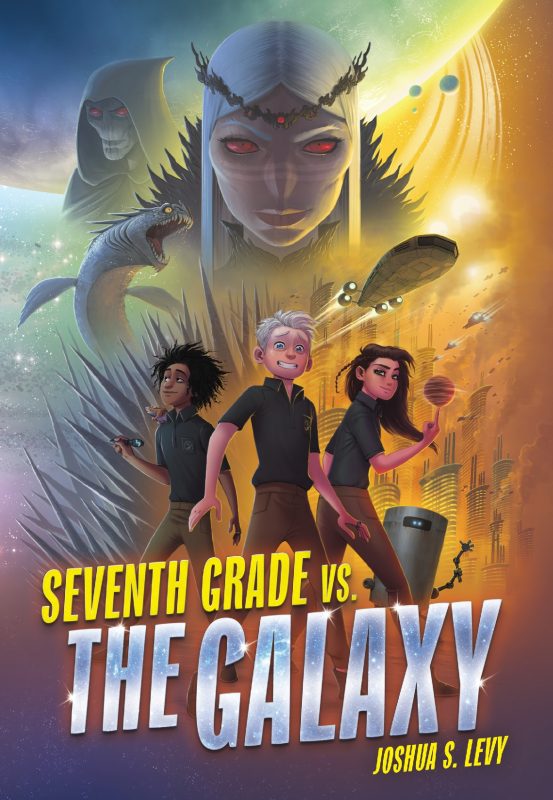 I’m a lawyer now—but was a middle school teacher before going to law school. I’ve always wanted to put fiction out into the world. At some point, during my stint in the classroom, I just thought to myself: What would they enjoy reading? What would I have wanted to read as a kid?

Some combination of the answers to those questions led me to Seventh Grade Vs. The Galaxy (Carolrhoda, 2019). I wanted to write something fun. I also wanted to write something that at least evoked some of my absolute favorite stories as a kid, most of which revolved around space-based sci-fi/fantasy: “Star Wars;” “Star Trek;” Hitchhiker’s Guide to the Galaxy (Pan Macmillan, 1979).

And I thought: What better way to acquaint kids with science fiction than to set the story in actual, pretty-familiar-to-kids-today-school . . . that just happens to be in space.

What an interesting question. Truth is, they were pretty surprised. Much to my current self’s chagrin, I kept my writing dreams mostly quiet. I didn’t engage with kidlit Twitter. I didn’t have some larger critique group.

Aside from a few very close friends (and my wife), no one knew that this was something I wanted to do. And then…the Publisher’s Weekly announcement hit, and I got all sorts of questions: Why didn’t you tell me?! Are you still a lawyer?! Wait…kids in space?!

People both within and outside of the kidlit community have been mostly supportive. But—especially in some of my non-kidlit spaces—there’s still a bit of a disconnect there.

But that’s fine, to be honest. Not everyone needs to fully understand everything. And I’m comfortable and happy keeping my various worlds mostly compartmentalized.

What advice do you have for beginning children’s-YA writers? What would you have done differently?

The thing I most wish I’d done differently is the thing I’d recommend to those starting out. As I wrote above, I kept my writing mostly to myself. Which, honestly, I think was a mistake.

There’s such a vast writing community out there, with driven, hard-working, empathetic folks at every stage of the process.

Since Seventh Grade Vs. The Galaxy was picked up, I’ve met some wonderful, extraordinary people. Although I can’t speak as much to the picture book/YA communities, middle grade writers are lovely and gracious. I consider some of those I’ve met on this ride true friends. I’m grateful to have them in my life. And I regret not reaching out sooner.

So if you’re just starting out, don’t make the same mistake. Reach out. Speak up. Join communities.

As an author-lawyer, how do your various roles inform one another?

In a lot of ways, they don’t. Or else, they compete for the mere 24 hours in the day. But there is a nexus between the two, and it’s as fundamental as it gets: Writing.

It’s (obviously) the heart of being an author. And it’s much of what I do as a lawyer. Crafting arguments. Organizing narratives. Tinkering with turns of phrase. It’s a skill I get to exercise in both contexts; and I’m very grateful for that.

My kids! I never much enjoyed playing store or making stuffed animals talk, but reading together was something we could always agree on.

I was writing for adults at the time, but reading so many books out loud . . . I just fell in love with them, especially the ones that made us laugh on one page and had me wiping away tears on another. It made me want to try writing for kids, too. It looked like hard work, but it also looked like fun! 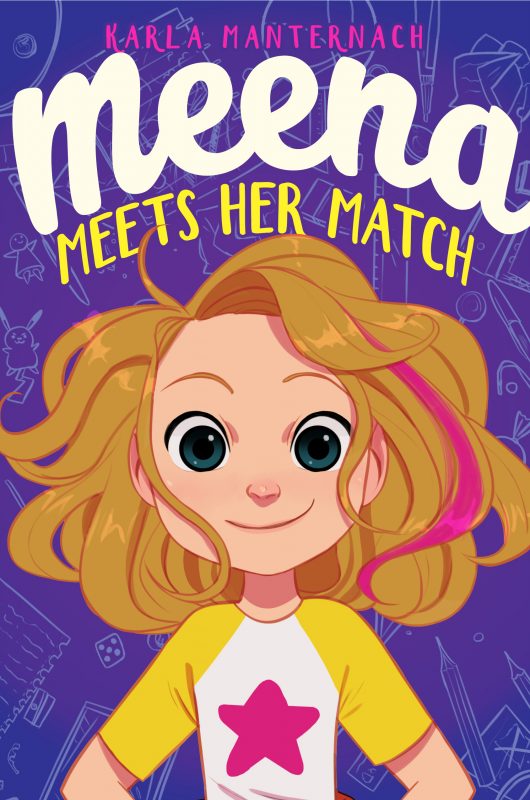 The main challenge was that I wanted to write a fun, funny book about a character with a big personality, but I also knew she’d be dealing with some difficult and even scary stuff.

The main character of Meena Meets Her Match (Simon & Schuster, 2019), is a scrappy, imaginative kid who loves color and making art of out of trash and who doesn’t always behave.

She’s also started having seizures, which send the adults in her life scrambling.

Sometimes I felt like I was writing two books: a light, domestic romp and a scary, what’s-wrong-with-me book. Bringing those two stories together and making it seamless was challenging. I worked hard to balance hard, scary material with fun and reassuring scenes.

But that’s what life is like, too, right? The hard stuff makes us appreciate everything that’s good in our lives, and the fun stuff keeps us from feeling overwhelmed.

How did the outside (non-children’s-lit) world react to the news of your sale?

My writing friends were thrilled for me! Everyone else was confused.

It was my own fault, though. I always sort of downplayed my writing, partly because I write best if I’m not talking about it, and partly because it spared me the awkward questions about when my book was coming out when I hadn’t even finished it.

When I got the email from my agent saying that Krista Vitola at Simon & Schuster had made an offer, I blurted out in the middle of a meeting, “I just sold my book!”

I think everyone thought I was selling a used book on eBay or something. I tried to explain, but they didn’t even know I was a writer, so it didn’t really compute.

They were all sort of like, “Well, isn’t that nice?”

I would have spent less time working on my first novel. It was great practice, and I learned a lot, but I spent years (years!) writing in circles, inching my way toward the ending. I wanted to write a Good Book so much that I wouldn’t let myself move forward until what I’d written so far was just right. Maybe that works for some people, but it was the wrong approach for me.

Now when I start something new, I make myself write a Bad Book. I write all the way through to the end before I let myself go back and fix it.

I might stop along the way to get my bearings, but I don’t rewrite anything until I’ve finished a whole draft. It’s a terrible draft, always, but it gives me a much clearer understanding of the story I’m writing, and that makes the whole process go a lot faster in the long run.

I’m trying to focus on my strengths, stay balanced, and accept that I can’t do everything. There was a period of six months or so when I felt like I would never catch up with the learning curve. I spent years working on craft, then all of a sudden I had a book coming out, and I had to get good at a bunch of other stuff that I never needed to do before.

I didn’t know what first pass pages were or whether I had a publicist or how to set up school visits. I had to build a website and create presentation slides and write press releases.

None of that is rocket science. It’s all learnable. It’s even exciting!

It’s just incredibly draining to learn everything at once. At one point, I read that I should create an autograph for book signings that was different from my financial and legal signature. I mean, that makes sense, but I could have cried. I thought, “I don’t even know how to sign my own name!”

Now that the book has been out for a few months, I’m starting to settle down. I know now that there’s always more I could do to promote the book. But if I want to get on with writing the next one, I have to do what I can, and then trust that the book is finding its way in the world and reaching people. I have more writing to do, so that’s what I need to focus on. 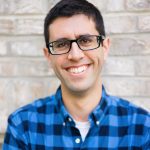 Joshua S. Levy was born and raised in Florida. After teaching middle school (yes, including seventh grade) for a little while, he went to law school.

He lives with his wife and children in New Jersey, where he’s a lawyer. Unfortunately, outer space doesn’t come up in court nearly as often as he’d like. Seventh Grade Vs. The Galaxy is his first novel. 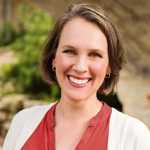 Karla Manternach grew up in small-town Iowa, a grubby kid in tube socks who once stopped a parade by running in front of a fire truck for candy.

When she was older, Karla detasseled corn, read Star Trek novels, and studied languages that no one speaks anymore.

Today, she lives with her family in small-town, Wisconsin, where she creates books for young readers and works as a freelance writer.

Her middle grade novel, Meena Meets Her Match, debuted in January. It will be followed by a sequel next year.