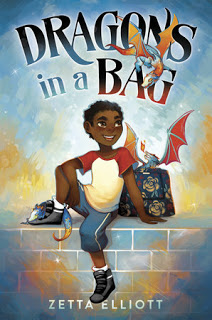 #readblack: What Would You Include If Someone Asked For A Quick List of Recent Titles Starring Black Kids? By Elizabeth Bird from A Fuse #8 Production. Peek:

“Recently an after-school program in Evanston told me that they had $325 to spend on books and that they really wanted titles for kids with black protagonists. What would I recommend?”

Love Your Neighbor: Book List #1 Standing Up For Each Other from the Association of Jewish Libraries. Peek:

“In response to the tragedy at the synagogue in Pittsburgh and to rising anti-Semitism in the United States, the Association of Jewish Libraries offers this series of book lists for young readers. Books read in youth impact future outlooks…”

An Open Letter To The Middleton School District From Authors In The Latinx Kidlit Community by Karen Jensen from School Library Journal. Peek:

“We are extending an offer to visit your school. We would like to talk to your students and staff about the richness of our culture. To show a positive and realistic representation of the very people this costume depicts as one-dimensional beings and implies should be kept out.”

Authors Guadalupe García McCall and David Bowles on the Mexicanx Initiative at Worldcon from Lee and Low. Peek:

“What kinds of conversations are we having in general, let alone with younger and older readers, about the need for more marginalized representation, as well as the recognition of power and what it means? How do we navigate those conversations, especially with those close to us?” 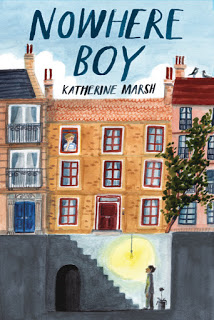 Stories For Kids About Heroic Young Refugees by Elizabeth Wein from The New York Times. Peek:

“Our Goal: Raise $50,000 for WNDB in the Classroom… From Oct. 29 to Nov. 30, 2018… This program targets the literacy gap that affects marginalized U.S. youth… To address this gap, the authors recommend providing children with literature that ‘a view of their cultural surroundings and insight on themselves.’”

“The biggest job in front of you…to get your character down on paper. The first chapter… the plot… individual scenes and descriptions will change. But once you’re able to ‘birth’ a character during National Novel Writing Month, this really will be the anchoring element of your manuscript going forward.”

Five Reasons Not To Do NaNaWriMo by Jo Eberhardt from Writer Unboxed. Peek:

“Now, to be clear, I secretly love NaNo. I’ve done it sporadically over the last couple of decades, and I absolutely love the concept of it. I just think that if you’re doing NaNoWriMo for the wrong reasons, it may do more harm than good.”

“The best thing and the worst thing about National Novel Writing Month (NaNoWriMo) is the relentlessness of your daily word count goal…So here are 16.67 ways to juice your creative energies and string together some sentences… to get you closer to your inevitable NaNo win.”

Confessions of a Slow Writer: Why NaNoWriMo Isn’t For Everybody by Anne R. Allen from her blog. Peek:

“I’m telling you it’s okay to be a slow writer. Especially if you’re a beginner. Write a little each day. Get joy from it. Feel pride when you get a really good scene finished. Because a writing career is not a race or a contest.”

Prioritize Yourself from Nathan Bransford. Peek:

“Chances are, you haven’t admitted to yourself or other people how important this dream is…If you just own it and tell the people you love how important writing is to you, chances are you’ll be surprised at how supportive they’ll be.” 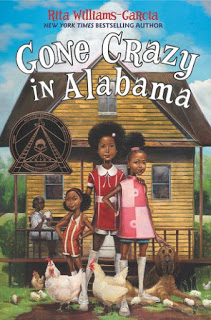 “Waiting in the Deep”: A Character Development Workshop With Rita Williams-Garcia by Andrea J. Loney from The Horn Book. Peek:

“’Fear is hard to share,’ Rita told us after she’d revealed some of her own formidable fears. ‘Yet you can’t be an advocate for your character if you don’t understand and respect his or her fear.’”

“My mother was a very talented artist, and when she was incarcerated she would send me letters and she would draw cartoons for me….But she had squandered that talent because of the drugs. And that really was my driving force to want to get published.”

Interview with Lucia DiStefano, Author of Borrowed by Holly Schindler at YA Outside the Lines. Peek:

“My own high school years were incredibly difficult, and maybe part of us stays in the period where we experienced the most struggle.”

“I often wish I was asked more about the craft of the verse. I spent so many agonizing hours ensuring every line break was precise, every word and repetition chosen with care—because it was important to me to maintain the integrity of the lyric while also advancing the narrative.” 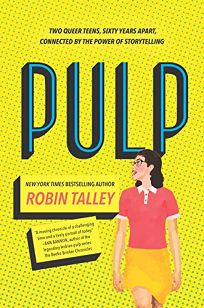 Q & A with E.D. Baker by Sara Grochowski from Publishers Weekly. Peek:

“I start with an idea, then the character, then the world. I don’t have a process and I don’t plan. When I can’t figure out what happens next, I try to relax, take a walk, and not focus on that next sentence.”

“I didn’t intentionally set out to publish in the U.S….as I became more knowledgeable about publishing, and as the push for increased diversity has happened—well, as much as the U.S. still has far to go, the U.K. has even farther.”

How To Use Swag To Support Your Book Marketing by Dawn Reno Langley from Jane Friedman. Peek:

“After writing and promoting 30+ books, if I’ve learned one thing, it’s that the one-on-one advertising works better than anything else—and the best part about book swag is that usually you’re the one handing the swag to your reader.”

“Twitter is a discoverability tool in your marketing toolbox…Think of your Twitter handle as an extension of your author brand…go with a close variation of your name so that readers and industry colleagues can find you easily and learn to recognize your name as they scroll their feeds.”

The Slow Blog Manifesto…And Eight Reasons Why Slow Blogging Will Help Your Career, Your Love Life, And Protect You From Angry Elephants from Anne R. Allen. Peek:

“Also, in order to get a readership in this saturated blogosphere, it seems to me we should be stressing quality over quantity. People don’t want more stuff to take up their time.” 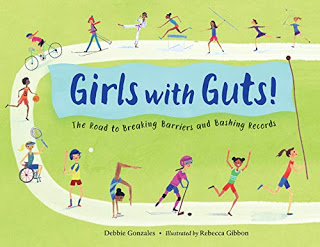 Producing a Podcast: the Debcast by Debbie Gonzales from The Mitten. Peek:

“Podcasting is actually an affordable medium. Mics and pop filters are inexpensive. Software is fairly cheap. Truthfully though, I’m still knee-deep in my learning curve. There are a number of moving parts to wrangle. But I’m getting it. Each episode gets easier and easier to produce.”

What To Do Eight Months Before Book Launch by Dan Blank from We Grow Media. Peek:

“A network of professional colleagues and personal friends who create and support creative work. How did they get this? They reached out. They showed up. They were curious. They were generous. They were supportive. None of those things require you to spend even a dime.”

“If B&N had been bought by W.H. Smith, one of the U.K.’s largest book retailers, the Journal said the move ‘could have transformed’ the bookstore chain which is undergoing a difficult business turnaround.”

“Most agents agree that fantasy will take a backseat to realistic fiction in the immediate future, and that the fantasy that does get published is likely to address the social issues teens are grappling with today: sexism, feminism, racism, and violence.”

How To Grapple With Discouragement In A Writing Career by John Walters from Science Fiction & Fantasy Writers of America. Peek:

“One thing to realize upon feeling crushed after a particularly disappointing rejection is that it’s okay to feel down for awhile. This feeling will pass, and it will be replaced with your usual determination.” 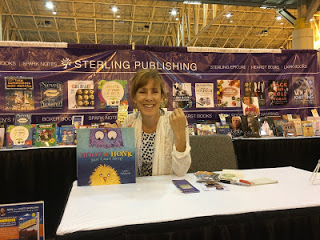 Last weekend, I traveled first to Denver for the Colorado Teen Book Con, hosted by Tattered Cover Bookstore. On Friday night, adult fans of YA books gathered at the downtown store location for an evening of delicious food, drink and book talk with authors.

On Saturday, the audience was teens at Littleton High School. I participated in a thrice-repeated “Young Love” panel with Kasie West, Stephanie Kate Strohm, and Tiffany Schmidt, and Lisa Brown Roberts. It was my first time meeting all of them, and I was blown away by their graciousness, talent and wisdom. Lisa, who doubled as the moderator, did an awesome job guiding the discussion.

Highlights also included fantastic keynotes by Jason Reynolds and Laini Taylor as well as my being driven/escorted around by educator volunteer Stacy Cohen, who is also my cousin!

From there, I continued on to the YALSA Symposium in Salt Lake City just in time to participate in the closing session with Jesse Andrews, Andrew Smith, and Brendan Kiely, followed by a massive giveaway signing. The discussions on the panel and afterward were heartening and inspiring. I enjoyed getting to know my fellow authors better and am infinitely grateful to all the librarians who made the event such a success.

As a side note, this was my third event of the season on the same author lineup with Andrew, and we’ll both be at the ALAN Workshop in Houston later this month. But today I’m off to the Kansas/Missouri SCBWI 2018 Middle of the Map  Conference in Overland Park, Kansas.

“To be candid, I can’t image having published this book a decade ago. I tried to write it back then, and today the novel is still pushing the envelope…. No, it’s more than that. It’s battering a brick wall. To extend the Oz analogy, it’s battering a yellow brick wall. A long conversation of YA novels that’s almost entirely absent of Indigenous female voices, real and fictional.”

SCBWI’s BookStop program is ongoing. Surf by to “like” or sign the guest books for Hearts Unbroken and Feral Pride. Then discover more new children’s-YA releases! 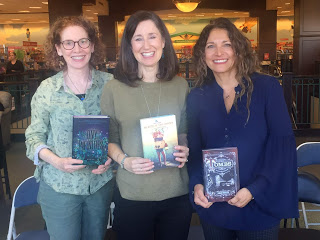 These are my first new books for my 2019 Halloween book project collection! 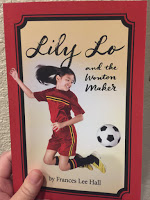 Thrilled to get my copy of Lily Lo and the Wonton Maker (Inkshares, 2018) by Frances Lee Hall!

This delightful #ownvoices story includes food, friendship and soccer, and is available now from Inkshares.

Earlier this fall I finished Liz Rosenberg’s biography of the Canadian author, House of Dreams: The Life of L.M. Montgomery (Candlewick, 2018). Then I read Maud (Penguin Random House, 2018), a fictional account of Montgomery’s young adulthood by Cynsations Canada reporter Melanie Fishbane (see her related guest post).
So, it no doubt that I was super excited that Sarah McCoy’s novel Marilla of Green Gables (HarperCollins, 2018) launched at my local bookstore recently. It feels so good to be back in Avonlea! 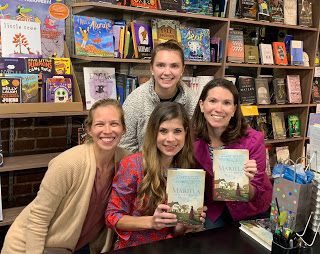