There’s a saying that a work of art isn’t complete until it has been witnessed.

So the book I wrote that would have completely changed my life if I’d read it as a fifteen-year-old wasn’t complete. Not until it had readers.

Over six years, the manuscript for Queer as a Five-Dollar Bill had been written and re-written, eight full revisions in all, with the final polish under the brilliant editorial direction of National Book Award-winner M.T. Anderson at a Highlights Foundation workshop. It was ready, but with no readers, it wasn’t complete.

My agent at the time told me it had been submitted, over a period of two years, to more than twenty editors. In all that time, it had only received five rejections, with the rest not even bothering to respond. No book deal meant no readers.

I didn’t doubt the merit of my story. I didn’t doubt that I’m a good writer. I did doubt the courage of traditional publishing to put out a story that would be controversial, as the novel’s hook is a closeted teen boy discovering a secret from history—that Abraham Lincoln wrote Joshua Fry Speed letters that could prove the two men were in love. Romantic love.

This doubt was strengthened by what happened to the nonfiction book for young readers that I had sold to an imprint of Simon & Schuster in 2015. The Queer History Project: No Way, They Were Gay? included five chapters on men who loved men in history, and Abraham Lincoln and Joshua Fry Speed were one of those chapters. Everything was going great until two weeks after Trump’s election, I got a phone call. Suddenly, they absolutely couldn’t publish my book.

I got the rights back in January of 2016, and my agent at the time told me it was so strong she’d sell it in three weeks… It was sent, I was told, to eight editors. Nine months passed, and no responses. Not even a “no, thank you.”

I was sure I was being preemptively banned by a traditional publishing industry too afraid to rock the cultural boat that was suddenly, with the election of our 45th President, in stormy seas.

Now I’ve been blogging about books, politics, and culture for LGBTQ kids and teens since 2007. I’m Here. I’m Queer. What The Hell Do I Read? has done well, gaining an audience across the world that’s built over time—The blog passed 2.5 million page loads in July 2018. So I thought, maybe one way to reach readers would be to post chapters on my blog.

Starting in September of 2017, over 32 weeks, I serialized the entire novel. I knew people were reading it, and I liked the idea of it being available for free, forever.

But the experience of reading the manuscript, clicking for each chapter, felt different than reading a polished, published book with copyedited text, interior design, an author’s note, discussion questions, and all the other great stuff that makes a book in your hands such a transformative experience. How could I create that? How could I reach more readers?

Publishing a book professionally is expensive. Copyediting, design, cover art, setting up printing and wholesale fulfillment—it’s thousands of dollars if you’re doing it right. $5,600 was what I needed to cover those expenses. And wouldn’t it be amazing if in addition to having the money to do that, I could have the money to donate copies of the book to LGBTQ teens, as my book is a story that could empower them?

That’s where the idea of crowdfunding came in. A friend argued with me that it sounded like a lot of work for what wasn’t in the big scheme of things that much money. Couldn’t I take a loan, or ask two or three wealthy friends?

But I loved the idea of crowdfunding being a barn-raising. Of the community coming together to not just help me professional publish Queer as a Five-Dollar Bill but to also raise enough money to donate some dramatic number (I settled on 400 copies) of the book to LGBTQ and Allied teens.

In January 2018 I launched the Kickstarter project, and we fully funded in six days! The campaign went on for a full thirty days, and by the end 182 people had donated enough money to give away 810 copies of the novel to LGBTQ and Allied teens! 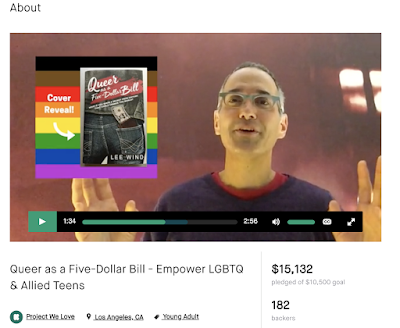 Now with the funding secured, the publish date was set, and I put on my publisher hat and got to work. I sent the manuscript out asking for blurbs. I held a cover design contest. I hired a book designer. I tested out copy editors, found a great one, and had them do their thing. I printed ARCs. I submitted the book for reviews. I printed up bookmarks, and started using them instead of business cards. I signed up for marketing programs, to let librarians and the rest of the trade know about my book.

And I gave away the first 260 copies of the ARCs to LGBTQ teens at four summer sessions of Camp Brave Trails.

I got a curve ball thrown at me when on July 25, 2018 it was revealed that my agent at the time had lied about submissions, and rejections, and two book offers that were ‘pending.’ She lied to about 60 other clients as well.

The book I’d decided to crowdfund and author publish may never even have been seen by any editor! I hadn’t been preemptively banned by a publishing industry in need of courage, I’d just been preemptively screwed over by a criminally manipulative agent! (Needless to say, Danielle Smith is no longer an agent, and I’m now represented by the ethical and wonderful Marietta Zacker.) 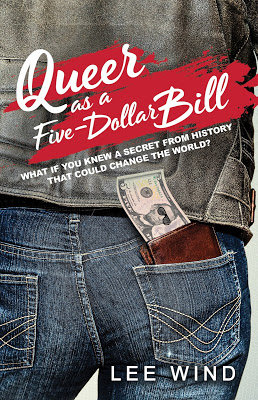 But the train had left the station: 182 people were waiting for their copies of Queer as a Five-Dollar Bill. I’d committed to give away 810 copies to LGBTQ teens. And I was already getting strong trade reviews! Librarians were interested! I’d started booking some events! And I’d told the world that I was publishing this book. That couldn’t change now.

So Queer as a Five-Dollar Bill publishes on Tuesday October 2, 2018 (BookBaby).

It’s the story of Wyatt, who is fifteen, and nobody in his homophobic small town of Lincolnville, Oregon, knows that he’s Gay. Not even his best friend (and accidental girlfriend) Mackenzie.

Then he discovers a secret from actual history: Abraham Lincoln was in love with another guy!

Since everyone loves Lincoln, Wyatt’s sure that if the world knew about it, they would treat Gay people differently and it would solve everything about his life.

So Wyatt outs Lincoln online, triggering a media firestorm that threatens to destroy everything he cares about—and he has to pretend more than ever that he’s straight. . . . Only then he meets Martin, who is openly Gay and who just might be the guy Wyatt’s been hoping to find.

And here’s hoping it reaches readers.

2 thoughts on “Guest Post: Lee Wind: From Kickstarter to Book – The Wild Roller Coaster of Publishing My Debut YA Novel”