About a year ago, on a NerdCamp panel called “Tough Topics in Middle Grade Fiction,” we were talking about how middle grade was evolving, growing up, tackling subjects that used to be considered taboo—for example, sexuality, terrorism, refugeeism, and drug use.

I asked the educators in the room which underrepresented topics they’d like to see on their bookshelves.

A middle school principal raised her hand. “Things we used to see only in high school,” she said.

She went on to explain that lately she’d been struck by the frequency of mental health issues among her students—depression, anxiety, self-destructive behaviors like cutting—that previously she’d associated with teens.

“We need more middle grade books on these subjects, so we can start the conversation with younger kids,” she urged.

Her remarks were disturbing, but not surprising to me. At the time I was finishing my first draft of Everything I Know About You (Aladdin, 2018), a middle grade novel about a seventh grader with an eating disorder.

As someone who had survived anorexia and bulimia in my college years, I’d always assumed that disordered eating was a strictly YA sort of topic, best explored in a book like Wintergirls by Laurie Halse Anderson (Speak, 2010).

But when I came across several articles about the recent rise of eating disorders among middle school students, I sought out a social worker who specialized in treating these patients.

Oh yes, she said. Her patients were definitely getting younger. Fewer high school and college kids, more kids in the middle grades.

And they—and their friends—needed middle grade fiction. Books that reflected their struggles. Books that offered hope. 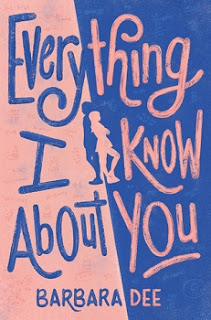 Given my own experience, I knew I’d hit on the right topic for my next novel. I understood the challenge: to treat a serious, emotionally complex, potentially scary subject in a way that was appropriate for nine-to-thirteen-year-old readers.

My previous middle grade novel, Halfway Normal (Aladdin, 2017), was about a cancer survivor’s return to seventh grade, and the way she used Greek mythology to help her connect with classmates and teachers.

Before that I’d written Star-Crossed (Aladdin, 2017), about an eighth grader’s coming to terms with her own bisexuality via the middle school production of “Romeo & Juliet.”

I’d had some experience exploring sensitive topics in a way middle graders would find accessible and appealing.

And for Everything I Know About You, I knew my approach:

First: Don’t be depressing. Middle schoolers may crave tougher topics these days, but they still want to be entertained. Since the subject matter of anorexia is inherently upsetting, I decided to come at it from an angle—with a narrator who wasn’t the character struggling with the disorder, but another girl who was both healthy and funny.

Tally is a math nerd who dresses outrageously and tells fart jokes about Pythagoras; at once altruistic and self-involved, she takes a while to understand the full extent of her roommate Ava’s problem.

This is a technique I’ve noticed in several recent middle grade novels which tackle tough topics: Write from the point of view of a an entertaining, often funny, narrator, who may or may not have full information. 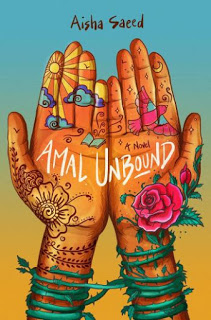 Or write from the point of view of a character who is strong and resourceful, like the protagonist of Amal Unbound (Nancy Paulsen, 2018), who finds herself forced into indentured servitude.

Author Aisha Saeed explains how she kept her narrative buoyant, despite Amal’s troubles:

“Amal is deeply upset about her circumstances, but it’s also true that people are stronger than they can give themselves credit for. I know in my own life there have been difficulties I’ve gone through that, were I to look at them from afar, I would have thought I could not have made it through the other side, and yet when thrust into those difficulties I found I was stronger than I realized.

“The only way through dark times is to keep on persevering, to find and hold on to light wherever we can find any, and to keep on going.”

Second: Weave the “tough topic” into a bigger picture. I set Everything I Know About You on a four-day field trip to Washington, D.C., where the kids stay at a quirky, slightly surreal hotel. To foster class unity, the teachers assign roommates, creating conflicts among several kids, especially the main character, Tally, and her roommate, Ava.

In this way, the “tough topic”—anorexia—is just one part of a larger story about friendship, self-acceptance, family, and a crazy field trip.

Some middle grades which create a whole complex ecosystem around characters facing various challenges: Hurricane Child by Kheryn Callendar (Scholastic, 2018); See You in the Cosmos by Jack Cheng; Paper Chains by Elaine Braithwaite Vickers (HarperChildren’s, 2017); The Stars Beneath Our Feet by David Barclay Moore  (Knopf, 2017).

Third: Give the characters an identity separate from the “tough topic.” Sometimes YA novels seem to hyperfocus on the main character’s struggles, which leads them to existential despair.

Middle graders often need a break from the darker stuff. It helps them as readers to create characters who have other frames of reference, other things going on in their lives—for example, friendships and hobbies.

In Everything, when Tally isn’t wondering about her roommate’s troubling behavior, she’s thinking about math, her collection of weird fashion accessories, her friends, her dad’s bakery, her own adoption, her dog…oh, and dying her hair Sour Apple Green. 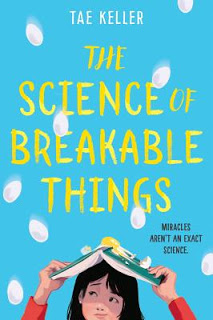 As author Tae Keller (The Science of Unbreakable Things (Random House, 2018)) puts it:

“There’s an idea that when scary, difficult things happen to us or people we love, that scary thing becomes our entire life. And sometimes that’s true. But a lot of times, the difficult parts of life are just that—one part.

“Natalie is in seventh grade. She goes to school and does her homework and deals with friendships and crushes and all the things middle schoolers deal with. I don’t think she’s so much obsessing over a distraction as she is trying to understand how all the pieces of her life fit together. ”

Other middle grades featuring characters who use strong—sometimes obsessive—interests to help them cope: Lights, Camera, Disaster by Erin Dionne (Arthur A. Levine, 2018)(movie-making); The Stars Beneath Our Feet by David Barclay Moore (Legos); See You in the Cosmos (rocketry and space); The Someday Birds by Sally J. Pla (HarperChildren’s, 2017)(ornithology); Stanley Will Probably Be Fine by Sally J. Pla, illustrated by Steve Wolfhard (comics)(HarperChildren’s, 2018); Amal Unbound by Aisha Saeed (reading); Lily and Dunkin by Donna Gephart (Delacorte, 2016)(saving the tree); Saturdays with Hitchcock by Ellen Wittlinger (Charlesbridge, 2017)(classic movies).

Fourth: Include benevolent (but imperfect) adults. In some YA novels, it seems as if all adults are absent, alien, untrustworthy or even malevolent.

Middle grade readers reading about “tough topics” need some reassurance, some sense that an adult (or two) is capable of offering guidance and support. But they’re unwilling to believe that a perfect fairy godmother/teacher/parent is going to swoop in and solve all their problems.

In Everything, Tally is deeply bonded with her parents, and comes to see that certain adults she’d previously judged (her history teacher, Ava’s mom) are more complex than she’d realized.

Some middle grade novels with flawed but well-intentioned adults : Amal Unbound (Nasreen, both parents); Hurricane Child (the parents); See You in the Cosmos (various adults).

“That is why when I wrote Nasreen and Amal’s parents, I wanted to write about their actions honestly but I also wanted to make sure they were more than just their flaws, as all of us humans are.”

Fifth: Be true. I know I could not have written Everything, Halfway Normal or Star-Crossed if I didn’t have some strong connection to these topics. But I don’t believe fiction is autobiography. And even as I’ve plumbed my own experience to write those books, I’ve looked outside myself, researching, reading up on the subjects and interviewing kids and experts.

While I don’t believe you need to have lived a subject to write about it, I think it’s essential to locate the truth in your topic, and find the corresponding truth within yourself.

Of course, the challenge for the author is not to overdetermine the “truth,” or rely too heavily on her own experience. Describing her process in writing Mason Buttle, Leslie Connor says:

“I kept asking myself, is this really true for Mason? Is the writer standing out of the way?” 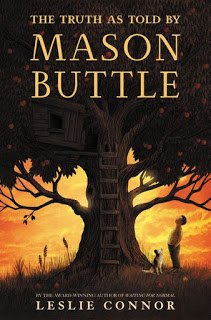 I ended Everything with Ava getting help for her disorder, telling Tally she’s almost ready to return to school.

When I finished Mason Buttle, Amal Unbound, Ruby on the Outside and Hurricane Child, I cried tears of relief for the title characters. They were okay. They’d be okay. Despite their struggles, they had things in their lives to look forward to.

“Often, a compelling character is one that has some sort of sadness to their story; it’s part of what they’re up against.

“I’ll write about the sadness, sure. But I don’t want to write a bleak book either. I think of hope as the reward that the reader, writer, and character share at a story’s end. Something good has to be on the horizon.”

Seven: But don’t sugar-coat. Middle grade readers have fake-detectors tuned to eleven. If you write a sappy ending, they’ll roll their eyes in disgust.

At the end of Everything, I was careful not to promise a friendship between Tally and Ava—just as I didn’t promise a happily-ever-after ending for Star-Crossed. Maybe things will work out for the characters, and maybe they won’t.

The world is tricky and full of surprises.
That’s a life lesson for middle grade readers—and maybe another “tough topic” right there.

Barbara Dee is the author of nine middle grade novels, all published by Aladdin/S&S. 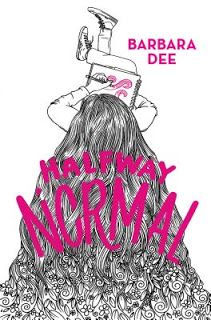 Everything I Know About You has been called “poignant and often hilarious” by Kirkus Reviews, “a strong addition to library collections” by School Library Journal, “honest and engaging,” by PW, and is a Junior Library Guild selection.

Star-Crossed is a 2018 CCBC Choice, a 2018 ALA Rainbow List Top Ten, a 2018 CBC Notable Social Studies Trade Book for Young People, a 2018 Goodreads Choice finalist, and listed on several Best of 2017 lists, including those by the Chicago Public Library, King County (Washington State) Library and Cleveland Heights (Ohio) Library.

Barbara is one of the founders of the Chappaqua Children’s Book Festival. She lives in Westchester County, New York.