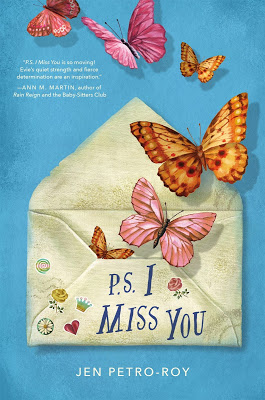 Jen Petro-Roy is the debut author of P.S. I Miss You (Feiwel & Friends, 2018). From the promotional copy:

Evie is heartbroken when her strict Catholic parents send her pregnant sister, Cilla, away to stay with a distant great aunt. All Evie wants is for her older sister to come back. Forbidden from speaking to Cilla, Evie secretly sends her letters.


Evie could really use some advice from Cilla. But Cilla isn’t writing back, and it’s time for Evie to take matters into her own hands.

I’m always fascinated by epistolary novels and was very eager to talk with Jen about her process.

One of the most interesting parts of revising P.S. I Miss You was how complicated the calendar year would prove to be!

Because all of Evie’s letters are dated, I had to make sure that the contents of her letters aligned with the dates given on the top of every letter. If Evie mentioned that she would be doing something on a Friday, then that later letter and its events had to align with the appropriate day of the week.

Since Evie comes from a very Catholic family, I also had to make sure that the religious holidays fell on the correct day of the specific calendar year I used to crosscheck.

Then I had to make sure that I gave enough time for her older sister Cilla to write back, and that Cilla’s letters weren’t commenting on something from a letter that wouldn’t have been received yet. It made my head spin after a while!

Another challenge was the unique nature of writing a novel in letters.

I concentrated on making sure that while most of the letters were written in a genuine “letter writing” way, with Evie talking about her feelings and what happened on a certain day, that I also balanced those musings with dialogue in appropriate places—and especially dialogue that didn’t feel forced in letter format.

While writing and revising P.S. I Miss You, I was initially inspired by Beverly Cleary’s classic, Dear Mr. Henshaw, illustrated by Paul O. Zelinsky (HarperCollins, 1983). Re-reading that book gave me the idea to write my debut novel in letters.

I loved the concept of two loved ones being separated for some reason (I just had to figure out the reason!) and using letters as a device to express that longing and sense of disconnection.

The amazing Sharon Creech’s Walk Two Moons (HarperCollins, 1994) also showed me that middle grade readers can handle serious issues, and that these issues can be incorporated into stories in a way that is honest and true.

One of my author inspirations is Kate Messner, who throughout her career, especially in the realm of middle grade fiction, has demonstrated how to infuse stories with gravitas while also balancing that “realness” with warmth, humor, and hope.

My relationship to the children’s-YA writing community first started when I was a librarian.

Before I decided to concentrate on making my dream of publication a reality, I was a children’s/teen librarian for about five years. I selected the YA books for my library, I booked author visits, and I interacted a lot with people in the library world on Twitter and social media.

As I started to think more seriously about actually revising some of my messy first drafts or finishing my many half-drafts, I began following more authors on Twitter. Agents and publishers were soon added to my list, and I started interacting with them all, learning about the business of publishing and gathering helpful writing tips through blog posts and comment threads.

I think this sense of community is so crucial to our profession since it can be so solitary. Yes, we do research and talk to people, and yes, we go to conferences and schmooze (or do as much as we can, as so many of us are introverts!), but most of my time is spent at the keyboard, either writing or staring into space.

It’s so nice to be able to reach out to my peers and learn from our community when I’m online. Cultivating those relationships helped make my publication process a lot less stressful.

Honestly, this transition has been more difficult than I expected.

Like many, I always had this pie-in-the-sky belief that once I was published, everything would be perfect. I think it’s that belief that gets so many struggling writers through the stressful process of querying, revising, submitting, and more.

You believe that you will make it.

You believe that things will someday be wonderful. And, yes, publication is wonderful. It’s thrilling to see P.S. I Miss You on bookshelves and to know that my peers and (more importantly!) actual kids are reading my words. But I didn’t realize how much I would still question myself.

I have a history of getting anxious about certain things, and I tend to compare myself to others a lot, even though I know it’s not helpful or even merited.

I don’t begrudge anyone their success, and it’s not even about what I “don’t have.” It’s that insistent voice inside my head that has haunted me for so long (and which I’m incorporating into my 2019 fiction and nonfiction books, Good Enough and You are Enough, both Feiwel & Friends) that sometimes tells me (if now only in a whisper rather than a yell) that I’m not performing to the best of my ability.

That’s when I need to stop and remind myself that I wrote a book. That I published a book. That I’m proud of it and that I’m continuing to write. That I love what I’m doing. I love the art of it. I love constructing sentences and creating stories and characters.

That that is good enough, whatever my official “job title” is now. 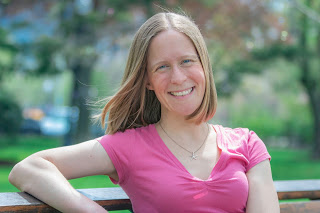 Jen Petro-Roy was born, raised, and still lives in Massachusetts, even though she rejects the idea that snow and cold are ever a good thing.

She started writing in third grade, when her classroom performed a play she had written. It was about a witch and a kidnapped girl and a brave crew of adventurers who set out to save the day. As a kid, numerous pictures of Jen often featured Baby-Sitters Club and Sweet Valley Twins books clutched in her hand, so it was just a matter of time until she started writing her own books for children.

In the past, Jen has worked as a teacher and a teen and children’s librarian. She loves running, board games, trivia, and swimming, and has a mild obsession with the television show Jeopardy!

One thought on “New Voice: Jen Petro-Roy on Epistolary Novels & P.S. I Miss You”