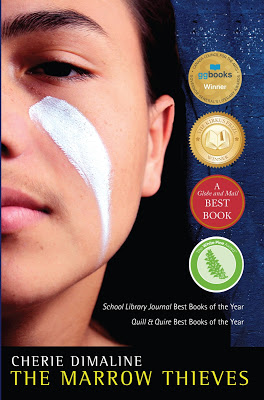 The 3 Different Audiences Cherie Dimaline Wrote the YA Novel The Marrow Thieves For from CBC. Peek:

“I’m getting asked these incredibly insightful, reflective and mature questions. I had a 15-year-old in Vancouver ask me a few weeks ago, ‘How can I be a better ally for Indigenous communities without taking up space?’ And I thought, ‘Wow! Am I ever happy you’re our future!'”

Get Inspired with Jennifer Mathieu from Blue Willow Bookshop. Peek:

“I think being an educator influences me in that it reminds me all the time of who my audience is. I’m reminded on a regular basis that teenagers are far more intelligent, compassionate, and complex than we think and that they can handle tough subjects and books that have nuance and complexity.”

Erin E. Moulton And Things We Haven’t Said by Adi Rule from The Launch Pad. Peek:

“I was tasked with weeding the teen nonfiction section and I came upon the 300s. There were some great resources on rape and sexual assault for adult readers, but far less for teen survivors. I started to wonder, what would a good teen resource look like?”

“I started writing in the first-person perspective, all in the present day. But I realized…that I couldn’t do the story justice without seeing what happened in the past…This became a good opportunity to juxtapose race relations and issues in the past with …the present…” 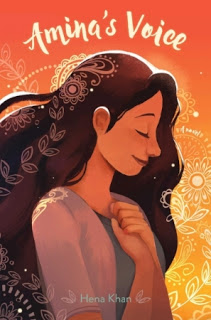 It Gives Me a Tremendous Amount of Hope: Author Hena Khan on Kids, Tolerance, and the Universal Experience of Middle School by Melanie Boyer from First Book. Peek:

“My ultimate goal is to create layered and multidimensional characters that all types of people can relate to—male or female, young or old, from any ethnic and religious background.”

Five Questions for Winifred Conkling by Kitty Flynn from the Horn Book. Peek:

(advice for young activists today) “Stay strong. The first women’s rights convention was held in Seneca Falls, New York in 1848. Women didn’t get the right to vote until 1920. Change takes sustained effort over a long period of time.”

The Movement Will Fail Without Intersectionality from Tracey Baptiste. Peek:

How to Be More Inclusive of Nonbinary, Genderneutral, and Trans* People in Your Spaces from Dill Werner. Peek:

“I voiced my issues with the language used in Kidlit Women and how I felt excluded. I was heard. Grace Lin asked me to come into the private group and share ways they could be more inclusive toward nonbinary and trans* people. So, here I am.” 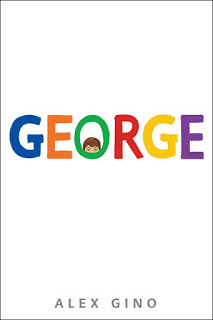 “In most of the libraries where George (Scholastic, 2015) has been withheld from children, the gatekeepers have been women—usually white women. #Kidlitwomen is about making the children’s book industry better for women, but it’s imperative to realize that feminism is intersectional.”

Where Is the Diversity in Publishing? The 2015 Diversity Baseline Survey Results from Lee & Low Books. Peek:

“The diversity problem is not the responsibility of diverse people to solve. It is a problem for everyone to solve. Now that the Diversity Baseline Survey is completed, the real work toward changing the status quo begins.”

Defying Odds and Changing Perspective: A New Kind of Intensive by Sophie Velasquez from The Writing Barn. Peek:

“‘Being marginalized means that your stories, your work, your concerns, your educational needs, your wild hopes and dreams, can often be pushed to the side, made harder to realize or even to give voice to,’ Amy Rose (Capetta) says…. ‘Even though writing appears solitary, writing craft is collaborative.’”

“You’re part of a lineage, a tradition, a rich, vexed, complicated, troubled, and beautiful history of literary achievement. That can be a deep wellspring from which to draw strength.” 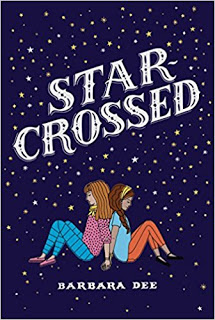 “When I read Barbara Dee’s middle-grade novel Star-Crossed (Aladdin, 2017)…I cried. All of the yearning and excitement I felt as a seventh-grade girl with a crush on another girl came back to me while reading.”

LGBTQ+ Diversity in YA Novels is Getting Better, But Queer Girls are Still Getting Left Behind by Alaina Leary from Bustle. Peek from Kayla Whaley:

“’Most queer girls in YA have historically been white, abled, and cis, so I think addressing that needs to be a major priority,” she says, “while focusing in on specifics, like the extreme paucity of traditionally published Black authors and the ways anti-Blackness operates in YA generally and queer YA.’”

“If a girl knows how to wrestle an alligator, that’s fine. But we should also celebrate a range of experience, by considering quiet girls, smart girls, and girls who get things done with their wits alone. The flip side is that we should see boys inhabit these spaces, too…”

How Writers Can Bring Setting to Life Through Personification by Becca Puglisi from Live Write Thrive. Peek:

“When it comes to enhancing the setting, one of the most effective figurative language techniques is that of personification: adding human characteristics to an inanimate object. Done well, this can add a sense of movement and emotion to an otherwise sterile scene.”

“Mind maps are great for brainstorming all the elements you want to include in the scene and depicting how contrasting ideas will play off each other.”

“Conflict and action hook a reader and transport them into your story. This is exactly the goal of your novel’s opening. So start in action, start with conflict. You may want to use a smaller, scene-specific conflict (or “bridging conflict“) to get readers on the bus initially.”

4 Mistakes to Avoid When Building Suspense in Your Novel by Laurence MacNaughton from Fiction University. Peek:

“Remember: suspense is all about asking questions. Building suspense in your novel is not a one-time event. It’s a constant process. You have to continually pose crucial questions throughout your book, starting in the very beginning, and keep the reader asking questions faster than you answer them.” 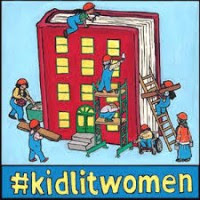 “You can’t change how much you earn until you understand how you earn it. As an author or illustrator, you are running a business, and the details of your royalty statement give you vital information about the way your business functions.”

Women in Translation by Avery Fischer Udagawa from SCBWI. Peek:

No More All-Male Panels: A Pledge in Solidarity with #kidlitwomen from Mike Jung. Peek:

“I don’t organize events myself, I can pro-actively communicate with event organizers who extend their invitations to me. I can ask who the other presenters/panelists are, and if it’s an exclusively male lineup, I can voice my concern, and suggest names of people who aren’t men that could be added.”

No More All-White Panels: A Pledge from Laurel Snyder. Peek:

“We can’t change everything overnight, but we can refuse to participate in the marginalization of our colleagues and friends. We can hope that our example draws attention from conference and festival organizers, from publishers, booksellers, educators, reviewers, and others. If enough of us join together, perhaps diverse panels will become the rule, not the exception.”

“I’m getting several hundred queries a month and I request about three manuscripts a week, but it all comes down to selling me in the query and the pages.” 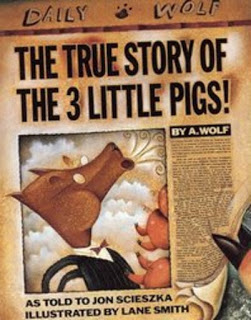 An Interview with Regina Hayes by Leonard S. Marcus from The Horn Book. Peek:

“Lane [Smith], this thin, shy young man, came in with his portfolio of really astonishing artwork, but I didn’t have anything for him at the time. It required a particular type of manuscript. And he said, ‘Well, maybe you’d like this story my friend wrote.’ And he pulled out Jon’s [Scieszka] manuscript..”

“…too often that I see writers not taking into account ‘the rules’ of publishing – putting in the proper research, revising, revising, revising, writing query letters, etc….There are a lot of letters between A (write the thing) and Z (publish the thing), and you can’t expect to have a full alphabet without them.”

Going It Alone as an Austistic Woman Author from Lyn Miller-Lachmann. Peek:

“I think there are ways publishing can change to be more friendly to neurodiverse authors, and I believe that the industry can and should accommodate rather than ask us to do all the changing.”

“We are losing talent because of this, and we need to find a way to privilege the women who have been hurt over the men who make publishing houses a lot of money.” 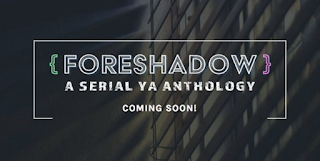 Submission Guidelines from Foreshadow: A Serial YA Anthology. Peek:

“We are seeking original YA short stories…The deadline to be published in our first issues of 2019 will be September 1, 2018.”

“Through this fundraiser you can bid on writing work critiques, consultation calls, signed books, signed CDs and book-related accessories and experiences.100% of the money raised by this event goes directly to the Rape, Abuse and Incest National Network (RAINN), the United States’ largest anti-sexual assault organization.” 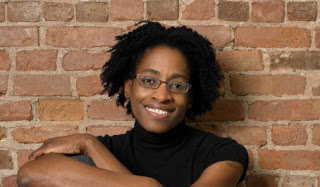 “…the world’s largest award for children’s and young adult literature. The award amounts to 5 million Swedish krona (approx. $613,000 or EUR 500 000) and is given annually to a single laureate or to several.

The citation of the jury reads:
“Jacqueline Woodson introduces us to resilient young people fighting to find a place where their lives can take root. In language as light as air, she tells stories of resounding richness and depth.’”

See also an interview with Jackie about receiving the award from ALMA. 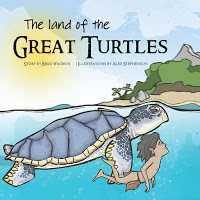 
I’m pleased to announce that Tantalize (Candlewick, 2007, 2008) is now in its seventh paperback printing. Thanks to all for your ongoing support and enthusiasm! 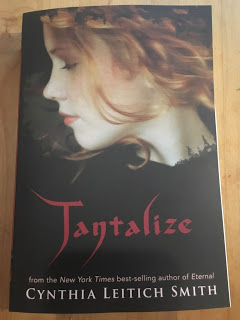 It’s surreal to think back on a story that started as a scribbling draft back in 2000 and spawned–really no better word for it–a six-book prose-graphic series, three-book spinoff, and three short stories published in anthologies.

I also be speaking on a panel, “Native YA Today: Contemporary Indigenous Voices and Heroes for the 21rst Century & Beyond,” with Alia Jones (moderator), Joseph Bruchac, Eric Gansworth, and Dawn Quigley. It’s scheduled from 9 a.m. to 10 a.m. June 23. 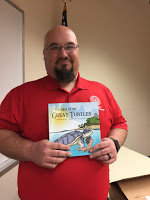 I met author Brad Wagnon in person last weekend while he was in Austin giving a talk on Cherokees during the Civil War. (See Traci’s interview with Brad.)

Not only was it a rare treat to connect in person with the subject of a post I had formatted, but it was also enlightening to learn details of history largely ignored during both my high school and college classes on Oklahoma history.

I was also thrilled to have my essay, The Parrot featured on Rebekah Manley’s blog, Brave Tutu. Peek: “Each time we turn away from things that scare us, we give them more power. Only by taking that brave leap can we learn to soar.”


“Concerted Cultivation” and the March For Our Lives