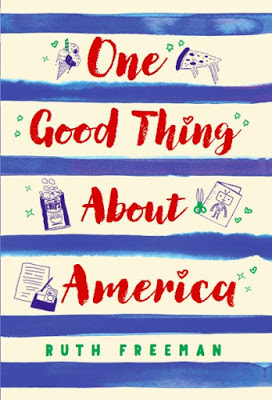 Although Ruth Freeman has authored several picture books, she made her debut as a novelist earlier this year with One Good Thing About America (Holiday House, 2017). From the promotional copy:


Is it ever easy being new?

Anaïs was the best English student in her class in Africa. Now in Crazy America she feels she doesn’t know English at all. Nothing makes sense…chicken

In letters, she writes to her grandmother back home about Halloween, snow, mac ‘n’ cheese and princess sleepovers. She misses her father and brother and hopes the fighting is over soon.

In the meantime, she writes about the weird things Crazy Americans do, and wonders if she will ever feel at home in this strange new country.
What first inspired you to write for young readers?

When I found that I could read chapter books, it was like falling in love. My seven- or eight-year-old self wouldn’t have known to call it that, but it absolutely was. I couldn’t believe the places I could go and the people I could meet, all between the covers of a book! Words melted away on the page, time stopped, and I would go off with fairies, pioneer girls, knights or rabbits. Being so absorbed and transported at that age was as close to real magic as I will ever get.

I think when you’re young and fall in love with reading, it never leaves you. You’re hooked.

As I got older, the notion of recreating the magic I found in books began to take hold. I wanted to reverse the process. Could I weave words together in such a way that the picture in my head would show up (similar but different) in someone else’s head? How cool would that be?

Of course, it’s one thing to catch the desire to write and another thing to do it, as I found out. But that’s another story (see below).


Two words: my students. I teach English language learners (ELL) at an elementary school in Maine, so everyday I work with young people, some of whom arrived in this country a week ago, some of whom were born here but speak another language at home.

It takes five to seven years to become fluent in English, both the basic conversational language as well as the academic language.

As ELL teachers, we often work with the same students over several years, which means we get to know them, hear their stories, answer their many questions and meet their families.

I wrote this book for two reasons. The first was so that my students, and students like them, could see themselves in a book. There aren’t enough children’s books about the experiences of newcomers. At least, not yet.

The second reason was so that all readers could get a glimpse of what life might be like for a girl new to this country.

In the author’s note at the end of the book, I write that there’s no way I can truly understand the experience of a refugee or asylum seeker but my hope, and expectation, is that one day my students, and others like them, will write their own stories…and I can’t wait to read them!

Because I was writing from the protagonist Anaïs’ point of view, the biggest challenge was to make her writing, her voice, sound authentic.

I limited the words I could use to the ones used by a typical newcomer.

I added a few expressions she might have picked up such as, “for sure,” “for goodness’ sake,” and “crazy” to describe anything that didn’t make sense (which was a lot of things!). She uses “cool” and “bingo” she hears from her teacher. Because her vocabulary is still growing, she repeats words for emphasis, such as “I am not happy. Not not not happy.” Other vocabulary lessons spill over into her writing, too, such as her use of comparative adjectives: “big, bigger, biggest.”

Anaïs’ grammar and spelling was also a challenge. I wanted her writing to look as realistic as possible, so I decided it shouldn’t be perfect. I tried to include enough misspellings to make it authentic but still keep it legible.

As time goes by, her spelling, verb tenses, grammar and vocabulary improve. I worked long and hard to make the progression plausible (though her improvement is probably faster than it would be in real life). It was tricky remembering what words she had learned and what misspellings she had corrected as the story unfolded!

Using an entirely epistolary format must have been particularly challenging, but it works beautifully. Can you tell us what drew you to this format?

I have to admit I had never thought about writing a story in letters before. The idea for a “school” story was rolling around in my head, but that was as far as I’d gotten with it.

One spark came when I was helping some ELL students in a 2nd grade classroom. The class was writing persuasive letters, first having to state an opinion, then writing a letter to persuade someone to their point of view.

However, it wasn’t until later that the letter writing and the “school” story idea came together.

I had these bits and pieces in mind, but in the end, it was my students’ voices that made everything click. I can often hear their distinctive voices and accents in my mind long after we’re together, and it was these voices that I wanted to preserve on paper.

I felt the best way to do this was writing from my character’s point of view through letters she was writing home to her grandmother.

What advice do you have for beginning children’s writers-YA writers?


If you have a burning desire to write for young people, try it! Even though I had wanted to write for a long time there came a point when I felt time was passing and it was now or never!

But…there’s always a but…be prepared for a long, slow, hard slog. If you want it badly enough, you will stick with it. If it’s not for you, you’ll find that out and discover some other wonderful creative path to follow. It’s a journey, right?

But, if you get more and more determined to write, here are a few tips from one (and only one) writer:

Read children’s/YA books! Haunt your local library, make friends with the children’s librarian, ask what everyone is reading, but don’t forget to read the classics as well.

Learn about the publishing business. One excellent way is to join SCBWI (Society of Children’s Book Writers and Illustrators). They have a lot of information online, they hold great conferences, and they can hook you up with local chapters and writers groups.

Find what works for you in the way of writing. You can read everyone else’s tried and true methods, but in the end, you have to figure out which way is best for you.

For example, I cannot wake up at 4 a.m. and write! I work full-time at the moment, so I take notes and glean ideas during the week and carve out Sundays for writing. And I work hard on stories in the summer when I’m not teaching. It is not easy. When I had small children, I wrote nonfiction picture books partly because I could do the research whenever I could find the odd moment of free time.

Write about what grabs you and you’re passionate about–not, I repeat not, what you think will sell and make you a million dollars. Your heart won’t be in it. Don’t get hung up on “brands” and “platforms.” Keep it real.

Lastly, when you are ready to plunge into your first draft, learn to banish the critics sitting on your shoulders (they keep coming back, so keep shooing them away), take a deep breath and enjoy making a mess!

You have the freedom to write whatever you want…and it in no way has to be perfect!

Keep an image of a mud puddle in mind. 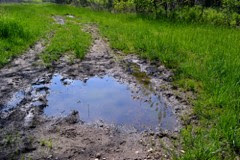 Later, you can make everything pretty.

An educator’s guide is available from the publisher.

Ruth Freeman grew up in rural Pennsylvania but now lives in Maine where she teaches students who are English Language Learners, including many newly arrived immigrants. She’s worked with students from every continent except Australia and Antarctica. She has also authored several nonfiction picture books on subjects ranging from hairstyles to the history of chocolate.