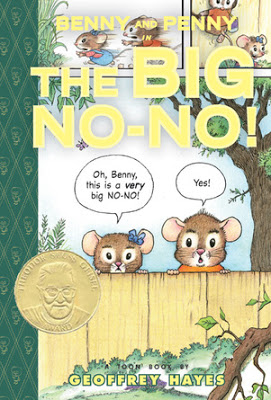 Author and illustrator Geoffrey Hayes died in June while Cynsations was on summer hiatus.

Obituary: Geoffrey Hayes by Shannon Maughan from Publishers Weekly. Peek: “…Hayes, best known for the comics-style artwork and expressive animal characters in his many titles for emerging readers, died suddenly on June 2, of apparent natural causes, in Asheville, N.C. He was 69.”

His first book, Bear by Himself (Harper & Row, 1976) was edited by Edite Kroll. “It was a wonderful 40-plus years of first working as his editor and then his agent—and friend—and to enjoy watching him hone his talent as both artist and writer.”

Hayes worked as an author and illustrator and also illustrated books by other authors including When the Wind Blew by Margaret Wise Brown (Harper, 1977). It was selected as the New York Times Best Illustrated Book of the Year.

In 2010, Hayes won the Theodor Seuss Geisel Award for Benny and Penny in the Big No-No! (TOON, 2009). During his career, he created more than 50 books for young readers.

In his final blog post from April 2017, The Intimacy of Small Things, Hayes has powerful advice. Peek:

“If something in you needs caring for — a vulnerability, a disappointment, an emotion, care for it. And do it all with devotion, love and with everything you’ve got.

“Be the guardian of your moment.

“These are such small things, but they open into the big thing, which is boundless.”