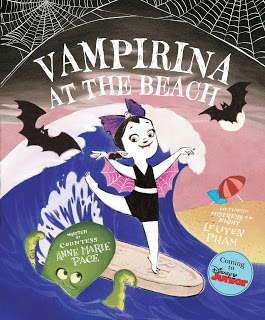 Today we welcome Anne Marie Pace to discuss her latest picture book, Vampirina At The Beach, illustrated by LeUyen Pham (Disney-Hyperion, April 2017) and it’s forthcoming animated series on Disney Junior. From the promotional copy:
When the summer moon is full, a beach trip is an epic way to spend the night.
With her signature poise, Vampirina gears up for a festive time at the beach.

Keeping her ballet lessons in mind, Vampirina demi-plies on a surfboard, leaps for a volleyball, and finishes each competition with style, even if she doesn’t always come out on top.

More than anything else, writing is like solving a puzzle for me, finding the right words to snap into the right place to communicate what I want to say in the right way.

You know how when you’re working a jigsaw puzzle, there’s this huge jumble of pieces waiting for you to build the outer edge and then fill in the middle section by section? At first it feels overwhelming but the more you do, the faster you can move, and it becomes really satisfying to begin to see the art.
With writing, the pieces are words, and you aren’t limited to 500 or 1000—you’ve got tens of thousands, and you get to design the outer edge and you get to create the picture. I find picture books very rewarding because every word—every piece—matters so much.

I don’t have a set schedule the way some authors do. I heard Eileen Spinelli say at Chautauqua years ago that she taught herself to “write in the cracks” of the day, and that’s something I’ve worked on being able to do.

I can see the appeal of setting aside a block of time daily in which you devote yourself to your writing, but with four kids (even though they’re pretty big now), I’ve never been able to count on that time, so it’s better that I simply write when I can, rather than assuming that a particular time of day when I must work will be available to me. 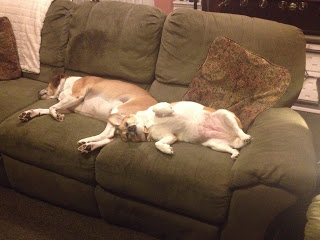 I’m not saying there are never days when I sit and write for hours, because there are, but it’s not a regular thing for me the way it is for some writers.

And I mostly write these days on my green sofa. There’s room for my two cats and two dogs to sit with me, and it’s rather peaceful. They are with me as I type this.


Could you tell us about your new release?


Vampirina At The Beach is the third in the Vampirina Ballerina series.
Vampirina and her family hit the surf in what I’ve referred to from the beginning as “Monster Mash meets Beach Blanket Bingo.” I even watched a lot of Annette Funicello videos on YouTube to get in the beach party mood while I was writing.
LeUyen Pham’s illustrations are phenomenal in this book. The pages are chock-full of surprises for kids to find. And our first editor, Kevin Lewis, whom we dedicated the book to, is honored in the illustrations as Vampirina’s new friend, so it feels special in that way, too. I’m so tickled Uyen thought of that.
Then again, I’m always tickled at the wonderful elements she brings to each book in the series.
What appeals to you about writing gothic picture books?


I’ve thought a lot about this because I’m not really a fan of vampire movies or books, or in fact, any kind of scary element (although my TV viewing does include a couple of police procedural dramas, so maybe real life is scary enough for me).
So why vampires? Five of the six birthdays in my family fall in the autumn months, so as a mom,
October was always a very stressful month, with several birthday parties (even though I throw pretty casual, at-home parties) and four Halloween costumes to create for my kids. So I think Vampirina Ballerina has been a way for me to enjoy the Halloween season that I never enjoyed when my kids were little!

Of course, now I’m getting to know Vampirina outside of her Halloween-y self, and that’s even more fun.


What are the craft challenges of writing a series like this?


There are a few craft challenges that come to mind.
Of course, you want each book to be as inviting to children as the first. Subsequent books need to carry a sense of the familiar without being a complete retread.
Uyen suggested early on that Vampirina grow not only in the course of a story, but over the course of the series, so the theme of making friends has carried throughout.
In the first book, she feels like an outsider; in the second, she learns that she can trust her friends to love her for who she is; and in the third, she befriends someone who fears being seen as an outsider.
The biggest challenge for me with the text is that a lot of the humor comes from puns and words with multiple meanings and I don’t want to be repetitive with either vampire/monster words or ballet terms. Especially with the vampire terminology, I need to be very careful not to cross the line into anything scary. But I want the language in each book to stay fresh.
Tell us about the Disney series. When will it be broadcast? How involved are you?

The Disney Junior series debuts this fall. I don’t know an exact date, but I follow Chris Nee, the executive producer, on Twitter, and at one point, she said it would be before Halloween.

Actually, almost everything I know, I know from Twitter. I am not involved at all in creating the show—Uyen and I do our thing, Disney Junior folks do theirs—so I am watching it unfold like a fan.
I know Chris said there is a “dream cast” so I’m anxious to know whose voices we will hear in October. A lot of the creative people involved have also worked on the award-winning Doc McStuffins, so I feel confident that the property is in the best of hands.
Cynsational Notes 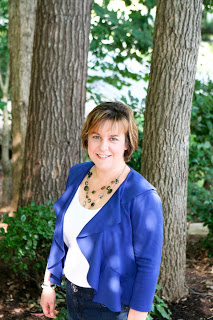 Publishers Weekly gave Vampirina Ballerina a starred review. Peek: “The underlying messages are familiar: there are no shortcuts to achieving an ambitious dream, and persistence and a sunny outlook (even when one is a creature of the night) pay off. But seldom have these lessons been expounded with so much charm.”

She lives in Charlottesville, Virginia, with her husband and four teenagers.